It's extremely ironic that McGavin, one of the breeziest, most likeable of character actors ever would be cast as the most violent, misogynistic, and rage-filled of private eyes. The series was violent by 1950s television standards, but McGavin himself makes no attempt to play Spillane's image of the character. Instead, he's nearly Hammer: The Philanderer Stalker, a private eye slightly more hard-boiled than but basically indistinguishable from his later, popular Carl Kolchak, the gonzo reporter of two hugely popular '70s TV movies and a much less successful series.

A New Video release of an NBCUniversal [no space between the "C" and "U" for some reason], The Complete Series consists of seventy-eight 25 1/2-minute episodes spread over twelve single-sided DVDs. The transfers aren't nearly as pristine as, say, nearly all of CBS/Paramount's classic TV releases of similar vintage (Gunsmoke, Perry Mason, etc.) but it's perfectly acceptable and the shows appear uncut and unaltered. No extras, but with nearly 34 hours of show I'm not complaining. 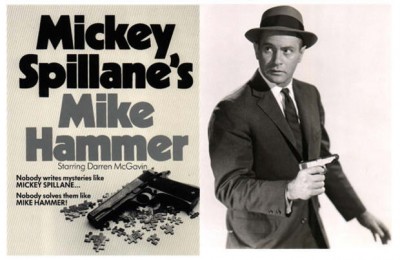 The series is set in New York but was filmed, all too obviously, in Los Angeles. Mike Hammer was produced by Revue Productions, a division of the MCA talent agency, which before buying up Universal Studios was ensconced at the former Republic Pictures lot in Studio City, just northwest of Hollywood. (MCA may have been consolidating talent, too. I suspect Spillane and/or McGavin were probably MCA clients.) A second-unit crew went to New York to film generic shots of McGavin driving around Manhattan, ducking in and out of alleys, entering and leaving various hotels, restaurants, bars, and other buildings. This matches reasonably well with studio interiors - the opening titles of Hammer gazing up at Manhattan's skyscrapers is imaginative - but anytime the script calls for new exteriors and the crew has to rely on Los Angeles locations, the illusion collapses utterly.

Viewers hoping for something as apocalyptic as Robert Aldrich's famous Kiss Me Deadly (1955), featuring Ralph Meeker as Hammer, may be disappointed, but on its own terms this Mike Hammer is surprisingly good. The series is formula-driven but packs a lot of pulpy thrills into its half-hour time slot, ambitiously cramming Byzantine storylines (by TV standards) often incorporating character twists and turns giving it the feel of detective fiction.

Spillane took the money and ran ("I had bigger fish to fry," he later said) and had next to nothing to do with the series, though a few other genre specialists like Evan Hunter/Ed McBain penned shows.

It also helps, in retrospect at least, that it's a contemporary private eye show filmed and set in the fifties, rather than having the additional hurdle of trying to adapt politically incorrect Hammer into more modern, enlightened environments, which the '80s series struggled with somewhat.

McGavin reportedly clashed with MCA over his lighthearted approach to Hammer, but given that the series was already being criticized for its supposed brutality, it's hard to image McGavin getting away with playing him anywhere close to Ralph Meeker's impressively repellent take on the character. McGavin's Mike is a private eye one doesn't mind spending time with every week, hardly the case with Meeker's.

The show is slightly more violent than other fifties shows not so much in terms of the level of the brutality but rather by how it tends to linger on the violence: beatings, for instance, continue on a few seconds beyond the norm of such shows. Mostly though, it's no more violent than the more violent Westerns on television at the time. The fact that Mike Hammer is a contemporary series perhaps made the violence seem more immediate.

The show is packed with the usual busy character actors and actresses that made the rounds of such shows during the fifties and sixties, too many to list here but among the more interesting, and many of whom make multiple appearances: The Ames Brothers (as themselves), Angie Dickinson, Robert Vaughn, Barbara Bain, DeForest Kelley, Keye Luke, Gloria Talbott, Allison Hayes, Yvette Vickers. Nita Talbot, Joan Taylor, Robert Fuller, Gail Kobe, Vito Scotti, and Lorne Greene.

The 78 episodes of Mike Hammer are a bit soft and certainly look like transfers at least a decade old, but even on large-screen TVs the image is reasonably acceptable. Most discs cram seven 25-26-minute episodes per single-sided, dual-layered disc, but they don't suffer too badly, and the 2.0 mono audio (English only, no subtitles) is fine. The episodes are uncut and unaltered, at least the 20 or so I watched for the purposes of this review. No Extra Features.

Though best taken in small doses, (Mickey Spillane's) Mike Hammer is a pretty good series made even better by its irreplaceable star. Recommended.