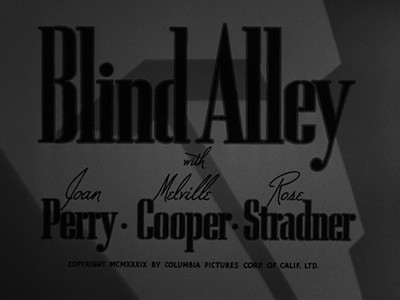 Charles Vidor's adaptation of the play Blind Alley is a lukewarm genre thriller, working typical plot points in a competent fashion but failing to incite much excitement or generate any meaningful suspense.


The story is of a familiar type: a dangerous killer, Hal Wilson (Chester Morris), breaks out of prison with the aid of his girlfriend (Ann Dvorak) and a couple of other hoods, and he takes people hostage and hides out in their house to plot his getaway. In this case, the house is owned by a psychologist, Dr. Shelby (Ralph Bellamy), who has some of his hoity-toity friends over for the evening. Amongst them are a rich couple (Joan Perry and Melville Cooper) with a big age difference, and the younger wife's "friend," a dandy writer (John Eldredge), providing a fine subplot where the two rivals prove who the real man is. More important, though, is the main A-plot that develops as Hal waits for his ride--Shelby's house is on a lake, and a boat is supposed to pick the jailbird up, but the connection is late. While the hours pass, Dr. Shelby begins to work on Hal, who suffers from recurring nightmares and has a psychosomatic hand deformity. If Shelby can crack the criminal mind, he can end the crime.


If one applies some historical perspective to Blind Alley, it probably was rather innovative upon first release. The film was made in 1939, long before Law & Order: Criminal Intent and countless movies and television shows in between made Shelby's interrogation-as-therapy a standard genre device. Despite the screenplay's ability to move between different floors in the house, the three writers pretty much stick to the one room that likely housed the bulk of James Warwick's stage play. Ralph Bellamy plays Shelby as a starchy egghead who meets violence with a practiced calm, while Chester Morris (from the Boston Blackie series) takes the show in his teeth and runs with it. He's quite good as the troubled murderer, and his onscreen breakdown is the best part of Blind Alley. Whereas the writing is familiar and convenient, Morris' performance is still riveting.


And to Vidor's credit, his portrayal of Hal's visions are inventively staged. The actual dream is shot in negative, with great dollops of black rain boxing the gunman in. When Shelby's associative questions eventually lead Hal to dissect this ongoing anxiety and expose the childhood memory that caused the dreams to begin, the director chooses to shoot the sequence as a first-person point-of-view from the young boy's perspective. The sets are built to size, with odd angles and distorted shapes. While so many other filmmakers overdo their "surreal" dream sequences and blow it, Vidor's restraint keeps the visions relatable.


Too bad the rest of Blind Alley feels so blah. It's not really the fault of the stock plot (the film was later remade as The Dark Past with William Holden), because other tales of this kind still continue to put audiences on edge. Vidor never makes the confined space work for him, and his supporting cast approaches the nervy scenario with laconic indifference. Even Bellamy, who had a long career playing detectives and the like (including many films starring as Ellery Queen), seems apathetic to his role. Perhaps he's trying to offset Morris' twitchy menace, but it doesn't quite work. Blind Alley never fully engages in its own material, and so it remains hard for the viewer to engage with it. We should feel like we are immersed in the danger inside the house with the hostages, but we never forget that we are merely sitting and watching from a safe distance. 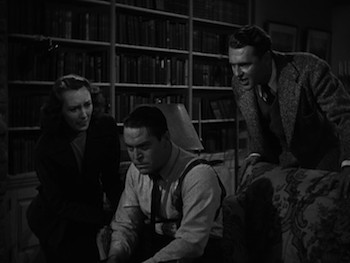 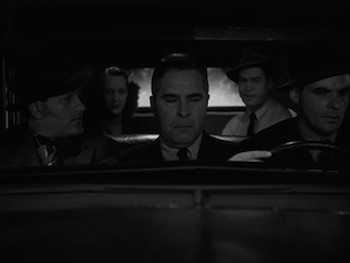 
Released as part of the Sony/Columbia manufacture-on-demand initiative, Blind Alley is a blue-backed DVD-R presented with only minor restoration. That said, the source material must have been in very good shape, because the full-frame black-and-white image looks really nice, with clear resolution and only occasional scratches or damage. Black levels aren't heavy, but they are solid, and though there is some slight fuzziness here and there, overall the presentation is strong.


The original soundtrack is mixed as a mono audio track, and it is very good. Volume is strong without any distortion, and I didn't notice any hiss or pops or anything of that kind.


Rent It. The 1939 crime thriller Blind Alley is a familiar hostage scenario: killer on the run traps a group of people in their own home waiting for his way out. Though this Charles Vidor adaptation of a popular stage play has the added narrative wrinkle of the homeowner being a Freudian psychologist, the script never really transcends the very basic plotting. The movie moves at a languid and predictable pace, though Chester Morris as the troubled bad guy manages to sizzle in just about every scene. Likewise, Vidor's cinematic portrayals of his inner turmoil seem inventive even all these years later. Too bad the rest of the production never quite rises to the same level. A functional old-school nailbiter, entertaining but somewhat forgettable. 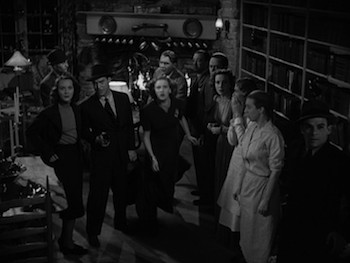 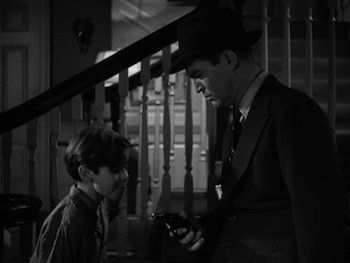