When Arrested Development went off the air, the common opinion seemed to be one of regret, and then as rumor and teasing of a possible movie continues to increase, perhaps some members of the cast are trying to regain their legs in preparation for it. Will Arnett, who played Gob and most recently had been staying on the television comedy landscape in guest and recurring roles in shows like 30 Rock, decided to get back into a more prominent role and carried a sitcom with Running Wilde.

The premise of the show is pretty simple. Arnett plays Steve, a single playboy living off of his father's riches and is free of responsibility. Yet living with all of this opulence Steve finds his life empty, up until an old flame re-enters his life. Emmy (Keri Russell, Felicity) is a left-wing environmentalist with a fiancé in Andy (Arrested alum David Cross) and a daughter in Puddle (Stefania Owen, The Lovely Bones). At first she resists Steve's intentions (which began with inviting her to an awards ceremony that consisted of him received an award from himself), but Andy convinces her to move onto Steve's estate in an attempt to corrupt the proverbial system from the inside. In an attempt to not want to move back to the rainforest that she has grown tired of, Puddle does what she can to keep her mom and boyfriend near Steve. And when she sees the lifestyle, Emmy is certainly wooed by it. Robert Michael Morris and Mel Rodriguez play Steve's assistant and chauffeur, respectively, and Peter Serafinowicz plays Steve's neighbor, whose desire to one-up Steve is only matched by his propensity to mispronounce the "b" and "v" sounds in words. The show's first and only season follows Steve's continued intentions while Maeby, er, Puddle manipulates her mom who occasionally likes things a bit too much for her own comfort. 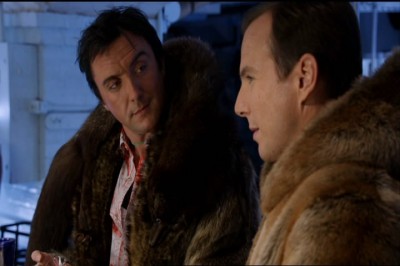 On the surface the show's concept would appear to fall into a slight twist on Green Acres, with the nature lover being the one thrown into affluent surroundings. When you get into the show's execution though, that's where things seem to fall a bit hollow. And it's the characters with which the actors seem to find the most trouble. Russell's prominent role in this more comedic heavy show seems to leave her out of place. She doesn't even play the slightly oblivious female lead well, it's a struggle for her. Owen claims the role of child antagonist and voiceover for many of the show's episodes, but she simply mimics what Alia Shawkat had done so well.

As for Arnett, his fortunes within the role of Steve mirror those of the show. He doesn't seem to know what to do with the character in the first half dozen episodes, yet around the eighth episode "It's A Trade-Off" is where the show seems to find some footing. The personality switch Arnett and Russell perform is funnier than expected, particularly on Russell's end, and from there Arnett finds footing for Steve and the episodes improve as a result. The flip side of the coin? By this point the show was starting to break through the thin ice, and episodes 10-13 aired in April of 2011, long after the show's cancellation had been announced. The show's lack of grounding in the first half of the season sealed its fate, and the cast appears to have moved on, particularly in Arnett's case, as he is now starring opposite Christina Applegate in a comedy for NBC. The one saving grace in the show is Serafinowicz, who comes from a wealth of British comedy and variety shows (and who eagle eyed fans might recognize from several episodes of the show Spaced). No matter the episode quality, his was the most consistently funny effort throughout the show, and I hope he continues to appear in American television for the future. 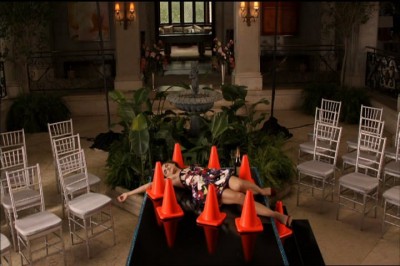 It's almost surprising to see Running Wilde fizzle so quickly. With Arrested show runner Mitchell Hurwitz both at the helm and writer of several episodes, one would assume there would be a little more clarity in vision and direction for this show. However, much like his last effort, Hurwitz was given the time and patience before the plug was pulled, with the difference being this one didn't start out funny and stayed that way until the point of no return. It might set up for a scary precedent if this continues (would a show like Community still be churning out shows into its third season if Fox picked it up?), however in the case of Running Wilde, it was less about network impatience and more of a mercy killing.


13 episodes are spread over two discs and all installments are presented in 1.78:1 anamorphic widescreen, consistent with their original broadcast format. There isn't really much to be wowed about by the transfer, the source material is in great shape and is reproduced accurately, with flesh tones looking accurate and blacks being solid without little crushing issues. There is minimal (if any) noticeable edge enhancement and there are no haloing or image noise occurrences to speak of. Workmanlike if nothing else.


There is a choice of two-channel stereo and six-channel surround sound options, either of which handles the workload without complaint. There are fleeting moments when the subwoofer engages now and again and a marginal level of ambient noise within the rear channels, and dialogue sounds clear as can be. The soundstage isn't expansive, but the show doesn't give it much of a chance to show off if need be. You're not going to be wowed here, things sound as clear as expected.


Running Wilde ultimately fails on all levels regardless of taste. Is it for Arrested Development fans? I don't think so, cameos aside. Is it for television comedy fans? Only if you feel like skipping the first half dozen episodes. With average technical merits and nothing in the way of supplemental material, if you're really hoping to seek it out, go find it on the internet and save yourself some money.