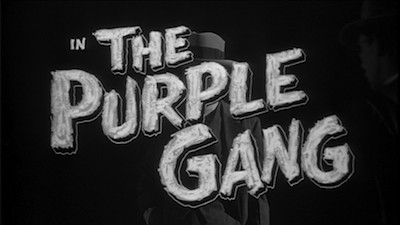 You know you're in for a relatively ham-fisted pummeling when a movie begins with an anti-crime introduction from a law-enforcement official. In the case of the 1959 film The Purple Gang, it's Congressmen James Roosevelt, stymied by the changing camera positions (or maybe he's looking for Michelle Bachmann in the corner), letting us know that despite the good efforts of police to curtail crime in the 1930s, things have only gotten worse. I think it was supposed to make citizens angry enough to behave responsibly, but oy, what a downer.

The real-life Purple Gang was a crew of Jewish youths who terrorized Detroit during Prohibition. The story in the movie version, which was directed by Frank McDonald (a vet of TV westerns) and written by Jack DeWitt (A Man Called Horse), tracks the rise of one particular heavy, Honeyboy Willard, as he organizes other teens to muscle his way into the smuggling racket that brings whiskey in from Canada and eventually ships it off to Chicago for Capone to tipple. Honeyboy is played by a baby-faced Robert Blake, looking far more sinister and deranged than even in In Cold Blood. Honeyboy fancies himself an egghead, but his real asset (and downfall) is being too stupid to be scared. His arch nemesis is Police Lt. William P. Harley (Barry Sullivan, Forty Guns), a by-the-books copper who, tired of the Purples intimidating their way out of prosecution, makes taking them down his singular mission. 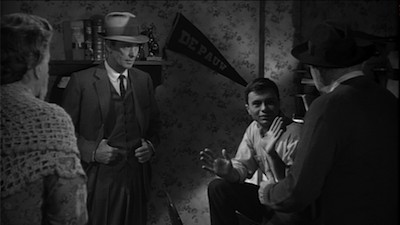 The Purple Gang follows fairly conventional, albeit earnest, docudrama territory. Honeyboy goes from ambitious youth to successful gangster to far too big for his britches, while Harley stays the course, only growing more stoic and determined. Blake is pretty impressive as Honeyboy, his persona not quite solidified, but close to perfecting a sleek menace. To be fair, he is hampered by some simple psychology--Honeyboy's pronounced claustrophobia makes for a pretty obvious plot point--and is expected to switch moods on a dime. He is also flanked by more interesting characters, like his bespectacled sidekick Hank (Marc Cavell, Rabbitt in Cool Hand Luke) who grows a conscience and Detroit's earlier crime boss, Eddie Olsen (Joe Turkell, later the bartender in The Shining and Tyrell in Blade Runner), who rules without violence. There are some fascinating and colorful figures in this story, many shades of Purple, even if the main line is played straight.

There is not much flair to the writing. The Purple Gang is efficient, in and out in under 90 minutes. Most of the scenes are played with a minimum of fuss, approaching a "just the facts, ma'am" level of reportage. There is some laughable editorializing, particularly in an early subplot involving a mealy mouthed social worker (Jody Lawrance). In short, headshrinking is bad, the public are pussies, and we need to slap these kids around*! It's too simplistic to be offensive. In terms of aesthetics, I will give McDonald some credit for his sense of framing. He and cinematographer Ellis W. Carter (The Incredible Shrinking Man) put together artful shots with actors carefully placed around the scenery, flanking one another in ways that mirror their standing in the scene. Also, there are several excellent montages showing Honeyboy's reign of terror, mixing newsreel footage with machine-gun violence.

I don't know how many movies of this kind the studios churned out back in the day. (I reviewed Robert Wise's similarly uptight message pic' The Captive City not that long ago.) This kind of unadorned cops-and-robbers narrative rarely falters, even if it fails to stimulate or elucidate. Fans of good noir will find The Purple Gang a little soft, and it lacks any big melodrama to separate it from the pack of likeminded, less-cynical police stories, but it still works for what it is. 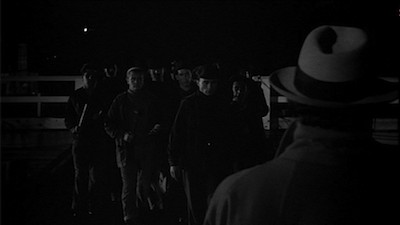 * Freudian slip: In the first draft, I accidentally typed "slap these ids around."

Video:
The widescreen Warner Archives DVD--manufactured on demand as a blue-backed disc--has a fairly decent transfer. There are noticeable scratches and noise on the print, but nothing that obscures the image or lessens the viewing experience. Resolution is above average, with decent blacks and an overall clarity and contrast.

Sound:
The mono mix of the original soundtrack is solid, with good volume and no off-putting distortion or extraneous sounds.

FINAL THOUGHTS:
Frank McDonald's 1959 The Purple Gang is an entertaining if underwhelming take on a true story. Documenting the crew of young toughs that terrorized Prohibition-era Detroit and the cop that brought them down, it was part of a wave of anti-crime pictures the Hollywood studios made to show they weren't just about exploitation. Much of the story is by numbers--hotheaded thug takes over the gang, dedicated police detective doesn't rest until he takes him down--but some fine supporting players and the director's facility for artful framing keep it interesting. The Purple Gang is also notable for a young Robert Blake deviously chipping away at his craft as the main gangster. The Purple Gang is lacking in surprises, but dependable. Rent It. 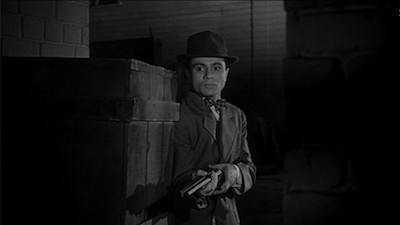