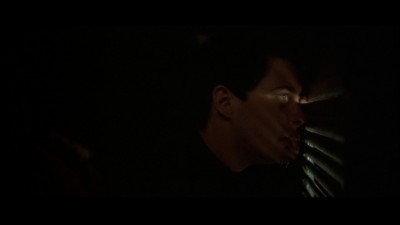 Please Note: The screen captures used here are taken from the 2002 DVD release, not the Blu-ray edition under review.

Whenever I feel obliged to wrack my brains and recall some of the rare, precious bright spots of the 1980s (usually when confronted with the all-too-true conventional wisdom that that decade was culturally moribund and downright reactionary after the political questioning and artistic aspirations/freedoms of the '70s), what comes immediately to mind is The Smiths for music and, for the cinema, David Lynch's sublime Blue Velvet. If anything was going to redeem the Reagan area--with its brazenly ignorant longing for a falsely remembered 1950s with white picket fences and no troublemakers to criticize or threaten The Way Things Just Are and Always Have Been--it was going to be Lynch's own fascinating, rich, daring, and beautiful plunge into that same over-perpetuated American dreamscape. Much better than the triumphantly retrogressive leaders of the time or their nostalgia-and-marketing-overdosing Hollywood counterparts, Lynch knew that dreams, like so many great movies, are alluring and thrilling because they're excessive and unpredictable; they captivate, enthrall and frighten not despite, but because of the fact that they're challenges to the everyday status quo, not comfortable or reassuring reinforcements of it. 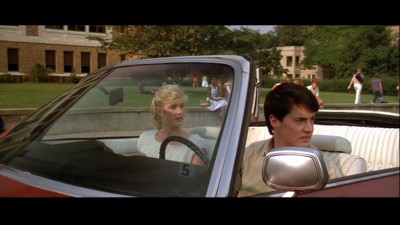 Which is not to say that Lynch's great film--his return, after the disaster of Dune in 1985, to the true artistic path he had previously set himself on with Eraserhead and The Elephant Man--is really much of a social commentary or "political" in a direct way. I admire American Beauty as much as anyone, but such crisply intelligent satire-with-a-heart pales in comparison to the blazing vividness of dream and nightmare that Blue Velvet brands onto the screen in all its illogical, seductive, all-consuming glory and horror. The characters through whom we enter this dream/nightmare are Jeffrey Beaumont (Kyle MacLachlan), a college student returning to his little Northwest town of Lumberton after his father has narrowly survived a heart attack, and Sandy Williams (Laura Dern), a high school senior and daughter of the police detective to whom Jeffrey presents a severed ear he has discovered while ambling desultorily through a field. Jeffrey and Sandy are both good, bright-eyed and bushy-tailed, "all-American" kids drawn together by their shared curiosity and fascination for what this ear and the obvious violence it signifies means: a world of dark things that are hidden from them and from which they have always been protected--a fruit of knowledge whose temptation overwhelms their cautious resistance. 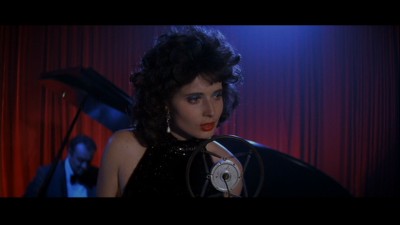 So the two junior detectives, tantalized by both the mystery they find before them and one another, set about sleuthing, soon realizing they're in way over their heads but unable to stop themselves as they follow the clues they're able to patch together to an apartment on the wrong side of the tracks. Once Jeffrey sneaks and tricks his way inside, this shady place turns out to be the fantastically set-designed and intricately lit stage (the walls are pink!) upon which unfolds the tragic existence of Dorothy Vallens (Isabella Rosselini), a nightclub chanteuse whose tortured life and aura of troublingly "unhealthy" but exciting, violent sexuality lures Jeffrey to emotional and physical places he surely never imagined himself capable of entering--and directly into the path of the psychotic small-time criminal Frank Booth (Dennis Hopper, in the performance of his career), who has kidnapped Dorothy's husband and little son, holding them for ransom under the threat of violence as coercive motivation for Dorothy to allow him to inflict his deep abyss of horrifying sexual rage onto her. Frank is the demon, the usurping and evil father who must be killed by Jeffrey's Oedipus in order to save (and have, to good-girl Sandy's heartbroken, mind-boggled consternation) Dorothy, the beautiful and victimized mother figure. 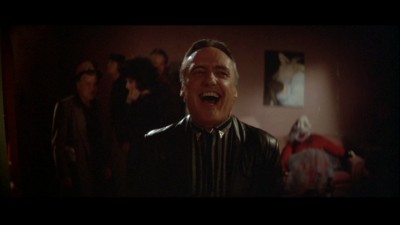 It actually is on just that Freudian/mythological plane that Blue Velvet, like a fairy tale, operates. Even though its deeply conflicted, repressed subconscious material manifests itself--with its anachronistically un-modernized small town and strangely appropriate, evocative popular tunes from a bygone era--through a particularly American pop-cultural idiom, there is some permanent, primal structure here that underlies (and is, according to Lynch's vision, an integral part of and foundation for) Lumberton's impossibly sunny skies and happy, healthy families. But the film entirely earns and justifies its ambitious, mythological scope; there is not a moment of pretention in the entire unsettling, submerging experience. Working with a team of cinematic artists in top form--cinematographer Frederick Elmes, sound designer Alan Splet, composer Angelo Badalamenti--Lynch gives every scene the feel of something not symbolic, exactly, but iconic; he borrows and heightens a thousand vaguely, almost subliminally familiar cinematic archetypes and conventions, working with these like colors on a painter's palette to create a gravity, a tone of conviction that, despite the film's intentionally anachronistic, melodramatic, anti-naturalistic visual and performance styles, leaves all winking, knowing camp and even Tarantino-style loving homage far, far behind. At every moment, from its opening credits that appear over a close-up of Dorothy Vallens's shimmering-blue bathroom waving like a stage curtain to its final, perfectly artificial and surreal image of a fake robin gnawing on a writhing, creepy-crawly bug (in the film's code, the beautiful doing its bit to check and balance out the ugly), the film is a privileged experience of the sort only a true, great artist can give us--a dream that sacrifices none of its effect just because we're wide awake for it.

In my personal valuation of Lynch's body of work, he outdid himself and attained his greatest achievement to date with Mulholland Drive (2001), but that only means that, with Eraserhead in 1977 and Blue Velvet in 1986, he has been able, remarkably, to come up with a incomparable, enduring masterpiece for each decade of his career. Blue Velvet is, indeed, perfect, which is all the more awe-inspiring when one considers the mighty risks it takes and all the potential obstacles it surmounts. It is not only easily the best, most original American film of its time, but a timelessly great milestone of the cinema that bears the hallmarks of a great work of art in any medium. 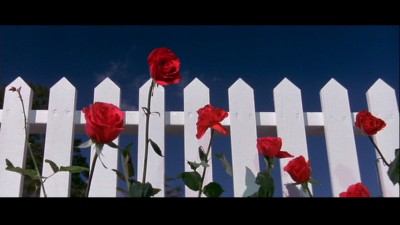 
David Lynch is a stickler when it comes to home-video releases of his films, and the AVC/MPEG-4, 1080p, 2.35:1 aspect-ratio anamorphic widescreen transfer, presumably taken from the Lynch-supervised digital restoration of 2002, looks spectacular on Blu-ray. The vividness, stability, and smoothness of all colors, textures, and skin tones are a noticeable improvement from that prior DVD release (which was already nothing to sneeze at). A cinematic masterpiece has really been given its due; Blue Velvet has always been visually ravishing, but it has never looked better than it does here.


Sound is another Lynch forté (the soundscape is always much more of a significant, idiosyncratic, and carefully crafted presence in his work than in most other films), and the 5.1 DTS-HD Master Audio soundtrack delivers it at maximum richness, fullness, and clarity. Every sonic element is beautifully balanced, from the basics of dialogue and ambient sound to all the Lynchian pop classics and ominous rumbles. Sound quality-wise, Angelo Badalamenti could be conducting his synthesized orchestra right there in your living room, and you may as well be in the nightclub audience as Rossellini unforgettably intones her torch rendition of the title song.


This Blu-ray edition's extras are mainly holdovers from MGM's 2002 DVD release: Mysteries of Love, a 75-minute documentary on the making of the film, which features copious interview footage with Lynch (archival, from around the film's release; he evidently did not participate in the making-of) and more current interviews with the cast (including MacLachlan, Dern, Rossellini, and Hopper), various crew members (including editor Duwayne Dunham and cinematographer Frederick Elmes), and composer Angelo Badalamenti, the beginning of whose long-running collaboration with Lynch is represented by Blue Velvet. Everyone openly and honestly shares their personal recollections, with tons of intimate (and sometimes conflicting) memories about the film's production and reception, as well as many technical tidbits on how Lynch and company worked painstakingly to give it its look and feel. It all adds up to a thorough and insightful look into how and why the film was made and what it meant to those who were there. A brief extra called "Vignettes" appears to compile a handful of outtakes from the documentary, with a clip of Lynch talking about his love for McDonald's Filet-O-Fish/chocolate shake/fries combo, and another of Rossellini responding to unfounded charges of misogyny against Lynch by comparing the film to Sita, a novel by radical feminist Kate Millett. The film's half-menacing, half-alluring theatrical trailer, as well as two TV spots. There is also the legendary clip from a 1986 episode of "Siskel & Ebert at the Movies" in which Roger Ebert gives his notorious, hilariously wrongheaded rejection of the film for reasons obviously so personal that one is forced to presume he harbors some (too) personal fantasy of being a chivalrous knight saving the victimized Isabella Rossellini from the rampaging woman-hater David Lynch (a take roundly dismissed by Rossellini and ignored by Lynch save for his wicked inclusion of Ebert's folly on every release of Blue Velvet to date). There are also A Few Outtakes--a couple minutes of especially mirth-inducing bloopers that was not included on the DVD release. The stills gallery from the DVD release has not been included on the Blu-ray.

The big coup of these Blu-ray supplements, however, is 51 minutes of newly found, never-before-seen "lost" footage (obviating the need to include the still-photo-based "deleted scenes montage" from the DVD). It is easy to see why these scenes were cut out, though some of them (involving Hopper/Frank going on a rampage in a particularly bizarre pool hall during his road trip to hell with Dorothy and Jeffrey) would have broadened the scope of the film's surrealism. What we mainly see here are Jeffrey at college being called home by his mother after his father's heart attack, as well as additional scenes of his homecoming and interactions with his family (including some added drollness with the constantly perplexed Aunt Barbara). The film didn't need these scenes, but for anyone who loves it, it's like getting some captivating (if unnecessary) backstory on these familiar characters. This footage was evidently lost for years and only recently miraculously rediscovered; Lynch expresses his amazement and gratitude in titles that appear before and after the footage runs, and fans of the film are bound to second his emotion.


Blue Velvet has all the disturbing, uncanny, visceral power of an especially vivid and troubling dream, but its brilliantly realized dream-exploration of eternally interconnected, mutually dependent light and dark, love and brutality, goes beyond the territory of horror-movie nightmare and into the realm of resonant, stirring, unsettling myth. One has little trouble picturing Blue Velvet remaining meaningful to viewers hundreds of years from now in the same way that Sophocles and Shakespeare can still strike a chord with contemporary readers. Here's hoping that that future audience will have access to a version of the film as conscientiously, meticulously, and felicitously rendered as this unsurpassable Blu-ray edition, which has a rightful place in the library of any serious film aficionado. DVD Talk Collector Series.