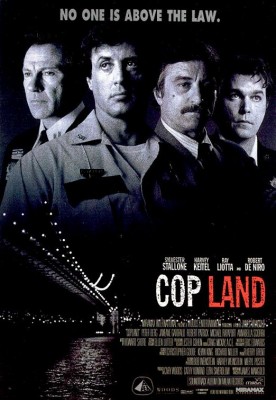 Before he walked the line, Director James Mangold directed this under-seen, star-packed drama set in a New Jersey town just across the river from Manhattan. Cop Land gets it title because the fictional town of Garrison is inhabited almost exclusively by the New York City cops who founded the place as a haven away from the crime downtown. Sylvester Stallone plays Sheriff Freddy Heflin and leads a cast that includes Harvey Keitel, Ray Liotta, Robert De Niro, Janeane Garofalo, Robert Patrick and Peter Berg. The story is standard-issue, but a slew of powerhouse performances and Mangold's technical eye make Cop Land a solidly entertaining police drama.

Patrolling the streets of Garrison has earned Heflin little respect from the city cops, who order him to turn a blind eye to spousal abuse and drunken driving. Lieutenant Ray Donlan (Keitel) looks after the boys in blue when they're home, and tells Freddy that he trusts him to look after his family while he is at work. When Ray's nephew, Murray Babitch (Michael Rapaport), kills two unarmed African-American teens while on duty, several cops help him stage a suicide and go into hiding in Garrison. Soon after, an internal affairs investigator from the New York Police Department, Moe Tilden (De Niro), already familiar with Ray's shady past begins putting the heat on Freddy to expose the corruption in cop land.

Stallone took a huge leap away from his typical burly roles in films like Rocky and First Blood to play Freddy, who is deaf in one ear and more than a little slow on the uptake. The actor put on weight and adopted a sluggish gait, and his understated performance here is some of his best work. Freddy's torment is constant as he watches the woman he secretly loves and once saved from drowning (Annabella Sciorra) suffer through a violent marriage to one of Ray's boys, Joey Randone (Berg). This rescue is what cost Freddy his hearing in one ear, and that condition cost him a spot at the NYPD.

What I found most interesting about Cop Land is its depiction of life in a town where men only return to sleep and drink and relationships rarely stray outside the city limits. When a rookie deputy (Garofalo) pulls over Ray for doing 70 in a 25 mile-per-hour zone, Ray tells Freddy to remind her of the rules. The city cops are untouchable, and each pulls from the pie to support the home front. After coke-addict Gary Figgis (Liotta) challenges Ray, he gets shot down to Garrison to partner with Freddy, and becomes his only ally as internal affairs turns up the heat. Mangold, directing only his second film, is adept at staging the slow-burn, and he avoids allowing Cop Land to spiral into melodrama.

This type of corrupted-badge thriller is nothing new, but Mangold wisely focuses on the performances and not over-the-top shakedowns. Alongside Stallone, Liotta's live-wire intensity and Keitel's assured toughness are the two best performances. De Niro is good, but his reserved character is never afforded the chance to really chew up a scene. The medley of other famous faces is great, and each actor plays his role without vanity. I especially enjoyed the knock-about swagger of Berg and Patrick, and even the brief performance by Cathy Moriarty as Ray's wife is a welcome addition. Despite its excellent cast, Cop Land feels nowhere near as familiar as the seminal work of its leads, but its quick pace, confident direction and well-stocked cast make it a very solid film.

The 1.85:1/1080p/AVC-encoded transfer on this single-layer disc is pleasing but not without flaws. Detail and texture are often quite impressive, and the image pops with bold, well-saturated colors. Somewhat uneven is the grain structure, which ranges from minimal to quite oppressive in certain darker sequences. Black levels are strong, and crush is only an occasional problem for the film despite the large number of nighttime sequences. Sharpness varies and some scenes are noticeably softer, but there are more than a few shots with impressive facial and background detail. Digital noise reduction does not seem to be much of a problem, but there is moderate edge enhancement in some scenes.

The 5.1 DTS-HD Master Audio soundtrack is surprisingly rich and effective. Dialogue is clean and crisp, and, while I did notice a few sound bridge and dubbing anomalies, I found no technical problems with the track itself. The surround speakers are quite active during action sequences, and they also support subtle ambient effects. The film occasionally uses a high-pitched hiss to represent Freddy's deafness, and this effect is maddeningly effective. The LFE rumbles to life on multiple occasions, and the track is consistently deep and loud. English, English SDH and Spanish subtitles are also available.

The Blu-ray only includes the Director's Cut of Cop Land, which runs 1:56:16. The audio commentary with Writer/Director James Mangold, Actors Sylvester Stallone and Robert Patrick and Producer Cathy Konrad is a good sit. Mangold talks about writing the film as a western, recalls wrangling the large cast and points out differences in the director's cut. Stallone reveals how he gained weight and what it was like to work with De Niro and Keitel. Cop Land: The Making of an Urban Western (14:21/SD) covers a lot of ground during its short running time. The piece highlights pre-production, casting, filming and editing, and features interviews with the cast and crew. The Storyboard Comparison (1:59/SD) covers the film's final showdown, and two deleted scenes, "Car Chase" (3:14/SD) and "Profile" (1:39/SD), offer interesting material cut for pacing reasons. Lionsgate also includes several bonus trailers.