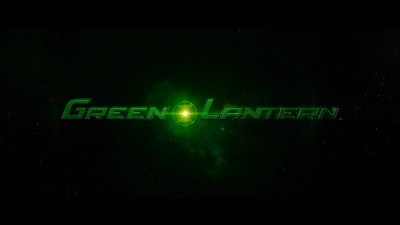 Ryan Reynolds and director Martin Campbell took a lot of flak for the seemingly cobbled-together Green Lantern when it tumbled into theaters last summer stinking of last-minute studio intervention. The film adaptation of the DC Comics character gestated in Hollywood for a number of years, but the final product is ultimately disappointing. The stop-start narrative is often silly, and, while the action takes place throughout the galaxy, the film is sluggish in spots. Reynolds puts on a good show amid the flashy special effects, but Green Lantern is one very uneven motion picture.

The Green Lantern character is not the most realistic in the DC Comics arsenal, and his back-story is quite fantastical. The Guardians of the Universe harvest the green power of will and create an intergalactic police squad called the Green Lantern Corps. The guardians split the universe into many sectors, and send a Green Lantern to protect each sector. Each is granted great power limited only by the imagination, and each is only vulnerable to the yellow power of fear. Green Lantern Abin Sur (Temuera Morrison) imprisons villainous Parallax (Clancy Brown), who harvests this yellow fear, on the lost planet Ryut. Years later, Parallax escapes his chains and gravely wounds Abin Sur, who falls to earth to find a replacement Green Lantern. This turns out to be brash aircraft test pilot Hal Jordan (Reynolds), a man lacking the moral backbone of the other Lanterns. 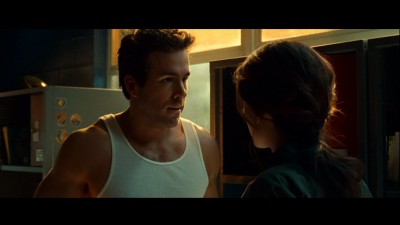 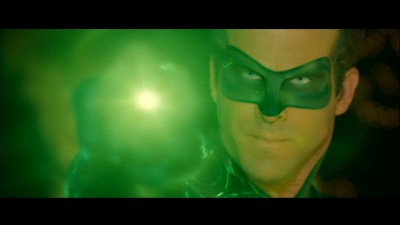 The opening of Green Lantern is decent enough: Young Hal and childhood friend Carol Ferris (Blake Lively) witness Hal's father die in a fiery plane crash, an event which sets up Hal's future reckless behavior. Twenty years later, Hal's bed is a revolving door, and his closest relative is a young nephew. Both Hal and Carol fly for Carol's dad, Carl Ferris (Jay O. Sanders), at Ferris Aircraft, which lands a contract with the government through Senator Robert Hammond (Tim Robbins). Hal's knighting ceremony occurs only after he discovers Abin Sur dying in his crashed spacecraft. After Hal figures out the proper oath to activate his newly earned powers, he is carted away to planet Oa, where Corps leader Sinestro (Mark Strong) sends him through training with Tomar-Re (Geoffrey Rush) and Kilowog (Michael Clarke Duncan). To say Hal is reluctant to start saving the world is an understatement. Quite a bit of screen time is devoted to Hal psyching himself out. All the while, monstrous Parallax comes closer to earth and begins to influence Senator Hammond's son, scientist Hector Hammond (Peter Sarsgaard).

Post Batman Begins comic book adaptations have tried very hard to be serious. Green Lantern is definitely not serious, and it harkens back to the campy adaptations of the '90s. When Green Lantern is forced to save Senator Hammond from his increasingly evil son, he does so by cradling the senator's stricken helicopter in an imagined neon green racecar that travels a course in the sky. Other expressions include a giant fist and a pair of lifesaving fighter jets. The film's narrative is perpetually moving, but not all of it is interesting. Quick scenes from various locations in the galaxy are interspersed with moments of Hal moping about. The action is mostly stranded on earth, where Hector Hammond becomes a more immediate villain than Parallax. More interesting are the scenes on Oa and in the far reaches of space, where the Green Lantern Corps tries to stop Parallax from getting stronger. 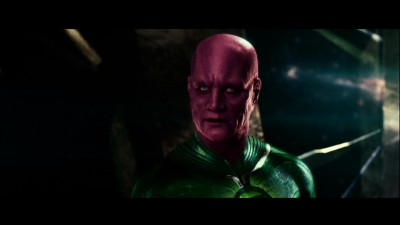 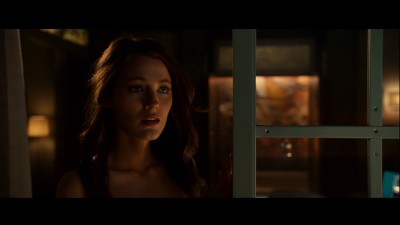 Green Lantern is an effects-heavy film, and director Campbell (Casino Royale) chose to create most sets and alien characters with CGI. Without a lot of practical effects, Green Lantern is sometimes easy to tune out. The battles do not resonate as they should, and some effects look downright unfinished, such as the early jet crash. The response to the first images of Hal's completely digital suit was tepid, and the CGI costume never looks particularly real in the final film. Parallax is intimidating, but the massive, amorphous monster does not blend well with live actors. Oa and its inhabitants are beautiful, but the planet is only briefly explored. Makeup effects vary in quality; Sinestro is subtly effective, while the rapidly expanding forehead of Hector Hammond looks downright comical.

Reynolds clearly understands the ridiculousness of his character, and never takes the proceedings too seriously. Even so, Reynolds' performance is good when he is called upon to show emotion. Lively received scathing disapproval for her work in Green Lantern, which puzzles me. She does a fine job as Carol, and I like her character's no-nonsense response to Hal's new-found occupation. The first time Carol sees Hal in costume, she chastises him for thinking she wouldn't recognize him. Robbins is good as the slimy senator, and Sarsgaard really hams it up as Hector Hammond. His energy is admirable, but the part is scantly written. Strong is good as Sinestro, though he is given little to work with. One of Green Lantern's greatest flaws is its underwritten secondary characters. 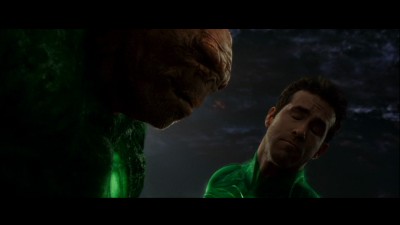 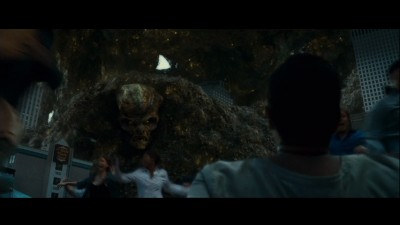 Something about Green Lantern just doesn't click. It seems like the film got away from Campbell, whose work did not impress Warner Brothers. The studio apparently made some strong suggestions after a dismal test screening, although it did provide money for extra special effects. For a film with so many locations and action scenes, Green Lantern can be awfully boring. It may not be a case of too much character development, either, as the narrative often feels rushed. Without the proper foundation for certain stories and character arcs, payoffs are neither earned nor appreciated. Had the filmmakers had the time to re-edit the picture, it may have played stronger. As it stands, Green Lantern is a sporadically entertaining mess. Most of the parts are there, but Campbell assembled them incorrectly.

Green Lantern sports a sparkly 2.40:1/1080p/AVC-encoded transfer that replicates its theatrical presentation. The film's smooth look at first glance seems to indicate the use of digital noise reduction, but theatrical prints exhibited this same quality. Detail is generally good, although Green Lantern is definitely not a gritty film. Sharpness is deliberately tempered, but the image shows nice depth and texture. Colors are bold and well saturated, and skin tones are natural. Some have complained about the transfer being too dark, but I only noticed slightly questionable contrast once or twice. There is some black crush, but this is limited to a few scenes. Compression artifacts, aliasing and edge enhancement are never a problem. Overall, this is a nice transfer that supports the film's intended look.

The film's 5.1 DTS-HD Master Audio soundtrack is rambunctious, with a punchy LFE and solid surround work. Dialogue is crisp and clear, and directional dialogue is frequent. The effects resonate throughout the sound field, and the surround speakers are heavily utilized. Sound pans travel through the rear and side panels, and the subwoofer comes alive during the frenetic action sequences. French, Spanish, Portuguese and Thai 5.1 Dolby Digital tracks are also available, as are English SDH, French, Spanish, Portuguese, Indonesian, Korean, Mandarin and Thai subtitles.

Green Lantern arrives on Blu-ray in a "combo pack" release from Warner Brothers that includes the Blu-ray, a DVD copy of the film and an UltraViolet digital copy. UltraViolet is a cloud-based system that allows users to stream their digital copy to computers, phones and other electronic devices. This is something new for the studio, which previously provided iTunes-compatible digital copies. The discs are housed in a Blu-ray eco-case, which is surrounded by a shiny reflective slipcover. Additionally, Warner Brothers provides a code for a free downloadable add-on to the upcoming "Batman: Arkham City" videogame. Two cuts of the film are offered on Blu-ray: the theatrical cut (1:54:00) and an extended cut (2:03:39), which adds scenes of character development and is the stronger of the two. I particularly like the material added of Hal, Carol and Hector Hammond as children. Warner Brothers also provides a slew of worthwhile bonus features: 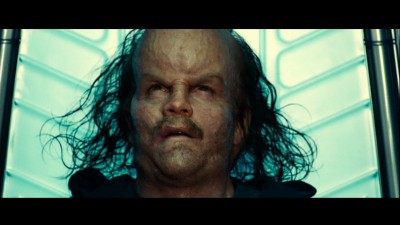 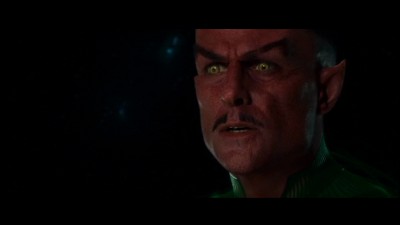 Green Lantern is certainly the weakest of this year's major comic book adaptations, but the film is not a total failure. Ryan Reynolds is in high spirits as Hal Jordan, who is selected to join an intergalactic peacekeeping force known as the Green Lantern Corps. Director Martin Campbell struggles to balance the choppy narrative with special effects and human drama, and the film feels both rushed and sluggish. The uneven tone and underdeveloped characters are troublesome, but Green Lantern provides just enough flash to warrant a viewing. The extended cut is an improvement, and Warner Brothers' Blu-ray features excellent picture and sound and a slew of great bonus features. This is a solid package, but the uninitiated should first Rent It. 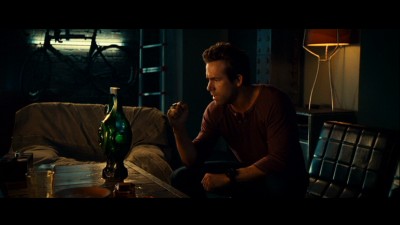