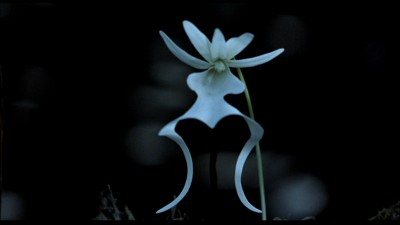 Please Note: The screen captures used here are taken from the 2003 standard-definition DVD edition, not the Blu-ray edition under review.

It's strange to be speaking of Adaptation in the past tense; I vividly remember rushing right out to see it upon its release nearly a decade ago. But here we are in 2012, with the film's two auteur-stars--director Spike Jonze and screenwriter Charlie Kaufman--having since bumped up against public (and some critical) resistance with, respectively, Where the Wild Things Are (2009) and Synecdoche, New York (2008). I liked Wild Things and was profoundly ambivalent about Synecdoche, but Adaptation catches this kindred-spirit director/screenwriter pairing at its post-Being John Malkovich height, and the film is more confident, mild-mannered, and nonchalantly insouciant than anything either of the two has been involved with since. I never considered Adaptation truly great or any kind of masterpiece, but its understanding of the creative mind's overpowering desire to create a masterpiece free of compromises or pandering, with full artistic integrity intact (as well as the terror and hesitancy associated with such high standards), gave it a singular appeal. And that appeal, helped along by the sagacity of Jonze and Kaufman's gently persistent, pretension-deflating light touch, holds up surprisingly well. 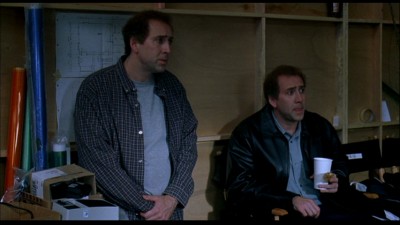 The fear of artistic failure is embodied in the film by "Charlie Kaufman," our screenwriter (played by Nicolas Cage), who's just experienced big success in the form of having his Being John Malkovich screenplay produced. But Charlie doesn't feel successful; he feels like just as much of a shunned, anxiety-ridden loser as before. Immediately upon being hired to adapt New Yorker writer Susan Orlean's bestselling nonfiction book The Orchid Thief, about one eccentric, backwoods-dwelling Florida man's overriding passion for rare floral specimens--a devotion that cool, successful New Yorker Orlean found captivating in its obsessiveness--Kaufman is visited by his twin brother, Donald (also Cage, of course), who decides he'll stay for a while and, infuriatingly, begins to blithely toss off his own screenplay, employing the guaranteed-success principles of real-life screenwriting-seminar guru Robert McKee (played here by Brian Cox). The Kaufman twins are physically identical (as played by Cage, who gained quite a number of pounds and submitted himself to a schlubby wardrobe for the role, they're sweaty, balding, middle-aged dorks, of which it is easy to believe there actually are at least a few in the world of professional screenwriting), but personality-wise, they're yin and yang. Charlie is uptight, intellectual, cultured, artistically ambitious, and self-loathing; Donald is dense, crude, blissfully content with mediocrity, and likes himself just fine, probably too much. (Which one do you think the film asserts is more apt to find success in Hollywood?) Charlie has been too-circumspectly courting his violinist sweetheart (Cara Seymour) for months and is in perpetual danger of losing her despite her affection for him; Donald hits it off right away and enjoys a robust romantic and sexual life with his (Maggie Gyllenhaal). Outside the film, in the real world, Charlie Kaufman has no such sibling; "Donald" is not a twin but a doppelganger, and he represents that cheerful, confident, easygoing vulgarian lurking inside anyone who concerns themselves with the Artistic, the Serious, and the Important--the part that shamelessly displays its bad taste and conforms easily just because it's less trouble, the devil on our shoulder hectoring us to lighten up already, making us suspect that all our hand-wringing and brow-furrowing are for naught. 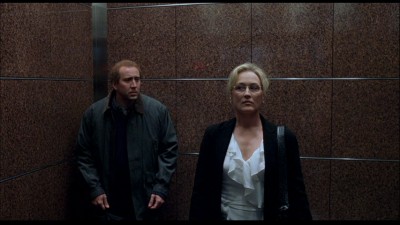 Meanwhile, flashbacks play out the story contained in Orlean's book, with Chris Cooper (who won an Oscar for his performance here) as John Laroche, the orchid thief of the title, and Meryl Streep as Orlean. These flashbacks, along with the film's flashes-forward to Kaufman's writing of the screenplay (for the film we are soon discombobulated to realize is playing out in front of us, up to and including the scenes depicting the writing of its screenplay) as well as its flashes-sideways, as when Charlie goes to New York to tremulously consult with Orlean and finds himself humbly seeking out the aid of his twin's ridiculed script guru (after which much of the final third finds us in what seems to be Donald's cheesy car-chases-and-guns script), are assembled, through the unprepossessingly nimble and fine-tuned work of editor Eric Zumbrunnen, to create different layers that keep feeding into and off of each other, escalating the film's frenetic cleverness, self-reference until we have spun so centrifugally far out from Orlean's story and its anticipated cinematic telling that there is no going back. The question at the core of the film, its dramatic conflict, thus slides from being whether or not Charlie Kaufman will be able to adapt The Orchid Thief into a suitable screenplay to whether the high-minded, neurotic, ambitiously intellectual but eternally self-defeating Mr. Kaufman will be able to "adapt" to the more vulgar (and vital, immediate, gratifying) side of life with the aid of his imaginary twin brother, into whom he's compartmentalized away all his spontaneity and appetite-driven dumbness, and whom he must learn to stop ridiculing if he ever wants to escape his own frazzled head and enjoy life. Yes, ladies and gentlemen, what Adaptation is ultimately all about is its screenwriter's quest to forgive and embrace the side of himself that's a joyous, carefree, simple, undignified-and-loving-it, face-licking puppy, and stop letting the dominant, bookish-scold, Artistic part of himself kick the poor thing around. 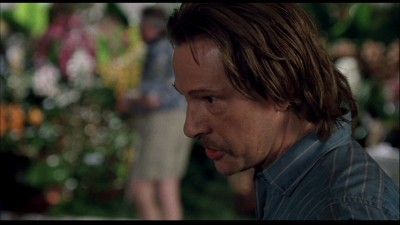 But somehow, there's no disappointment in that, or in never getting our adaptation. If the foregoing description makes the film sound like it has its head much too far up its own posterior to ever be any good, what saves it absolutely from any intolerable narcissism or self-regard is Kaufman's insightful wit, his merciless willingness to mock himself and his own aspirations/pretensions. The film is self-involved to the nth degree, of course, but it is done with enough of a light touch and perspective that the self-involvement (unlike the out-and-out self-pity of Synecdoche, New York) is completely forgivable. Jonze and DP Lance Acord (whose keen sense of what seemingly effortless, deceptively simple-looking meldings of light and color can do for a film's imagery, which bloomed fully in Sofia Coppola's Lost in Translation the following year, is already in prime form here) do their visually and tonally on-key best to keep up with Kaufman's wildly inventive musings, and they pull it off for the most part, their memorable flights of visual fancy including a number of intriguingly-shot florophilic moments and a sped-up visualization of Kaufman's imagination of his story from the beginning of evolutionary time to the present moment that's like a tossed-off version of what Terence Malick would do (with much more sobriety and at much more length) years later in The Tree of Life. 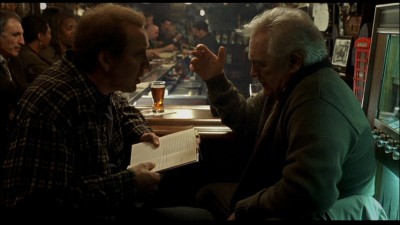 Adaptation isn't all that deep, but it's also never earnest or overbearing enough to convince us that it even intends to be profound; part of what it's about in the first place is letting go of such strenuous strivings and allowing for the validity of the lighter and less consequential side of things, including movies. Instead of depth, we get Jonze and Kaufman's elaborate cleverness-with-heart, which actually works better than it should. Good as it is, what Adaptation may most usefully represent is not so much an unqualified high point in postmillennial indie film as the exact furthest extent to which mere cleverness--leavened with enough self-awareness, self-effacing wit, real lightheartedness, and thoughtfulness--can be taken, which the film convinces us is surprisingly far.


The 1080/24p-mastered, AVC/MPEG-4-encoded transfer, presented at its correct theatrical aspect ratio of 1.85:1, is very, very good. There were absolutely no problems with skin tones, colors, edge enhancement, aliasing, or any other compression artifacts, and the nice, soft, gentle way DP Lance Acord has with light and color comes through perfectly, without any of the fine celluloid grain digital-noise-reduced out. This is one of those instances where a good, visually very worthy film has been given a great transfer.


The disc's DTS-HD Master Audio 5.1 soundtrack is also very well done, with all of the film's dialogue, sound effects, and Carter Burwell's sometimes half-satiric, sometimes tenderly melancholy score all coming through in a clear, resonant, and beautifully balanced way, with no distortion or imbalance whatsoever.


Nothing other than a two-minute "back to the swamp" montage of camcorder footage with Jonze, crew, and cast, which was shot on location whilst they filmed an Adaptation scene set in a Florida bog.


Adaptation's audacity and the apparent ease with which it pulls off its elaborate but oddly miniaturized, 100% self-contained and self-limited vision is probably not as impressive as it first appears; there is some sleight-of-hand going on here, something that feels too coy and evasive, as if the film exists only to let itself off the hook by being not a great film, but rather a good film that settles for being about the unbearable stress and strain of wanting desperately to make a great film. Still, it's highly entertaining, amusing, and even compelling in a way to watch screenwriter Charlie Kaufman (or at least some half-fictional version of himself) use a fairly typical book-adaptation assignment as a springboard to an unfettered dramatization of all the convoluted dialogues and heated arguments a neurotic, high-strung artistic temperament is bound to have with itself. Adaptation neatly sidesteps the self-contentment or overbearingness that could so easily have been its downfall. As self-aware and self-deprecating as its terminally awkward but endearing protagonist, it allows itself enough looseness and openness to become an unusually smart lark that does, after all, have some genuinely discernible, if frustrated, passion coursing through its extensive yet enclosed networks of metafiction and self-reference. Recommended.