MGM // Unrated // November 15, 2011
List Price: $29.99 [Buy now and save at Amazon]
Review by Stuart Galbraith IV | posted November 29, 2011 | E-mail the Author
I've seen West Side Story (1961) three or four times through the years, including a screening at MGM back around 2002, apparently during the early stages of its restoration, but it wasn't until I saw this particular Blu-ray that finally I was able to see past its many flaws and appreciate its equally abundant achievements. Both the Broadway show and the mostly faithful movie musical reflect the transformative growing pains each was undergoing at the time, and the film certainly plays a lot better if you can imagine yourself in the audience watching a roadshow performance in 1961, when for many it was a truly revelatory experience.

I've always struggled to get beyond the miscasting of Natalie Wood and (especially) Richard Beymer in the leading roles, the sometimes obvious and great overuse of dubbing not just of Wood and Beymer but also (at times) co-stars Rita Moreno and Russ Tamblyn. The picture uneasily mixes stark realism with intense stylization, and at times the street toughs are about as realistic as Leo Gorcey and Huntz Hall.

Fortunately, all of this and then some is compensated by so many richly imaginative components - the incredible dancing, the gorgeous cinematography and editing, superb supporting performances and, of course, Leonard Bernstein's music and Stephen Sondheim's lyrics - that, this time anyway, it completely won me over by the end.

MGM's Blu-ray (released through Fox) has been quite unfairly raked over the coals. Instead of a smooth transition between the overture and main title an unintended fade-out/fade-in was foolishly added, and the transfer has been criticized for aliasing problems, especially at the beginning "God's-eye-view" shots looking straight down on Manhattan, which instead of gliding crawl like a millipede across a sand dune.

While there's really no excuse for these problems, which should have been caught early and corrected, the cup-half-full crowd of impossible to please technophiles have gone way overboard in response. Most of the time West Side Story looks and sounds great. The transfer is no disaster on the scale of Universal's HD DVD of Spartacus, Warner Bros.'s Hamlet, Paramount's My Fair Lady, or MGM/Fox's The Greatest Story Ever Told, to cite a few far worse examples. The Blu-ray of West Side Story looks terrific about 97% of the time, and even the 3% stupidly messed up won't be noticed by most viewers. It's not a deal-breaker.

The disc also sports a few new extras and recycles one of the best-ever making-of documentaries, "West Side Memories." 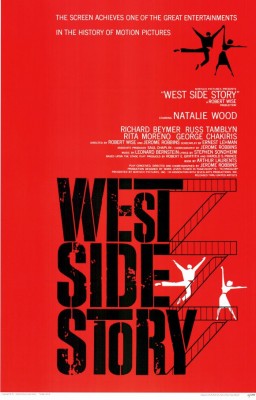 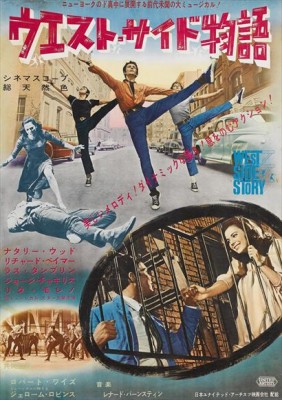 West Side's story of star-crossed lovers is Romeo and Juliet transposed to New York's West Side, the Montagues and the Capulets replaced by rival street gangs, the white American "Jets" and the Puerto Rican immigrant "Sharks." Challenged over some turf, the Jets' leader, Riff (Russ Tamblyn), recruits the gang's reformed co-founder, Tony (Richard Beymer), now working at Doc's (Ned Glass) drugstore, to represent them. On the other side of the chasm is the hotheaded but coolly handsome Sharks leader, Bernardo (George Chakiris), whose kid sister, Maria (Natalie Wood), falls instantly in love with Tony after they meet at a community dance.

The casting of non-Hispanics in the stage version didn't matter so much but in Super Panavision 70(mm) close-ups on big movie screens, and now on high-definition Blu-ray, Russian-immigrant Wood's brown-faced Maria and her highly variable accent (at its most extreme: "A-neeta! Yhuu most helup mee!") just isn't believable, especially since so many of her scenes are with real Puerto Rico native Rita Moreno, excellent as Bernardo's vivacious girlfriend. Other, worse choices were on UA's short list including, inevitably, Audrey Hepburn (yikes!), but an actual Latina who could sing, dance, and act apparently was never even considered. Add to that, Wood's singing was completely redubbed by an uncredited Marni Nixon. (The disc includes samples of Wood's original performances. She performs "I Feel Pretty" perfectly fine, but her "Tonight" approaches tone-deaf, Lucy Ricardo awfulness.) As with Nixon's subsequent looping of Audrey Hepburn in My Fair Lady, there's a complete disconnect between the person onscreen and the voice heard on the soundtrack. Beymer's overdubbing is somewhat better, but as is made clear in the "West Side Memories" documentary, Tamblyn's singing voice was perfectly fine, while the dubbing of Moreno on "A Boy Like That" is ruinous, completely at odds with the actress's original performance. But Wood clearly gives it her all and her performance is actually quite good.

Beymer is another story. The part is one-dimensional so it's not entirely his fault, but he can't sing either and is no more believable as a gang leader than Wood is as a Puerto Rican. He's too soft and puppy-eyed to be taken seriously as a street tough, and his character's interference in the name of True Love inadvertently leads to three tragic deaths. Beymer's casting is all the more unfortunate when one realizes the part almost went to Elvis Presley, who would have been absolutely ideal. It's one of those great Movie Roles That Might Have Been.

The IMDb entry on West Side Story labels this the "first feature film depicting street gang life," but that's hogwash. Movies like The Wild One (1953) and Blackboard Jungle (1955) preceded it, not to mention dozens of B-movies from AIP, Allied Artists and elsewhere, like Roger Corman's Teenage Doll (1957). While perhaps it's unfair to expect more realism in a movie where the Jets and Sharks move with a ballet dancer's grace, the dialogue, spoken in a kind of Bugs Bunny Flatbushese, may have been archaic even when it was new. Were they really using expressions like "Daddy-O" by 1961? Conversely, Ernest Lehman's screenplay seems to play up the racial intolerance aspects of the story to good effect. Particularly in 1961, Simon Oakland's openly and realistically racist cop was pretty shocking.

West Side Story was co-directed by Robert Wise and Jerome Robbins, initially with the intention that Broadway choreographer Robbins would do all the musical sequences and Wise everything else. However, Robbins was a real taskmaster and his unending pursuit of perfection soon put the film over budget and behind schedule. He was sacked after completing or nearly completing about half the numbers and Wise, guided by choreography already mapped out by Robbins, finished the picture alone.

While the dancing is all Robbins, even those sequences he didn't direct, Wise's stamp is on the film everywhere, beginning to end. The transition from the abstract Manhattan skyline (presumably designed by Saul Bass, who also did the artful end titles and the film's poster) to the aerial shots from above, to street level and, finally, the Jets and Sharks on the streets of New York, is flawless. This sequence, shot where Lincoln Center stands now, is the only major sequence actually filmed on location. The combination of gritty realism, ballet-like grace of the dancers, and moderately stylized decoration of the real crumbling neighborhood (the Big Brother-type campaign signs, the Modern Art-like graffiti) is mesmerizing. The soundstage exteriors seen later are often remarkable, but they just can't compete with the real thing. The early scenes especially were hugely influential, particularly on filmmakers like Jacques Demy (The Umbrellas of Cherbourg and The Young Girls of Rochefort, the latter co-starring Chakiris) and, as noted in the documentary, Michael Jackson's music videos. The later, more primary-colored, deliberately unreal studio sets are, as interviewee John Mauceri (a protégé of Bernstein's) rightly observes, proto-Bollywood.

Wise's use of rhythmic cutting and camera movement, the frequent and unusually high number of low camera angles, the use of color - all of it is striking and innovative throughout. Boris Leven's sets compliment all this, and though I wish more of the film had been shot on location, they're quite the achievement, particularly the under-the-highway set where the Jets and Sharks rumble, and the parking garage where the Jets try to "Cool" down.

And, ultimately, the picture is just so beautifully, handsomely, imaginatively done that it's easy to forgive its shortcomings. I've never been left sobbing in the theater after the house lights came up, as some of its staunchest fans describe in one of the documentaries, but it's easy to give in to its charms and it can be quite affecting.

Hard-core technophiles are up in arms about this title for reasons described above. I won't defend those indefensible mistakes, but will state that the transfer is miles ahead of all other home video versions and on big TVs its Super Panavision 70 cinematography (by Daniel J. Fapp) generally is on par with other Super Panavision/Todd-AO titles already out on Blu-ray: it's better than My Fair Lady, not as good as Grand Prix or 2001, but comparable to Chitty Chitty Bang Bang. The movie gets its own region A disc, pretty much, with a 2.20:1 aspect ratio and excellent 7.1 DTS-HD Master Audio, as well as a 4.0 Dolby Digital, Spanish 5.1 Dolby Digital, and French 5.1 DTS options, along with English, Spanish, and French subtitles. The original Overture and Intermission segues are included, if disrupted in the former case.

The disc with the film also includes a charming and highly informative song-specific audio commentary by Sondheim, as well as something called "Music Machine," which unfolds like a visual soundtrack album of songs by themselves. "Pow! The Dances of West Side Story" is a picture-in-picture option with dancers and choreographers commentating on the major dance sequences.

Many of these same faces also appear on Blu-ray Disc 2, in "A Place for Us: West Side Story's Legacy," a good companion piece to the earlier, nearly hour-long "West Side Memories," as stated above, one of the best and most refreshingly honest documentaries of this type, a show that doesn't shy away from acknowledging the picture's troubled production. Also on this disc is a storyboard-to-film comparison. Several trailers, most in high-def, are also included. One incorporates fascinating footage from various premieres, while another expands on Saul Bass's poster art and title designs. They are, however, out of sequence, with a reissue trailer shown first. A DVD version of this latest transfer is also included.

Despite some major glitches this new Blu-ray of West Side Story is still by far the best way to see it short of a pristine 70mm presentation. Despite its flaws the film gets better and better over time, even as its depiction of gang life becomes more and more dated. But the entire package comes together and works its magic; at least it did for me. Highly Recommended.