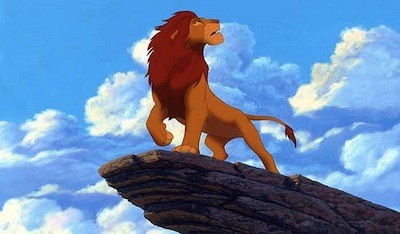 Let me tell you about the real Circle of Life, at least as it pertains to Walt Disney. It goes something like this: movie gets a first-run theatrical release, then a home video release, then it goes in the "vault" for a number of years, resurrected somewhere down the road when there is new technology and a new format or some other way to sell the material again. The consumer base doesn't exactly change, there are those of us who gobble it all up regardless, but then there are also those who have kids and create new customers, and Disney even knows how to feed parent and child different helpings of the same meal (think: Blu-Ray and DVD combos).

So it goes that 1994's The Lion King makes its return to theaters as a 3D event, though let's be real, it's essentially a long commercial for the forthcoming Blu-Ray. I think the home release will have a 3D version, too, but let's continue to be real, 3D sucks worse on your TV than it does in the Cineplex. If you're the type of Mickey Mouse consumer that digs on the third-dimension, then you're already queuing up for opening day.

Now, seeing The Lion King again is not in and of itself a bad thing. It's a very good thing. I watch it every couple of years; if I haven't done by the time another re-release comes around, that's usually a good kick to get me to revisit Simba and the pride. It's possibly the best traditional Disney film they've put out since the 1960s. The story of the young lion cub who is tricked into thinking he caused his father's death, and thus abdicating his throne to his evil uncle, is a classic tale of Shakespearian deception and redemption. It's smartly written, even moreso than I remembered. The character arcs are all impressive, with Simba going through real changes that extend beyond his getting bigger and changing voice actors (a young Jonathan Taylor Thomas is traded for Matthew Broderick). Simba really comes of age.

Likewise, the humor is funny and intelligent, at times even bordering on, dare we say, adult overtones. It's the same with the film's narrative themes. Directors Roger Allers and Rob Minkoff don't dumb the tale down to fit some kind of market research about what kids can handle: there is genuine peril in The Lion King, and that is part of the movie's message. Birth and death is all one cycle, that is what it means to be alive. After the film's overwrought musical opening--and if I have one complaint, it's that, seventeen years later, much of the music comes off as overly slick and perfunctory--the story does a hard cut to introduce Scar, the villain of the piece, voiced with a fey menace by Jeremy Irons. The very second scene of the film is Scar literally toying with a cute mouse he is preparing to eat. Which is the kind of cold-blooded nuance we should expect from a script about regicide and familial guilt, animated or otherwise.

The Lion King was animated with style and class, and even if the songs seem hackneyed now, the rest of the presentation does not. The Lion King is where the Disney studio learned to fully integrate digital effects without distracting from their tried-and-true drawing method. The action is fast and frenzied, benefiting from the wizardry computers make possible. At the same time, the producers and their artists don't skimp on the more traditional aspects. The funny characters--be they the straight-up comic relief (Timon and Pumbaa, as voiced by Nathan Lane and Ernie Sabella) or providing darker laughs (the hyenas, played by Whoopi Goldberg and Cheech Marin)--are elastic and vivacious. The environments they populate are also detailed and vibrant. I don't think there's any room for debate: The Lion King has always been gorgeous.

Until now, that is. I wouldn't say that 3D ruins The Lion King, but it is a superfluous addition. (Surprise, surprise.) In all fairness, the majority of the effects that are there aren't overdone, and at times, there are some beautiful separations of foreground and background; yet, in essence, there are so few of those moments whatever premium you are going to pay only buys you the opportunity to say "Oh, that looks neat" once or twice. Most of the film, you probably won't notice the 3D at all, meaning you're paying for nothing. At its worst, though, the 3D post-covernsion detracts from the overall experience. The general look of the image is darker than I recall, which is a big minus as far as I am concerned. In some of the more exciting action sequences, the post-production work is ill equipped to handle the speed of the animated characters. They end up being shaky and blurry, ruining the intended effect. It's a total waste.

And for that, I say avoid seeing this version of The Lion King in the theaters. Why bother? It's not the genuine article, and certainly not worth the added ticket cost. Instead, wait three weeks and get the Blu-Ray and watch The Lion King in high-definition. Judging by the trailers on other Disney Blu-Rays, it's going to look absolutely incredible. Blu-Ray is a format that is designed to handle intense colors and increase the clarity of detail, the exact opposite of what 3D post-conversion does and exactly the kind of presentation a movie like The Lion King requires. Plus, depending on the size of your family, what it will cost you to see Simba in the theater once will purchase unlimited access anyway. There is no bargain in this theatrical engagement.