Branded to Kill (The Criterion Collection)

The Criterion Collection // Unrated // December 13, 2011
List Price: $39.95 [Buy now and save at Amazon]
Review by Stuart Galbraith IV | posted January 10, 2012 | E-mail the Author
Straddling, irresistibly, the yakuza thriller and the Japanese New Wave, Branded to Kill (Koroshi no rakuin, 1967) is the epicenter of director Seijun Suzuki's wild and wooly universe, the controversial film from which he's built his reputation as one of the leading (as writer Chris D would put it) "outlaw masters" of Japanese cinema. A busy contract director-screenwriter at Nikkatsu Studios since the mid-1950s, where he had been making as many as six feature films per year, Suzuki shot Branded to Kill quickly (three weeks) and inexpensively (20 million yen, or about $55,000). Nikkatsu expected a made-to-order genre programmer but Suzuki delivered a stylistically audacious spoof-cum-art film whose story, particularly in its second-half, was completely bizarre when not incomprehensible.

The film was not a commercial success and Suzuki's beleaguered studio unhesitatingly fired him, overreaching in the process, but not without some justification. This became a cause célèbre among Japanese film fans and scholars, and Suzuki eventually settled a very public, three-year lawsuit with Nikkatsu that brought him some personal satisfaction but not much money and he was, for all intent and purposes, blacklisted. He didn't make another movie for ten years.

Eventually, however, his reputation and then some was restored, first in Japan and soon thereafter in the west. Indeed, in reappraising Suzuki the pendulum has completely swung in the opposite direction, broken off and crashed through an adjacent window. Today his films tend to be outrageously over-praised, partly because Western audiences aren't aware of similarly genre-transcending crime films made by other Japanese filmmakers, and partly because through the years Suzuki himself cleverly nurtured his iconoclast image in interviews and through his self-consciously arty and irreverent later works.

Criterion's Blu-ray is a massive improvement over their 4:3 LBX DVD from February 1999. Transferred from a fine-grain master positive, the disc is a stunner - far superior, in fact, to the theatrical print that accompanied the 1997 Suzuki retrospective where this critic first saw it. Extra features include new interviews with Suzuki, star Joe Shishido and assistant director Masami Kuzuu. 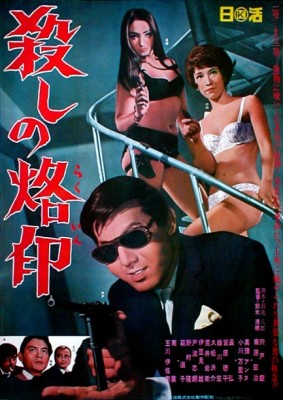 What plot there is concerns Goro Hanada (Shishido), a hit man ranked the Number Three Killer among the Japanese underworld. He's hired by Yakuza boss Michihiko Yabuhara (Isao Yamagawa) first to escort a client to Nagano and later to assassinate four other men, ostensibly something related to his diamond smuggling ring. There are many stylish shoot-outs in the first half, alternating with fairly explicit and amusing sex scenes between Hanada and his wife, Mami (Mariko Ogawa), a sex-starved vixen who spends most of the film naked. Hanada, however, is at least equally and certainly obsessively drawn to the smell of boiling Japanese rice, often but not always as an aphrodisiac.

Hanada dispatches the first three targets easily, in wild set pieces that clearly identify this as a spoof; in the last he makes his escape from a high-rise by leaping onto a rising hot air balloon. Allied with mysterious and exotically beautiful Misako (Japanese-Indonesian Annu Mari), Hanada attempts to assassinate a foreign diplomat (an unbilled Mike Daneen) but a butterfly lands on the barrel of his rifle, causing him to hit an innocent bystander instead, thus destroying his reputation.

Moreover, Hanada is now a liability in the eyes of his former employers, who put a contract out on him. Will the mysterious killer ranked Number One be his undoing?

Increasingly incoherent, partly a reflection of Hanada's growing paranoia (like Gene Hackman in Coppola's later The Conversation) but undeniably visually dazzling, Branded to Kill has enough imagination for five or six movies. One example: Hanada and Misako make love in an apartment positively overrun with thousands of dead butterflies, the creatures wall-to-wall, hanging from the ceiling and covering like a blanket the sofa where the hit man and his fatalistic lover try to make love.

The influence of the Japanese New Wave is obvious: Hanada's apartment, for instance, is closer to something you'd find in Double Suicide than the usual yakuza thriller. But it also reflects the general direction the genre was taking as box-office receipts plummeted in the late-1960s and the studios became increasingly desperate to pry their once loyal audiences away from their new TV sets. The audacious sex scenes in this may have been shockingly explicit for a studio film in 1967, but within a few years movies like Female Convict Scorpion: Jailhouse 41 (1972) and School of the Holy Beast (1974) would equal if not eclipse those found here.

Branded to Kill is certainly worthy of Criterion's loving attention, but I also find its stratospheric reputation symptomatic of long-held misassumptions about Japanese film (hopefully less an issue as technology shrinks our world) and its genre films especially. Specifically, Suzuki - and more power to him for succeeding so well - reinvented himself as a lone anarchist fighting an assembly-line studio system too small-minded to appreciate his talents. He took obvious delight baffling interviewers and Q&A audiences with bizarre, non sequitur answers to their reasonable questions.* In 1980 he made a big comeback with the Japanese-made but German-entitled Ziguenerweisen**, an unbearably pretentious work nonetheless perfectly-timed. Several influential Japanese critics championed it at least partly because it provided them with an excuse to completely shut out another director on the comeback trail, Akira Kurosawa, whose Kagemusha was released that same year.

More to the point, for most of the last three decades Suzuki's rise (along with a few others, notably director Kinji Fukasaku) has come at the expense of still-anonymous yet equally talented contemporaneous filmmakers: Nikkatsu's Yasuharu Hasebe and Toho's Jun Fukuda immediately come to mind. (Writer Stephen Bowie helpfully notes that Criterion has just added Fukuda's Golden Eyes, a.k.a. Goldeneye, to their Hulu streaming catalog) Even Kihachi Okamoto, famous in the west for his samurai films (e.g., The Sword of Doom), is virtually unknown outside of Japan for his much superior crime films. The best of these, The Age of Assassins (also known as Epoch of Murder Madness, 1967) was made at least a year prior to Branded to Kill (Toho withheld its release for many months). It skewers genre conventions in a similar fashion, with equal visual aplomb, and yet outside of a few retrospective screenings has never been properly released in the west. Further, interest in all things Suzuki - nearly everything he's ever made has been exhibited in the west, and more than a dozen of his titles are available on DVD - has arguably come at the expense of other frankly more important filmmakers still all but unknown outside Japan.

That's not Suzuki's fault, of course. But his pictures don't exist in a vacuum, either, and praise heaped on Suzuki must be weighed against under-appreciated contemporaries churning out not dissimilar work, though Branded to Kill unquestionably is an extreme example. The good news is that's there's more like it, waiting to find western world distribution. 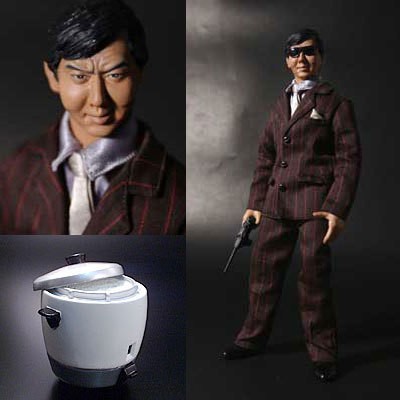 Photographed in stark black & white Nikkatsuscope, the studio's answer to CinemaScope, Branded to Kill is extremely crisp and clean with excellent blacks and very good contrast. Presented in its original 2.35:1 aspect ratio, the film is a joy on big, widescreen TVs. As with most Japanese films from this period, the use of the 'scope ratio is superb throughout. The uncompressed mono audio (Japanese only, with optional English subtitles) is likewise strong. My only complaint about this region "A" encoded disc is that I found the subtitles lacking, with signage, newspaper headlines, song lyrics and the like too often going unsubtitled. (Another label, AnimEigo, tends to go overboard in this regard. Can't we settle on a happy middle ground?)

Supplements, most in high-def, include new interviews with Suzuki, now in his late eighties, on oxygen and looking frail, and assistant director Masami Kuzuu. Suzuki also is featured in an earlier, 1997 interview, here much more robust and rascally. Also included is a highly amusing new interview with Joe Shishido (featuring as it does a genuinely startling moment that clearly caught the crew interviewing him off-guard); a subtitled but softer Japanese trailer; and a booklet featuring "Reducto ad absurdum: Seijun Suzuki's Branded to Kill," an essay by critic Tony Rayns.

A memorable movie-watching experience, Branded to Kill is a must-see, and despite Suzuki's over-inflated reputation in recent decades, it's deserving of Criterion's excellent transfer and worthwhile supplements. A DVD Talk Collector Series title.

* I once interviewed Suzuki in Los Angeles immediately after my friend and colleague Chris D had finished his interview. "How did it go?" I asked him as we passed one another in the lobby of Suzuki's hotel. Chris just sighed and shook his head in bewilderment. An hour later I felt the same way.

** Even harder to pronounce in Japanese - "Tsi-go-I-ne-ru-wa-i-zen" - I'm convinced Suzuki specifically chose the title because it was so difficult to say. He certainly delighted in my (and my interpreter's) mangled efforts to say it.