Fox // Unrated // December 13, 2011
List Price: $34.98 [Buy now and save at Amazon]
Review by Stuart Galbraith IV | posted January 9, 2012 | E-mail the Author
A Blu-ray release of Stars and Stripes Forever (1952), a biopic of composer/band leader John Philip Sousa (1854-1932), is welcome if somewhat baffling. Though popular when it was new, it would seem an awfully hard sell in 2012. Perhaps distributor Fox is betting consumers will confuse it with Warner Home Video's The Music Man (1962). Usually deep catalog titles like this are tied to a current theatrical release, a larger promotion, or maybe an annual holiday. I could see Stars and Stripes Forever getting released around the 4th of July, but - mid-January? Maybe someone at Fox is especially fond of the picture.

Or maybe they're just cleaning house. Apparently, it was never released to DVD at all, though there was a VHS version in 1993. The Blu-ray is packed with extra features prepared in 2008 but debuting only now.

Regardless, Stars and Stripes Forever is harmless fun, reasonably enjoyable but not really memorable, mainly because Sousa seems to have led a quiet, unmemorable life devoid of the kind of drama that makes interesting movies. The picture must have seemed awfully quaint and mild even in 1952, though the Blu-ray's featurettes make the case that Stars and Stripes Forever is one of the more accurate musical biopics, and therefore useful as historical drama. 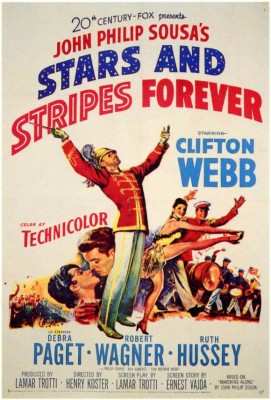 Adapted from Marching Along, Sousa's autobiography (and also the film's British title), Stars and Stripes Forever has little in the way of story. The movie is just 89 minutes long, unusual for a big, Technicolor A-list movie. As the film opens Sousa (Clifton Webb) is leader of the U.S. Marine Band when Willie Little, played by Robert Wagner early in his career and grinning ear-to-ear, talks his way into the band. He achieves this, partly, by impressing the bandleader with his new invention, the Sousaphone, a modified tuba (and in reality invented by J.W. Pepper and/or G.C. Conn, but no matter.)

Stars and Stripes Forever was part of a wave of similar musical biographies following the gargantuan success of Columbia's The Jolson Story (1946), one of the most successful films of that decade. For the next dozen or so years, movies were made about every major band leader, composer, songwriter, or iconic performer imaginable: Cole Porter, Jerome Kern, Tommy and Jimmy Dorsey, George Gershwin, Bert Kalmar and Harry Ruby, Enrico Caruso, Eddie Cantor, Glenn Miller - the list is endless. Many, like the practically fact-free if entertaining Jolson Story were outrageously fictionalized, while others struggled to find anything like interesting drama in their subjects, regardless of the great music they created.

That's largely the case with Stars and Stripes Forever. Webb, better known for the great noir Laura (1944) and the 1946 version of The Razor's Edge, gives an interesting performance as Sousa, his posture always perfect, his manners refined, reflecting a 19th century military breeding that stayed with him long after he retired from military service. Alas, there's not much beyond that slightly stuffy veneer. Usually films like this depict the aching struggle of the musician/band leader to find that extremely personal yet elusive "sound" (e.g., Jimmy Stewart's title character in The Glenn Miller Story), but in Stars and Stripes Forever audiences never get inside Sousa's head or emotions.

The film relies on clumsy narration (by Casey Adams/Max Showalter) to fill in some gaps, such as one scene pointing out members of Sousa's famous band: "[And there's] a youthful Arthur Pryor, trombonist, who a few years later would lead his own distinguished band." None of this leads anywhere, even when, at one point, the narrator turns his narration over to Sousa!

The others are trite genre stereotypes: the devoted, gentle wife who humanizes her sometimes-autocratic husband; Young Love, she a hellcat violently resisting his indefatigable advances. (It is, however, most amusing to see Scottish actor Finlay Currie turn up briefly as a southern gentleman talking and dressed exactly like Col. Sanders. Even near the end, when (minor) tragedy strikes, 'tis but a hiccup and all is set right before the fade-out.

Shot in three-strip Technicolor just prior to the wide screen revolution (led by Fox the following year), Stars and Stripes Forever is a handsome release sporting extremely rich hues, with color matrixes that not once go out of alignment. The image is impressively sharp throughout. I've been very disappointed with several classic Fox titles out of Blu-ray, Miracle on 34th Street (1947) for instance, but this one looks very nice indeed. The English DTS-HD Master Audio is up to the task; a Spanish mono track is also included, along with optional English SDH, French, and Spanish subtitles. The 50GB disc is region "A" encoded. As standard DVD of the film is also included.

Supplements include two self-explanatory featurettes, both in full frame standard definition: "From Our National March to the Silver Screen" and "John Philip Sousa's Contribution to American Music." Both feature authorities like Marc Wanamaker and Miles Kreuger, who appreciate the film more than I did. Also included, again in standard-def, are several trailers, including one with Webb out of character, and alternate main titles for the British release.

Nothing much happens in Stars and Stripes Forever but the marching music is good and the film is moderately entertaining. The Blu-ray release, meanwhile, gets high marks and as such is Recommended.