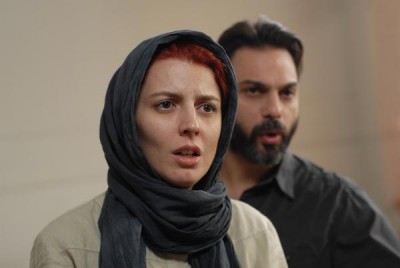 The opening scene of Asghar Farhadi's A Separation finds Simin (Leila Hatami) and her husband Nader (Peyman Moaadi) in front of a judge, asking for him to grant their divorce. The setting is present-day Iran. Simin wants badly to leave the country with her husband and their daughter Termeh (Sarina Farhadi), but Nader refuses--he must stay to tend to his father, who has Alzheimer's. She does not want to stay, not only for herself, but for her daughter: "I'd rather she didn't grow up under these circumstances." ("What circumstances?" the judge demands suspiciously.) The lengthy and difficult dialogue scene is played in one unbroken take, directly into the camera, which is subjectively placed in the position of the third person in the room--the camera as "judge." But what is so fascinating about A Separation is that, for the rest of the film, Farhadi refuses to allow his camera to judge his characters. It just observes, and sees every character with empathy.

From that scene and the title, we expect the film to tell the story of an Iranian woman discovering her independence, or some such well-trodden soil. Instead, the picture goes in an entirely different direction. As she moves out, Nader is hiring a nurse/housekeeper to, basically, take over her place in his home: taking care of his father, cleaning his apartment, so on. The woman he hires, Razieh (Sareh Bayat), discovers quickly that she can't do the job--Nader's father soils himself on her first day (she makes a frantic phone call: "If I change him, is it a sin?"), and the work is heavy and burdensome because she is pregnant. She tries to have her husband Hodjat (Shahab Hosseini) take over the job, but he keeps getting sent to jail by his creditors, so she continues to show up, doubly out of a sense of responsibility and to keep her meager salary coming in.

And then something happens. To even describe the turn of events would be too perilous to attempt, as the remainder of the film is basically about who did what, and when, and to whom, and what they knew, and what they now say about it. The quiet, keenly observed situations of the film's first act become dizzyingly complex, not only by the escalating language and emotions, but by the clear and fair way that Farhadi approaches all of his characters. We feel, in shifting but equal measure, both anger towards and sympathy for everyone involved; we've been drawn in so close by the style (which is intimate without being self-conscious) that the anxiety of the people onscreen becomes our own.

The film is ultimately about how elusive the truth is--not a new topic, to be certain, but one that remains rich with possibility. And it is about how frustrating the fruitless reach for truth can be, how an overheard conversation here or a momentary loss of control there can utterly transform everything in one's life. No conflict is simple (a broader social context is hinted at, with lines like "We're humans, just like you," but thankfully is not hammered), and life seldom gives us clear heroes and villains. We understand everyone in the picture. We're also utterly maddened by them, by their stubbornness and pride and obstinacy, even when they are trying in every moment do do what's right--not just in the world's eyes, but in their own.

But perhaps the most masterful element of A Separation is how Farhadi (who also wrote the screenplay) manages to delicately yet powerfully thread the narrative, circling his story back to Simin and Nader: to their complaints, to their resentments, to their differences that should be surmountable, but somehow aren't. Contrary to our second impression, the film actually is about their separation--and several others, as well.