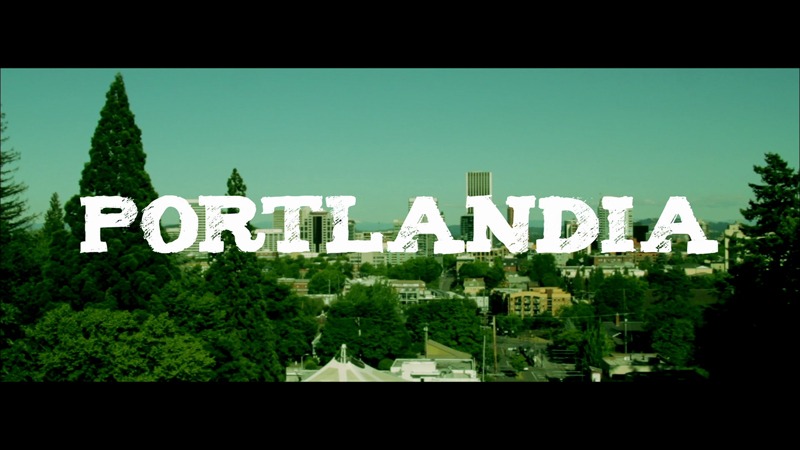 
The Show
Somehow, on a staff where approximately 98% of the writers either live in, have lived in or have at least visited the City of Roses, Mr. Long Island Living got the opportunity to review the first season of Portlandia, a comedic paen to PDX from SNL's Fred Armisen and Sleater-Kinney guitarist Carrie Brownstein. Fortunately, an intimate knowledge of Portland's idiosyncrasies is not required to enjoy the show (though one gets the feeling from watching that it wouldn't hurt to know your way around.) To get into Portlandia, one only needs to be able to appreciate quirky characters living in a granola-friendly world, as the series establishes the rules of the game effectively.

It's almost misleading to call this a sketch series, as you won't find segments built solely on oddball characters or outlandish situations, like you will in most sketch shows. These sketches are more like momentary slices out of the lives of some rather unique residents of Portland, with three portions of each episode spent with one pair of the city's citizens, getting to know them better. It's solid storytelling in a slightly off-kilter dimension, and the result is true laughs that are earned honestly. There are no easy laughs from catchphrases, even if there are repeated characters, and there are no parodies, even if some of the concepts are familiar. It's all just a day in the life, and a very funny one at that. 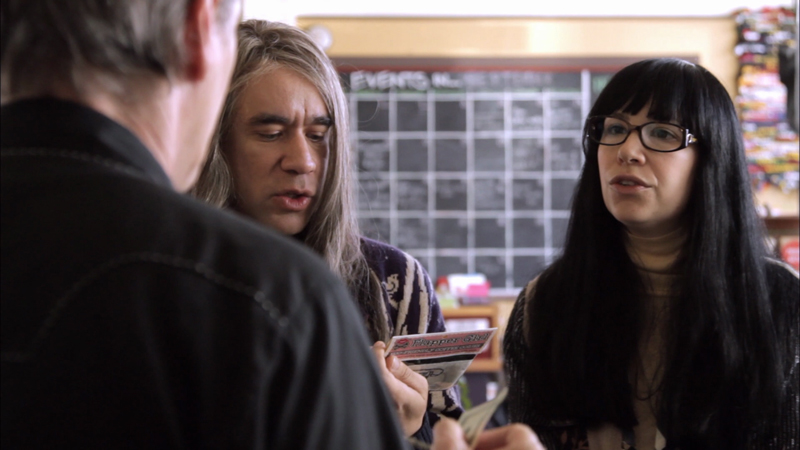 Armisen's work on SNL makes him a known quantity, as his honed blend of intense energy and too-cool-for-school attitude allows him to portray a wide range of characters to fine effect, but Brownstein is better known as a musician than an actor (with a small group of roles under her belt in the past decade.) However in these six episodes, she shows herself to be a fine comedic actress, often getting more laughs than her more established collaborator, whether she's playing an uptight wife, a veteran stripper or a sexually-frustrated guy. The duo have terrific chemistry, which gives their characters tremendous realism for a show that's peppered with touches of surrealism. The guest stars are also quite impressive and slot in with ease, be it Jason Sudekis, Aimee Mann or Selma Blair, among others.

Though there are several characters who make repeat appearances, like Armisen's individualistic cyclist, the feminist bookstore owners (whose store opens up the opportunity for guests like Steve Buscemi, Aubrey Plaza and Heather Graham to pop in), Kyle McLachlan's cartoonish mayor or just the characters of Fred and Carrie, they don't outlast their welcome, as they are managed well over the course of the season. Their Japanese tourists, though amusing, would easily start to wear with a return though, as would the publicity-seeking chefs and their ridiculous photo shoot. However, it would be easy to see where some of the cast could become regulars, because their appeal isn't limited to a particular setting, like the couple who micromanages their housesitter or the children's game-playing crew, Sherlock Homies.

Though there are highlights in every episode, be it the now series trademark design spoof "Put a Bird on it," the brilliant "Did You Read That Thing?," which pokes fun at the hyper-literate or the hilarious Portland jobs commercial, episode five, "Blunderbuss," may be the best of the bunch, as Portland gives itself over to the titular film and music festival. Part of it is probably the intimacy Armisen and Brownstein have with the topic, but it just feels so on-point, from the struggles of wannabe indie act Sparkle Pony (Jenny Conlee of the Decemberists) to the fandom on tap at hipster hotel Duece, to the awkward Gus Van Sant-hosted film festival and the note-perfect "Finding Mr. Write." Unfortunately not everything is as good as that one, as the final episode and its baseball storyline just didn't excite like the others did, though it did have some laughs, including the profile of Wilson's artisinal lightbulbs, with ill apprentice D'arbie and Nick Kroll as a dim customer.

One of the things that might get overlooked, but really adds to this series is the editing, which is intrinsic to the show's comedic energy. Frequently the bits move at a machine-gun pace, getting laughs from the frenzy they build, and without the laser precision of the editing by Daniel Gray Longino and Doug Lussenhop, it just wouldn't fly. Unsurprisingly, they, like writer/producer/director Jonathan Krisel, hail from the Tim and Eric universe, which explains the manic feel the show occasionally takes on, not to mention the show's out-there creativity. 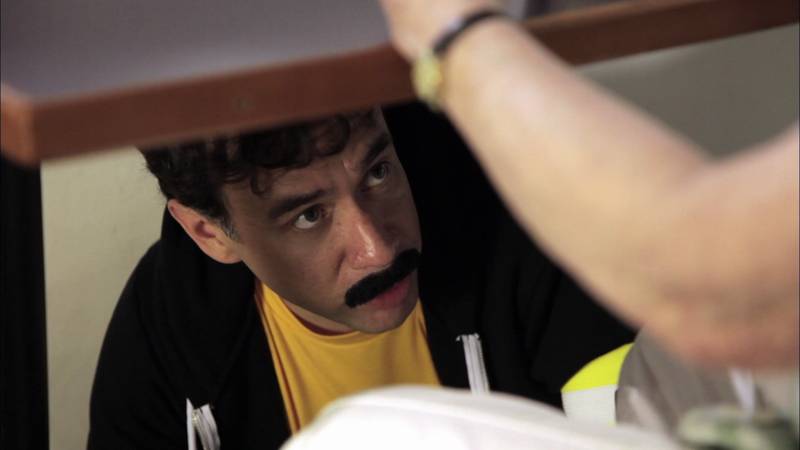 The Disc
The six episodes in Portlandia's first season arrive on one disc (one Blu-Ray version, one DVD) which are in a Blu-Ray-case-sized cardboard folder covered with a map and Portlandia characters, held in a cardboard slipcover (an homage to the area's indie-label CD releases.) The disc feature an animated widescreen main menu offering a play-all option, episode selections and the opportunity to check out the extras. There are no audio options nor are there subtitles or closed captioning. What there is though, is a cute little bonus in the packaging, so make sure you look for it.

The Quality
The 1080p AVC-encoded 1.78:1 transfers are quite nice, especially for such a low-budget show, as the colors are appropriate for the settings, only popping when it comes to artificial shades, like those on clothes, and the level of detail is high, but not as impressive as other Blu-Rays, as there's some evident softness. Black levels aren't as deep as one would like, but again, this is a low-budget show shot on hi-def video, and some concessions will be made. The only thing you can ask is why is this on Blu-Ray if it's a lo-fi presentation?

It's almost shocking at this point to come across a Dolby Digital 2.0 soundtrack on a Blu-Ray disc, but that's what you get here, and it's honestly all you need considering the show is mainly dialogue-driven, though the music probably could have gotten a boost from a surround mix. As it is, it's a straight-ahead center-focused mix offering little outside of clear. distortion-free dialogue and some decently strong music tracks.

The Extras
The extras start with audio commentaries for all six episodes from Armisen, Brownstein and Krisel. Don't expect a laugh-fest from these funny people though, as they tend to stick to the details of the production, sharing lots of making-of info and thoughts about the characters and storylines. There are a few on-set stories, mostly about how much they loved the people they worked with, but it's more of an informative affair than an entertaining one. That said, they aren't hard to listen to either.

Several of the extras are made up of cut footage, starting with a nearly five-minute blooper reel. Surprisingly, the breaks are spread around, with everyone responsible for ruining takes, even if Brownstein seems a bit more susceptible to them. After watching this though, one wonders how Aubrey Plaza gets through a scene on Parks and Recreation. A pair of extended scenes (2:26) and seven deleted scenes (16 minutes) follow, though there's not a lot here that's worth the time. The two extended scenes can be skipped without worry, while the deleted scenes include two segments that are completely different from what's in the show. The ambulance drivers sketch is amusing, though the ending is telegraphed from a mile away, while the Forrest Meeting is pretty good, and would fit right in with the series.

A pair of standard-definition Thunderant sketches, the online precursor to Portlandia, show how fully-formed the concept was from the start, while one of them, "One Man Show," may be the inspiration for a recent SNL sketch by Armisen. Then there's "Fred Armisen Speaks to Oregon Episcopal School Graduates" (11:41), which sees him deliver a commencement speech to students of a private prep school in Portland. He's got the bit down cold, and makes you wish he delivered your graduation speech.

The extras wrap up with a preview of Portlandia's second season, which looks damn good, with a host of fun special guests. 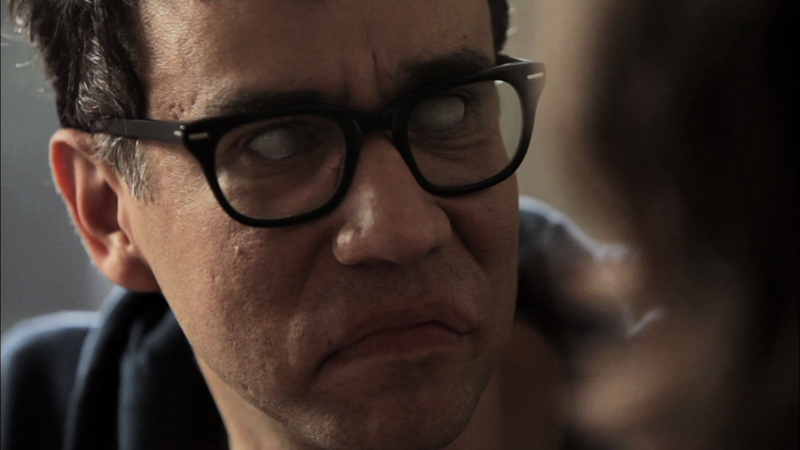 The Bottom Line
There were no expectations coming into this series, outside of the known quantity of Armisen's sketch comedy ability, so the fun was a pleasant surprise, especially when it came to the quality of Brownstein's performance. The Blu-Ray presentation is solid all-around, but unspectacular and there's a decent assortment of extras to fill in for the relatively short season. If you enjoy the more story-based sketches from The Kids in the Hall, this could definitely be up your alley.