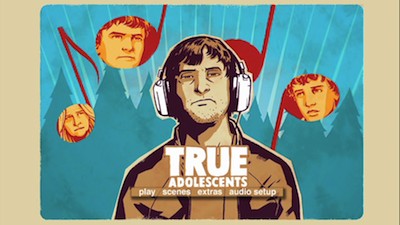 There is a kind of magic that occurs when a storyteller takes a well-worn idea and makes it seem new and insightful. It's a bit like taking a pair of old shoes into a cobbler, half-expecting to hear they are beyond repair, only to have the craftsman fix them up enough so you can walk many more miles on those familiar soles.

The metaphor is a bit of a stretch, but since there is some question of what is and isn't appropriate footwear in the indie film True Adolescents, I'm going to let it stick. Written and directed by first-time filmmaker Craig Johnson, it's an unassuming light drama that surprises with its humor and uncluttered honesty. On paper, it's got a none-too-promising slugline: mid-30s rocker on his last legs takes his fourteen-year-old nephew and the boy's friend on a camping trip, gets everyone lost, and has to pull things back together to get home. Yet, when you consider that a narrative outline is merely the frame on which the good details hang, it should be no surprise that there is plenty here waiting to be discovered.

Mark Duplass (Greenberg, TV's The League) stars in True Adolescents as Sam, the lead singer of a band called the Effort. It's a great name for a rock group, I can't believe no one has used it; also, terribly ironic given Sam's general life problem: he puts in the effort, but only just enough. This lacking is catching up with him, and he finds himself jobless and homeless and running out of other people's couches to crash on. He turns to his favorite aunt (Melissa Leo, Welcome to the Rileys, The Fighter), who tries some tough love but is better at the love than being tough. She encourages Sam to get a job, but she doesn't push him too hard. Likewise, she is easygoing when her son Oliver (Brett Loehr) gets in trouble at school. This is her pattern. She let her ex-husband walk all over her, too.

Therefore, it surprises no one when Oliver's father cancels their camping trip at the last minute. Sam reluctantly takes over, driving him and his best school pal Jake (Carr Thompson) to a remote beach. Sam annoys the living crap out of the guys, constantly ribbing them and even getting in their way when they try to make with some girls at the hotel. He is an overgrown kid, a motormouth who likes to pretend he has all the answers, but is just faking it. In the late '70s, Bill Murray might have played the role, but his version of Sam would have really had the whole thing wired. Duplass' version is heading for a mid-life crisis at the age of 34. 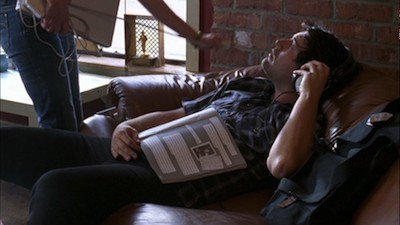 The script for True Adolescents is very good. It's funny and has its heart in the right places, and it has a couple of twists that are believable unto themselves but also made convincing by the very real responses the characters have to them. It's not a movie that has all the answers in place by the end; quite the contrary, in fact. The final shot of Sam looking in a mirror is devastating. Yet, there are enough emotional band aids moved into place that the viewer can feel content that he or she has seen a true dramatic arc, and what is left dangling feels right. To have sewn it up even more would have rang false. Duplass really sells that final shot. You feel for the guy. All the pain and confusion and sadness is right there on his face, and in those moments, you appreciate his performance all the more, because you realize all of these things were there the whole time.

True Adolescents wouldn't be the same without Mark Duplass. The core cast is fine. Melissa Leo could have done her part in her sleep, and the teenage boys are the right mix of awkward jerkishness to be convincing. It's Duplass, though, that brings the fuel. He is funny and charismatic enough to make what could have been yet another dead-end slacker into a truly memorable human being. I wasn't kidding about the Bill Murray comparison. There has been talk of remaking Meatballs with Kevin James. If you have to remake that movie (FYI, you don't), then fire that guy and hire Mark Duplass.

For all its gags, True Adolescents has a pleasing naturalism. The grainy 16mm photography by Kathryn Westergaard lands somewhere between 1970s verité and faux-documentary, moving on the ground with the actors but avoiding the awful shakey cam that is popular among many young filmmakers (including Mark Duplass and his brother; this style really hurt their last feature, Cyrus). Johnson shows as steady a hand with putting the final product together as he did when writing it. Every choice shows a lot of thought, even if it doesn't all work (the hippies really push the so-called comedy over the credibility line). True Adolescents isn't so profound it will change the way you think about yourself, but it will make you think about its characters long enough to be glad you decided to go on this trip with them. 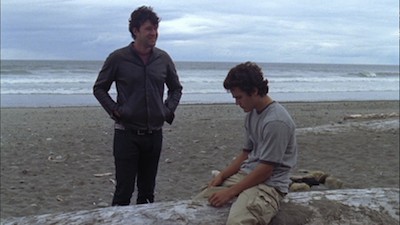 Video:
The video transfer on the True Adolescents disc is widescreen, with natural looking colors and a surface texture preserving the original cinematography. Blacks are good, there is never a very heavy dark scene, but the night sequences are appropriately dark and the intended detail shows through. The digital resolution is right on, I saw no combing or blocking.

Sound:
There is both a regular stereo mix and a 5.1 surround mix. I didn't notice anything too dynamic in the multi-track. I would have expected a little more ambient noise in the woods, something to give the full effect of being in the forest. Dialogue came through clear, but honestly, I found the 2.0 to be more forceful. It's a case where less works far more.

Extras:
First, a note about the packaging, and a little disclosure. I pulled this disc out of the pile because it has an awesome cover image by comics artist Cliff Chiang, of whom I am a big fan. It also turns out that the film was edited by his wife, Jennifer Lee, a friend of mine from the days when she was editing comic books and not films. This will likely only mean anything to you if you are a comics fan (Cliff is currently drawing Wonder Woman), but damn, it is a nice cover.

True Adolescents has two commentary tracks, and I wish some judicious editor had squished them together, finding the best parts of both and making one solid audio commentary. The first one features the aforementioned Johnson and Lee alongside producer Thomas Woodrow, and while they do share some nice information about the production, it tends to lag. Likewise, Mark Duplass' solo commentary does light up when the actor has something to say, but sometimes he seems to get a little lonely and the monologue runs out.

Video extras include an 18-minute making of and eleven deleted scenes, which can be played all at once or chosen separately, and with or without commentary. Most are about a minute long and are inconsequential trims. The slightly longer ending shows the filmmakers made the right choice to cut the last twenty seconds or so off of the scene, it wouldn't have had the same impact.

FINAL THOUGHTS:
True Adolescents is a bit of a surprise: a small-budget movie about a guy in his 30s with no prospects hanging out with teenagers who think he's a loser that actually finds some original comedy and some real heart in the all-too-familiar scenario. First-time writer/director Craig Johnson does some good work breathing life into a tired formula, but the film really belongs to Mark Duplass, who turns in a winning comedic performance as the slacker in question. Recommended. 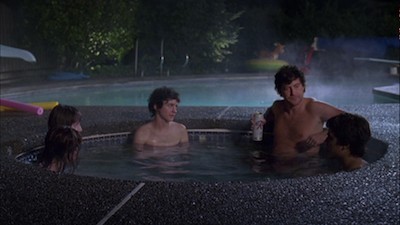