Master of the World

MGM Limited Edition Collection // Unrated // August 23, 2011
List Price: $19.95 [Buy now and save at Amazon]
Review by Stuart Galbraith IV | posted October 8, 2011 | E-mail the Author
American International Pictures' film of Jules Verne's Master of the World (1961) is an odd one in myriad ways. It was an attempt by AIP - co-founder James H. Nicholson specifically, as partner Samuel Z. Arkoff wasn't too keen on the idea - to make something a little classier than their usual low-budget drive-in fare. At various times the company coveted respectability. Many forget, for instance, that around this time AIP distributed Fellini's La Dolce Vita. Master of the World emulates earlier Jules Verne blockbusters more than Verne's novels: Walt Disney's 20,000 Leagues Under the Sea (1954) and Mike Todd's Around the World in 80 Days (1956) particularly, both of which were referenced in this film's advertising.

AIP's movie was not a success, however. Indeed, it was an unmitigated disaster. In the decades since, genre fans almost unilaterally have forgiven the picture's innumerable shortcomings and embraced its few attributes. Partly for that reason every eight or nine years I give it another chance but my reaction is always the same: it stinks. With the exception of Charles Bronson's surprisingly effective hero, an unusual role for the actor at this time, everything about the movie is at best mediocre. The script is talky and confused, the production design is ugly, the direction sluggish, the comedy relief is misplaced, some of the acting is distractingly hammy, the film looks cheap throughout and the special effects are truly terrible, even at this budget level.

And it still stinks despite MGM's extremely good DVD-R, which is 16:9 enhanced and in full stereo, a pleasant surprise. Part of MGM's "Limited Edition Collection" of DVD-Rs, manufactured-on-demand discs, Master of the World looks better than ever, though this sharper and brighter video transfer has the downside of accentuating the movie's flaws. 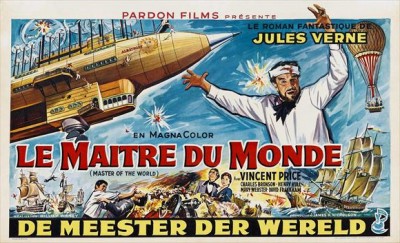 As with Around the World in 80 Days, Master of the World begins with a prologue tracing the evolution of flight, hauling out familiar, ancient footage of wacky, impractical would-be aircraft reaching for the stars but crashing spectacularly on the tarmac instead. The movie is set in 1848, where in Pennsylvania, Department of the Interior agent John Strock (Bronson) hires a balloon belonging to millionaire munitions maker Prudent (Henry Hull, very hammy). Joined by Prudent's daughter, Dorothy (Mary Webster), and her fiancé, Philip Evans (David Frankham), Strock investigates the strange, booming voice emanating from a nearby mountain, which seems on the verge of eruption, or something. The cause of all this is mad inventor Robur (Vincent Price) and his heavier-than-air rigid airship, the Albatross. (However, why Robur takes to bellowing scripture in the direction of a small Pennsylvania town, and why his voice causes earthquakes, is left unexplained and soon forgotten.) Robur shoots down the balloon and takes its riders prisoner.

Robur, a cockeyed pacifist, is ready to destroy the world in order to save it. Dropping bombs from his airship, he intends to bring peace throughout the world by eliminating all instruments of war. Strock admires Robur's ambitions but not his means and quietly sets out to destroy the airship even as Evans, with a big, dramatically unjustified chip on his shoulder throughout the narrative, accuses Strock of cowardice.

Though it aspires to the heights of 20,000 Leagues Under the Sea and Around the World in 80 Days, the results much more closely resemble the works of schlockmeister producer Irwin Allen, with Master of the World quite like Allen's Five Weeks in a Balloon (also suggested by Verne, and released in 1962) and with the same uncaring use of stock footage as Allen's later TV series The Time Tunnel (1966-67). While Five Weeks in a Balloon is just as bad, it is slightly more entertaining than this.

Master of the World is just too ambitious for its budget. The interior sets of the Albatross (at best) look like something you'd see on series television. They completely lack the imagination of, say, Harper Goff's elegant and convincingly period designs for Disney's film, for which no expense was spared. (20,000 Leagues cost $5-6 million, while Master of the World probably cost well under $800,000. It was shot in just 15 days.) At one point Robur explains that his flying ship is composed mainly of lightweight pressed paper, an ironic statement considering that the sets really do look like they're made out of cardboard and chicken wire.

The over-reliance on stock footage is depressing and vaporizes any suspension of disbelief. It's just not believable on any level watching Vincent Price drop plastic-looking prop bombs on stock footage from old movies. When the Albatross flies over London, it's stock footage of the opening shots from Laurence Olivier's Henry V (1944). The problem is that film's impressive miniature set is of London circa 1599, complete with thatched-roof houses and 16th century sailing ships on the Thames. (What's a few hundred years?) Conversely, in a photograph of the Champs-Élysées, over which an explosion is haphazardly matted, modern automobiles are visible. A stock shot of Washington D.C. shows the Capitol Dome 15 years before it was completed. Some of the stock scenes are even in black and white, though there's a feeble attempt to hand-color a few frames here and there.

Vincent Price, given bushy eyebrows and a fuller beard than usual, has no character to play. He's basically Captain Nemo, but that inventor's brooding nature was offset by his unabashed fascination with the limitless undersea world, which in Disney's film is successfully passed on to the audience. In the novel but not the film Nemo's anti-imperialism is rooted in his resentment toward the British Empire's conquest of India (Nemo being an Indian prince) and the death of his family. Robur, on the other hand, proudly gives the requisite tour of his fantastic airship but otherwise remains enigmatic. He's little more than a surly bus driver.

The badly structured script gets the cast aboard the Albatross very early on, by the 15-minute mark*, then spends the remaining hour and twenty-five minutes trying to get them off. Richard Matheson's uncharacteristically poor script is extremely talky and artificial. Everyone makes speeches and Frankham's character is inexplicably hostile toward Bronson's for no clear reason, except to provide some additional if wholly artificial conflict.

Oddly, one of Matheson's biggest complaints about the film was Bronson, whom he felt was miscast. It's odd to see Bronson play a conventional hero, at this point in his career certainly, though he did star in Man with a Camera not long before Master of the World went into production. However, his low-key, sincere performance almost sells the story; he nearly makes the cheesy surroundings and tiresome plot points believable, though the odds are stacked too much against him.

Apologists for the film point to the ungainly yet strangely elegant design of the Albatross, but even it looks infinitely more attractive in the posters than in the movie, where most of the time it's hung rigidly in front of a process screen. In better hands it might well have been memorable like Disney's Nautilus but the special effects, credited to Tim Baar, Wah Chang, Gene Warren, Ray Mercer, along with Pat Dinga and an uncredited Jim Danforth, are inexcusably terrible. While intricate and detailed, the miniature of the Albatross is shot with consistently bad lighting and from terrible angles.

Director William Witney had a long career that included dozens of Republic serials, including one of the all-time best, Adventures of Captain Marvel (1941). Those chapter-plays of 20 years before had even lower budgets yet their special effects are far better than anything in Master of the World. Writer Bill Warren and others make the convincing case that Witney was great at shooting outdoor action set pieces but deadly dull and unimaginative when shooting interiors. Eighty percent of Master of the World takes place inside the Albatross.

Virtually nothing about the film works or makes any sense. Italian-American character actor Vito Scotti, often hilarious in the right role (in his several appearances on Columbo, Peter Falk visibly struggles to keep a straight face around Scotti), here plays a comical French chef. The role is beyond even the versatile Scotti, who most of the time adopts an Italian accent regardless. (Spoilers) So wrong-headed is the film that his broadly comic character is essentially allowed to commit suicide along with the rest of Robur's loyal crew. Similarly, the film's score, by AIP favorite Les Baxter, is widely inapt at times, as if completely disregarding the action it's supposed to be supporting on screen.

Presented in true 1.85:1 (not 1.78:1) and 16:9 enhanced widescreen, Master of the World certainly looks nice, with the bright primary colors vibrant and clear, and the full stereo audio (were there four-track magnetic stereo prints in 1961?) enhancing the overall viewing experience.** The region 1 DVD-R has no subtitles or alternate audio, but does include a revealing (and 16:9 enhanced) trailer, complete with text and narration, tossed in as a worthwhile Extra Feature.

Master of the World was a failed experiment. AIP made nothing like it before or after and just as a garish anomaly deserves to be seen once. It's not good at all save for Charles Bronson's good performance in an early and offbeat starring role. Conversely, MGM's transfer is excellent so, for those with an interest, Master of the World comes Recommended.

* Gary Teetzel writes, "Matheson's first draft screenplay included a sequence where some of the men from the Pennsylvania town (including our 'hero,' Phillip) climb the mountain to investigate the strange sounds and voices. If I recall correctly, their guide is a foreigner. He reaches the summit first, peers into the crater and recoils in horror from having seen 'a demon.' (Actually just Robur in some sort of protective suit, I believe.) So originally the opening was longer before getting to the Albatross. The first draft also had a scene in which the Albatross lowers nets into the ocean to catch fish but accidentally snags a whale that threatens to drag them down. One can only imagine Project Unlimited trying to pull that off on an AIP budget!"

** Greg Shoemaker, publisher of the late, lamented Japanese Fantasy Film Journal, adds, "The laserdisc release of the film featured exit music, a brief instrumental suite followed by a song, 'Master of the World,' referenced in the opening credits, but the DVD-R does not include either. These sort of mistakes occur in other DVD releases as well. For example, Fox's Chandu the Magician does not have its exit music, while the Sinister Cinema(!) release, featuring source material of lesser quality, does. Exit music from Guys and Dolls, featured on the laserdisc, does not appear on the many, many DVD releases of the movie. Sigh .... I would like to add that I too have tried to like this movie over the years, but it does suck, or 'stink,' as you politely state. And while Baxter's melodious score sounds better on the Archive disc than on the laserdisc, the inappropriateness of the cues to the on-screen action really struck me this time out. It's as though AIP wanted to make an adventure/comedy of the Robur tales in the style/tone of Todd's Around the World in 80 Days, when in fact the studio lensed a dark drama with sf trappings! Along these lines, I also noted that the score reminds me of Victor Young's, in which phrases of various European nations' anthems/patriotic melodies are interspersed with Baxter's original score, and that the motif for the chef 'sounds' very similar to Passpartout's. It's is as though Nicholson requested a score styled like Young's in the hope of achieving large box office success, even though the films were dissimilar in genre! This reminds me of Edward R. Small's plan to replicate the success of 7th Voyage of Sinbad by using [its] male lead ... that movie's animation cycles, etc. for his tepid Jack the Giant Killer. It didn't work there either." Thanks, Greg!