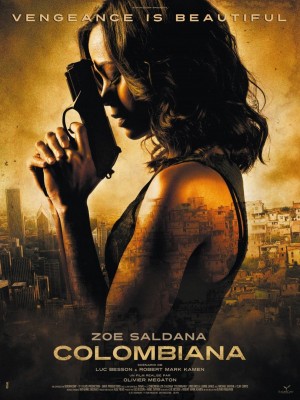 Luc Besson may have written and produced Colombiana, but the film is certainly no Léon. This Olivier Megaton-directed actioner is about as generic as they come, despite Zoe Saldana in the lead role. Colombiana, which follows a female assassin avenging the murders of her parents, is full of nameless henchmen, poorly staged action and snooze-worthy performances. Those hoping French filmmaker Besson had finally written a Léon follow-up will be disappointed by the limp, formulaic Colombiana.

Young Cataleya Restrepo (Amandla Stenberg/Saldana) watches as a Colombian drug lord kills her parents over an unpaid debt. Cataleya then goes to America to live with her uncle Emilio (Cliff Curtis), to whom she voices her intent to become an assassin. Emilio promises to honor her wishes, but first makes her get an education. Fifteen years later, Cataleya is a beautiful, deadly assassin who travels the world to take out her targets. Her number #1 priority? To kill drug lord Marco (Jordi Mollà) and his associates and avenge the deaths of her parents.

Director Megaton (Transporter 3) has a perfect name for an action filmmaker and can shoot a slick, good-looking movie. It is too bad Colombiana is content to be so mediocre. From the early frames it is clear that the film cares little about character development or suspense. The whole murdered parents/angry offspring angle has been done time and time again, and Colombiana is too lazy to even attempt to take a new swing at it. Drug lord Marco is a one-dimensional, machine-gun toting livewire who apparently has enough money to employ dozens of nearly identical employees to do his dirty work. These disposable villains are not particularly menacing, and Colombiana never convinced me that its heroine was in any real danger.

Saldana is a beautiful women and a fine actress, but Colombiana is below her talents. While Saldana has the moves to seduce and shimmy her way into tight situations, I was never sold on her ass-kicking abilities. Cataleya throws a mean punch, but each hit she lands threatens to snap her skinny arm in half. The best scenes in Colombiana come when Cataleya fakes a DWI wreck in order to get locked up near one of her targets. Such a move shows what Colombiana might have been had it followed through with its promise that Cataleya would be smarter than her competition.

All logic goes out the window as the film rolls forward and an FBI agent (Lennie James) starts tracking Cataleya, who has apparently killed over twenty people. When he finds out there might be a connection between Marco and the CIA, he goes out on a limb to help Cataleya. This whole scenario is fairly stupid, but it's right at home in a film where uncle Emilio shoots up a car directly outside a school and then calmly walks away. To make matters worse, the PG-13 constrained action is about as exciting as daytime cable. Nothing that happens in Colombiana really matters, and neither does the film.

At least the 2.35:1/1080p/AVC-encoded transfer is impressive. Detail is incredible in this deep, textured image. The film is gritty, high-contrast and colorful, and the Blu-ray expertly replicates director Megaton's intended look. Sharpness is perfect, black levels are rock solid and colors never bleed. Every fleck of dirt, splash of blood or flying fist is visible in the crystal-clear image, and backgrounds stretch for miles. There are absolutely no issues with noise reduction, aliasing or compression artifacts, and Colombiana gets another rock-solid transfer from Sony.

Colombiana comes in a standard Blu-ray case that is wrapped in a slipcover. You wouldn't know it from reading the back of the box, but the Blu-ray includes a number of extras: The Making of Colombiana (25:12/HD) features interviews and behind-the-scenes footage in which the director details working in several countries. Cataleya's Journey (9:33/HD) focuses on the two actresses that play the lead character, while Assassins (11:54/HD) focuses mainly on Saldana and her preparations for the role. Training a Killer (6:03/HD) is about Cataleya's fighting style, and Take the Ride (7:46/HD) follows the filmmakers on their globetrotting shoot. Sony also includes a BD-Live Portal and an UltraViolet Digital Copy of the film.

Move along; nothing to see here. Colombiana is far from the best work of writer/producer Luc Besson, and fans looking for a Léon sequel will not find it in Colombiana. Zoe Saldana commands attention as an assassin avenging her family's deaths, but Director Olivier Megaton's film is little more than a B-grade actioner with faceless villains and uninteresting fights. Sony's Blu-ray is impressive, but the film is a bore. Skip It.