Outrage: Way of the Yakuza


Please Note: The images used here are from promotional materials and are not taken from the Blu-Ray edition under review. 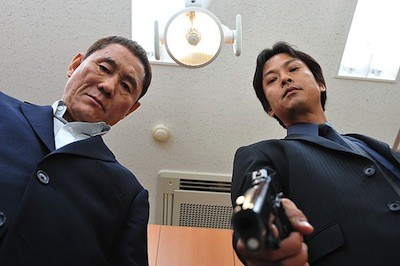 Imagine a version of Goodfellas where a hired scissor man took Scorsese's film back into the editing bay to make it less arty and more commercial. First he lops off the beginning segment where little Ray Liotta grows up; then he amputates the end with the drug paranoia and meltdown. Then he goes through and slices out all the malignant story points where characters talk about motivations or feelings or even tell jokes. In other words, anything that suggests the characters have any lives outside of their gangster employment. What's left is a sizzle reel of hits and whackings.

This is essentially what Takeshi Kitano (Sonatine) has done with his latest film, Outrage: Way of the Yakuza. As writer, director, editor, and star, Kitano has put together a no-muss, no-fuss chess game of Japanese gangster clichés. The auteur stars as Otomo, a gunman for a mid-level boss (Jun Kunimura) who is aligned with another mid-level boss (Renji Ishbibashi) who in turn is not in the larger family and so in a tentative position in the greater yakuza community. As an outsider, he runs the risk of getting shut down for dealing drugs on the bigger family's turf. The first boss attempts to use this to his advantage, stirring up trouble to expand his territory, setting off a chain reaction of back-and-forth violence that keeps going until only one man is standing.

Other details are unimportant. That really is the movie. Otomo slaps that guy, that guy gets mad and slaps someone else, that someone else strikes back, then the friend of the one who originally got hit makes another move, and so on and so on. Why they are doing these things and to whom is not important. The dull stopgaps between the blood spray are inconsequential. What matters is that the next guy's death is more shocking and gross than the last. It's soulless to the point of callousness.

Until that stops being important either. Or maybe Takeshi Kitano just got as bored with it as I did. There are a few truly creative smackdowns--chopsticks in the ear, a dental drill attack--but then there are so many familiar, lazy scenarios surrounding them, the impact of brutality starts to feel cheap. Just about every sequence in Outrage comes out of a well-worn B-movie playbook. Blackmailing an ambassador by drugging him and staging photos of him with a dead hooker? Check. An assassination in a sauna? Check! If it's a scene in Outrage, it's one you've seen before.

Look, it's not that I was looking for Kitano to reinvent the wheel here. Part of the appeal of genre material is that it exploits expected tropes, we want to see a story that fits in a preferred mold. In truth, Outrage: Way of the Yakuza is an extremely well-made motion picture. Kitano is grouchy and mysterious, looking a little bit like a Japanese Al Bundy who just wishes he could get back to the couch and his TV. The photography by Katsumi Yangijima (Battle Royale) has a modern sparkle, and Kitano edits the action sequences to capture the savage rush of the attacks. At the same time, by depriving the audience of anyone to root for or invest in, Kitano has deglamorized gangster mythology. It's unlikely anyone will watch Outrage and daydream about being a yakuza. While this may be a noble artistic goal, it's one that has an unexpected downside: without the myth, there's nothing else really compelling us to keep watching. Otomo isn't even evil in a scintillating manner. Which may be the point. It's almost like Kitano's actively trying to keep us from caring about what goes on.

If so, my hat's off to you, sir. As far as I'm concerned, you've achieved success beyond your wildest dreams. 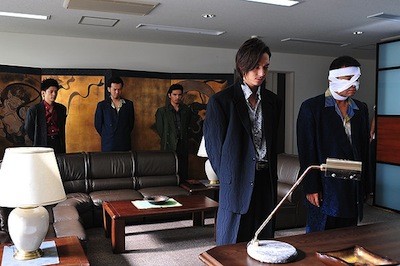 Video:
Outrage is released on Blu-Ray in its original aspect ratio of 2.35:1. The 1080p high-definition transfer looks fantastic. The resolution is sharp, the colors are realistic, and the level of detail is exceptional--sometimes to nauseating effect. Blood is thick and sticky, and it looks particularly gross on such natural looking skin.

Sound:
The Japanese soundtrack is presented as a 5.1 DTS-HD Master Audio track, and it is as good as the picture. Volume levels are strong, with forceful upsurges when the violence erupts. Gunshots shatter eardrums, and the movie's one explosion will rock the room. Alongside this, there is excellent front-to-back work with sound effects settling in different speakers to create aural depth.

The optional English subtitles read well, and there is also English Closed Captioning and a Spanish subtitle option.

Extras:
There is a good volume of extras on the Blu-Ray, though they largely focus on talking-head pieces. The two main features, "Cast Interviews: Making Outrage" (19 minutes) and "Outrage Inside Out: Behind the Scenes Documentary" (37 minutes) cover the production of the film pretty extensively.

The "Cast Panel Interview" (14 minutes) is a round-table that breaks Kitano and three of his actors out of the usual talk-directly-to-the camera mode while a larger gathering of performers speaks and fields questions for 24 minutes at the movie's premiere. Along those lines, there are also 9 minutes of Takeshi Kitano on the "Red Carpet" at Cannes, talking to folks, signing autographs, and the like.

Finally, there is a U.S. trailer and four extremely similar international TV spots, as well as trailers for other films.

FINAL THOUGHTS:
I am sure Outrage: Way of the Yakuza has its defenders, but I am not going to be one of them. It gets a straight-up Skip It from this reviewer. Takeshi Kitano has made a calculated ode to violence, stripping the traditional gangster picture down to its bloody essence. His movie is an endless string of attacks and retaliation, lacking in any hint of a meaningful story. His characters are empty avatars who exist just to beat on one another, and though some of the violence is shocking, the bulk of Outrage is stitched together using uninspired lifts from other crime films. It's a complete dud. For those who won't be swayed from their need to see Beat Takeshi exacting his vengeance on hapless flunkies, I can at least tell you that the Blu-Ray presentation is phenomenal, so you'll at least have that. 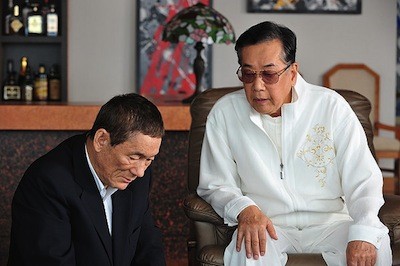