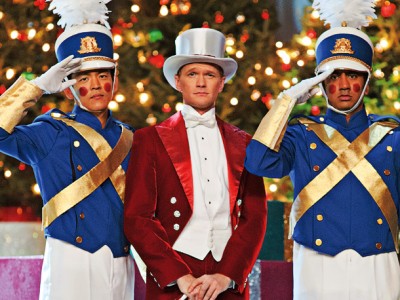 Either the "Harold & Kumar" movies are getting progressively better, or I'm just warming to these idiots. Their inaugural outing, Harold & Kumar Go to White Castle, was intermittently funny but mostly slapdash, sloppily made and wildly uneven (the "Battle-shits" scene is the low point of the series, and maybe of modern film comedy). The follow-up, Harold & Kumar Escape from Guantanamo Bay, was a modestly more successful affair, its coarseness and rough edges made more forgivable by the surprisingly sharp sociopolitical satire smuggled in among the weed-assisted giggles. And now we have A Very Harold & Kumar 3D Christmas, a full-on three-dimensional holiday extravaganza that is, walking away, the funniest and most entertaining film in the series. If these are the stoner Harry Potter movies, each one just a little bit better than the last, then 3D Christmas is the series' Prisoner of Azkaban.

Some of that may be due to a slight shift in personnel; though series writer/directors Jon Hurwitz and Hayden Schlossberg again pen the script, they were otherwise engaged directorially (the duo is helming the new American Pie movie), replaced for this go-round by Todd Strauss-Schulson. Whatever the reason (the new director, a higher budget, a smoother script), 3D Christmas is a far more coherent and well-made picture than its predecessors, and one that is (for the most part) thankfully free of the odious scatological humor and unreasonable coincidences that made the earlier films so problematic.

Several years have passed. Harold (John Cho) is happily married to Maria (Paula Garcés), with a good job and a nice house. Kumar (Kal Penn), however, has dropped out of med school and broken up with Vanessa (Danneel Harris). Due to the divergent paths their lives have taken, the story begins with them rather at odds--they haven't hung out in a couple of years, and there's a weirdness and tension between them. As insane as it may sound to float the notion of "raising the stakes" in a Harold & Kumar movie, the bad blood is something of a masterstroke, allowing the film not only an actual narrative arc, but an opportunity to explode the regular formula.

Harold is hosting Maria's extended family for Christmas--including her father (Danny Trejo--inspired casting), whose near-fanatical devotion to the rituals of the holidays come, it turns out, from a very personal place. One of those traditions is his home-grown Christmas tree, so of course Kumar manages to set it on fire within about five minutes of walking into Harold's living room. The search for a suitable replacement serves the same function as the White Castle quest in the first film and the trip to Amsterdam in the second--an excuse for an increasingly incredible series of unfortunate encounters.

There are some fumbles along the way. The duo's reconnection, over a game of beer pong, is abbreviated to the point of obscurity, and the Claymation interlude crumples under the inevitable (and unfortunate) comparisons to last year's Christmas episode of Community. Also, a little bit of Tom Lennon and his unlucky baby goes a long way, and the tie-it-all-up-with-a-neat-bow ending (a consistent problem in the series) is done no favors by the inevitable "do you know what I've been through tonight?" speech. (Seriously, let's get together as a moviegoing community and retire that sloppy trope.)

But let it be said: this is a funny movie. Neil Patrick Harris's appearance is, as always, a highlight, and the script's intermingling of his real life and his comic persona is wickedly amusing. (Ditto his closing line: "Hey, Merry Christmas guys--we'll see you in the fourth one!") Patton Oswalt's bit as a mall Santa with a lucrative sideline business is too brief, but is still a welcome addition. And the leads have developed the patter and timing of a good comedy team--Cho (with his killer deadpan) proving a reliable reactive comic actor, Penn's crackerjack timing consistently adroit.

Best of all, the filmmakers have taken the only appropriate approach to the intrusion of 3D into the proceedings: by treating it as a hack gimmick, and exploiting it solely for comic effect. With little jabs tossed into the dialogue (surveying a 3D TV as a possible Christmas gift, Harold asks, "Hasn't the whole 3D thing jumped the shark by now?") and effects sequences so overdone as to render the CG utterly cartoonish, the picture turns, in spots, into a satire of the entire bullshit craze.

Not to give the movie too much credit--it is, after all, a dumb second sequel to a stoner comedy. But it's got affection for its characters, honestly-earned laughter, and a little something to offend everyone. Yes, A Very Harold & Kumar 3D Christmas is crass and vulgar. But it is loudly, proudly, triumphantly so.