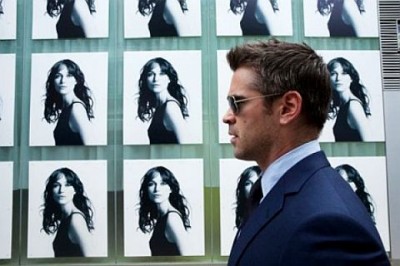 William Monahan's London Boulevard kicks off with the most joyful, tough, strap-yourself-in-cuz-we're-watchin-a-picture-show opening credit sequence in many a moon: big bold lettering, sliced-up images, and the pounding sound of the Yardbirds' "Heart Full of Soul." There's such fierce energy and raw power bursting from the screen that it seems like a promise the picture can hardly keep, and who knows, maybe it doesn't. In terms of plot, tone, and structure, the movie's something of a mess, full of pieces at odds with each other that Monahan is constantly struggling to snap together. He ultimately just slams them all into each other and barrels on through--and he does it with such sheer bravado and confidence that we end up going along with him. It doesn't really hang together, not really. But when a picture is this sleek and pleasurable, why complain?

Monahan won the Oscar for his screenplay of The Departed, and he appears to have picked up a thing or two from Scorsese on that project--at the very least, how to soak in the raw, visceral properties of rock and roll and translate them to the dynamism of images onscreen. Though set in the present, London Boulevard's soundtrack is stuffed with mid-'60s blues-rock, and those songs give the picture its pulse (chief among them the aforementioned Yardbirds tune, which both opens and closes the film, and is well-used in a third instance). It also sports a terrific, Morricone-tinged score by Sergio Pizzorno, which gives a lyrical lift to the brass-tacks British crime movie style (reminiscent of The Long Good Friday or Layer Cake).

Colin Farrell plays Mitchel, a hard-brawling tough guy just out of the pen for a fight that got out of hand. His old pal Billy (a greasy-haired Ben Chaplin) wants him to join him on some nickel-and-dime crimes, but he wants to make an honest living; he ends up signing on as a handyman--and, by default, a bit of a bodyguard--for a reclusive actress/paparazzi target (Keira Knightley). But he helps Billy out of a couple of jams, and in doing so, attracts the attention of the big boss man (Ray Winstone, resplendent in a series of pinstripe suits), who's willing to go to great lengths to get Mitchel on the payroll.

Look, this plot is as stale as last week's birthday cake, and the only genuinely fresh angle--the Knightley subplot--mixes uneasily with the rest, a soft and pokey underbelly to the scaly skin of the crime saga. It's underdeveloped and incongruent, and Knightely is left to fill in a lot of her character's blanks, with only mixed success. But somehow, the disparity of the elements gives the picture a loosey-goosey, unpredictable quality; Monahan floats from scene to scene, popping in late and ducking out early, impatient for his next hit of growling menace or fast, brutal violence.

The cast helps smooth over the potholes. Farrell is doing the kind of lean, no-nonsense acting that he does best--he can shout at Winstone, sure, but the haunted whisper he affects in a bedside scene is what burrows into the memory. David Thewlis has an enjoyably acidic turn as Knighley's snide, seen-it-all hanger-on who ends up showing a surplus of integrity. Anna Friel, the delightful pixie of Pushing Daisies, plays against type nicely.

Monahan occasionally lets the gears grind a bit too audibly when shifting tones, and the storytelling is often murky. But it says something about how deftly he coasts on pure mood that a) I'm still not entirely sure who did what to whom and why, and b) that I'm entirely unconcerned by it. London Boulevard's flaws are formidable, but they're swallowed whole by the sheer magnificence of the picture's style.