Anatomy of a Murder: Criterion Collection 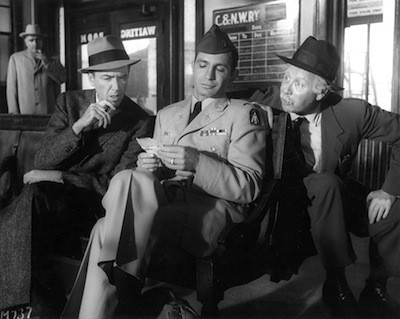 The next time you hear someone grousing about how movies are only supposed to be 90 minutes long and anything over two hours is an affront to their patience, hand them a copy of Otto Preminger's Anatomy of a Murder. After they have sat through the entire 161 minutes, if they start arguing about where the movie allegedly goes long or give a hint that they were ever bored, even for a second, stop talking to them immediately. Leave the room (or kick them out if it's your house), delete their number from your phone, and cut them out of your life immediately. Life's too short for you to need someone like that in your life.

The term "perfect film" shouldn't be bandied around lightly. It's a distinction that should be reserved for a movie like Anatomy of a Murder. The 1959 production is a lot of things: it's a legal drama, a social parable, and a relationship picture. It has humor, menace, and even grisly crimes. It touches on deeper issues of friendship, the bonds between man and wife, and the difficult ethical quandaries that go hand in hand with a complex system of justice. Sure, there are no real fistfights on screen, but we sure hear the details of a lot of off-screen action. About all Anatomy of a Murder really lacks is romance.

Anatomy of a Murder was written by Wendell Mayes (The Stalking Moon) from a novel by Robert Traver. Traver was the pen name of Judge John D. Voelker, who had served as a defense attorney in Michigan in the early 1950s and was counsel on the original murder case that this story was based on. In the movie, the lawyer is called Paul Biegler, and he is played by James Stewart. Paul is a confirmed bachelor and a small-town counselor with passions for jazz music and fishing. In fact, he was out on a lake with rod and reel when Army Lieutenant Frederick Manion (Ben Gazzara, The Strange One) walked into a bar and shot the owner six times. Manion did it because he believed the bartender had raped his wife, Laura (Lee Remick, A Face in the Crowd). He believed it was what any decent man would do. It appears to be an open and shut case; Biegler takes it anyway.

Most of Anatomy of a Murder is given over to the trial, including the investigation on Biegler's part that not only leads up to the start of the proceedings, but is also woven into them. Helping Paul out is his secretary Maida (Eve Arden, Grease) and his best friend Parnell (Arthur O'Connell, Cimarron), an attorney who has stopped practicing as a result of a drinking problem. Brought in to shut down Biegler's defense and aid the local prosecutor is Claude Dancer (George C. Scott, Patton), a state's attorney from the city. These guys make a classic genre duo: rural vs. urban, substance vs. flash. Jimmy Stewart even has a line about being a "simple country lawyer." The two of them go toe to toe in the courtroom, poking holes in the other's version of events. Neither Manion nor his wife are exactly reliable witnesses. He's a hothead and she's a flirt. 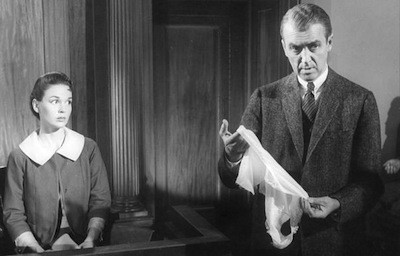 Upon release, Anatomy of a Murder caused a scandal for its frank use of words like "sperm" and "panties." Those words have since lost their ability to shock, but the details that come out about the actual attack have not softened over time. Nor has our outrage over how Laura is treated by authorities in order to minimize what was done to her. On the contrary, these days, we are probably more sensitive to it. What makes Anatomy of a Murder amazing, however, is that even as we react to Laura's horrific story, we can't help but wonder if we really believe her. As in any true crime tale, every participant has many reasons to lie. We never really entertain Manion's defense of temporary insanity, and yet, we also somehow collude in this bending of the truth. Our weighing of the case is often not based on whether any of the actions were right or wrong, just which guy was more rotten--the murderer or the one he killed.

To be honest, Ben Gazzara is lucky to have Jimmy Stewart on his side. The former is oily and cocky, whereas the latter, of course, has a certain homespun, trustworthy charm. Both actors always appear to be thinking, but where Gazzara is understandably inscrutable and shifty, Stewart's motivations always seem clear. He is a man solving a puzzle, consistently trying to work out the next move. It's because we like him so much that we root for the case to go his way--which may have been Preminger's point in casting him, to challenge our sense of justice by drawing on our prior allegiance to a movie star and perhaps expose our own prejudices in the process.

Anatomy of a Murder is packed with talent from top to bottom, from the famous credits sequence by Saul Bass and all the way through with every note of Duke Ellington's snazzy score. Preminger's narrative is smart and insightful, and his mis-en-scene is light on its feet. He uses the real environments to capture an accurate image of the average American town, including both the sense of true community and also those who are marginalized from the "mainstream." Paul Biegler serves as a sort of cultural nexus for the time. As Laura Manion puts it, he's a funny kind of lawyer. He employs old-fashioned common sense in how he approaches a trial, and yet he smokes small cigars and plays piano in juke joints. He is progressive about race and sex, and yet a guy of staunch moral fiber. You have a sense that he'd likely get on just fine in the decade that was just to come. He might even grab a drink with Atticus Finch and trade some war stores.

So, too, does Anatomy of a Murder sit in this sweet spot between the old and the new. Its matter-of-fact writing was progressive and daring, and yet this is pure entertainment in the tradition of Hollywood's Golden Age. It's intelligent and strident in purpose, but Anatomy of a Murder never forgets that its primary duty is to hold the audience's interest. It's easy to watch, even if it doesn't go easy on the viewer and resort to simple representations of difficult issues. Every scene advances the narrative, and every shot is constructed to impart the essential information with clarity and style. There is not a hair out of place, and at the same time, not a moment that doesn't feel spontaneous. No matter how many times I see it, it always feels fresh and new, like it's my very first time, and when the credits roll, it's tempting to just skip back to 1 and start the whole thing again. 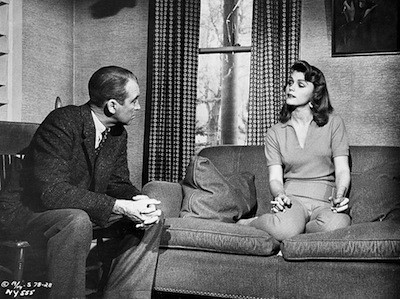 Video:
The 1080p, MPEG-4 AVC-encoded transfer for Anatomy of a Murder is showed at a 1.85:1 aspect ratio. The new high-def restoration should leave fans of the film enormously chuffed. The image has been cleaned up spectacularly, removing any specks, dirt, or scratches and creating a stunning balance between light and dark in Sam Leavitt's black-and-white photography. The surface quality is fantastic, with a soft grain adding a nice filmic texture to the look of the Blu-Ray and sharp resolution throughout.

Sound:
Criterion offers two choices on the soundtrack: a more standard uncompressed mono option and a new DTS-HD Master Audio 5.1 option. Both are excellent, and choosing one over the other is going to be down to whether or not you prefer a traditional approach or if you'd rather hear a little more heft in your speakers, particularly in relation to the Duke Ellington music. Both are clean and clear without any glitches. If you want to hear the difference, skip to track 5 when Biegler is going to the hotel bar. Switch back and forth and give a good listen to where the brass appears in the two mixes.

English subtitles for the deaf and hearing impaired are also provided.

Extras:
Criterion includes its usual helpful interior booklet, complete with a reprint of a 1959 article on Joe Welch (the man who played the judge in the movie) and a new critical piece by Nick Pinkerton. In terms of design, kudos to Criterion to sticking with a vintage look that mimics the original ad campaign and Saul Bass titles/poster. 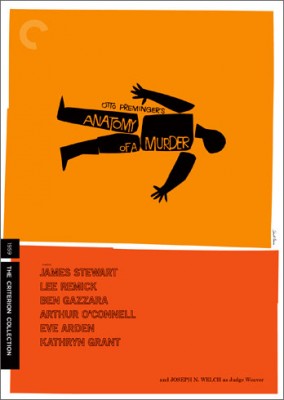 In addition to the printed material, there are a bunch of extras on the disc itself, including a bevy of interviews and clips focusing on the filmmakers. Otto Preminger-biographer Foster Hirsch talks about the director in a new 30-minute interview, while we see the opinionated Preminger at work in an 11-minute collection of clips from an appearance sparring with William F. Buckley Jr. on a 1967 episode of "Firing Line."

Several extras focus on the fact that the film was based on a real murder and shot in the town where that crime took place. About five minutes of vintage newsreel footage shows the production at work, as do a collection of photos from Life magazine's Gjon Mill. There is also 30 minutes taken from a work-in-progress documentary, Anatomy of "Anatomy," catching up with the townspeople who served as extras and sharing their experiences interacting on a day-to-day basis with the actors and the film crew.

There is also a theatrical trailer. All extras are in high-definition.

FINAL THOUGHTS:
DVD Talk Collector Series. You won't find a better package of a better film. A fantastic presentation of a true American classic. Otto Preminger's Anatomy of a Murder is a cracking courtroom drama with an amazing ensemble cast. The script tackles a difficult case where good guys and bad guys aren't clear and no single truth ever emerges. Jimmy Stewart's star power is in fine luster here as the lawyer defending the soldier who shot another man for sexually assaulting his wife. Was he wrong under the law, but justified according to an unspoken social contract? Did he lose his mind or is he just a bad-tempered bruiser? Does any of that bother us or do we just want to see Jimmy Stewart win his case? These ethical conundrums invigorate what is already a well-constructed narrative, ensuring that there is no need for deliberation: Anatomy of a Murder is a finely crafted piece of motion picture entertainment.