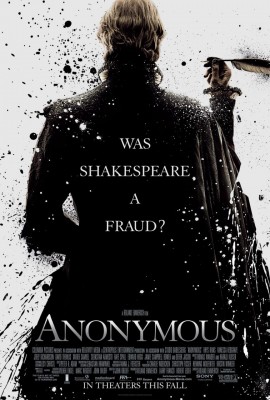 Roland Emmerich, purveyor of blockbusters 2012 and Independence Day, travels to 16th century London in Anonymous, which floats the idea that William Shakespeare's works were actually created by Edward de Vere, 17th Earl of Oxford. The reasons behind this political bait and switch are muddy, and Anonymous suffers from its frequent jumps in time and host of indistinguishable characters. Even so, Emmerich's stuffy soap opera is frequently compelling thanks to a brand of backstabbing, incest and fornicating last seen in House Lannister. Emmerich brings London to life with impressive visual effects and costumes, and actors Rhys Ifans and Jamie Campbell Bower make a compelling de Vere.

Anonymous is set in Elizabethan London as the Tudors and Cecils scheme over the next heir to the throne. De Vere (Bower in youth, Ifans in later years) was a talented writer and actor from childhood, and charmed a young Queen Elizabeth I (Joely Richardson/Vanessa Redgrave). After de Vere kills a servant spying on his work, William Cecil (David Thewlis) forces de Vere to marry his daughter, Anne (Helen Baxendale). De Vere later fathers a child with Queen Elizabeth, and although the boy's lineage is concealed, he becomes Henry Wriothesley, 3rd Earl of Southampton (Xavier Samuel). As Elizabeth nears the end of her life, Cecil plots to bring James (James Clyde), son of Mary, Queen of Scots, to the throne, while others threaten to reveal the Earl of Southampton's true identity.

With all the royal squabbling going on, it is easy to forget that Anonymous is actually about Shakespeare. Although de Vere is a brilliant playwright, his family condemns his work as sinful, and de Vere risks his political stability by continuing to publish under his real name. De Vere tasks fellow playwright Ben Jonson (Sebastian Armesto) with taking credit for his works, but a crass young actor named William Shakespeare (Rafe Spall) comes forth to take credit instead. Anonymous asks its audience to consider whether Shakespeare, uneducated and kin to many illiterates, could have created works like Hamlet and Macbeth. The Shakespeare who signs his name to de Vere's work is especially crude and unrefined; a deliberate attempt by the filmmakers to contrast Shakespeare with the calculating de Vere.

The idea that Shakespeare, perhaps the best-known English-language writer of all time, was a fraud is a contentious one. The theories explored here are far from undisputed, and historians likely will not be sold on the conspiracy. The Shakespeare controversy is really just an excuse to create a pulpy period soap, and Anonymous keeps the drama coming. Snide comments about the Tudors' choice in bedfellows turn out to be accurate, and there is plenty of deception involved in choosing Elizabeth's heir. I suspect many viewers will have trouble following all the competing storylines, though the action wraps up fairly neatly at the end.

Emmerich brings his keen visual eye to Anonymous, which uses impressive, subtle visual effects to create the streets and castles of 16th century London. These digitally enhanced sets are very impressive, as are the costumes and props. Emmerich has a tendency to let his actors become bombastic, but this only happens in a few scenes. The whole Shakespeare conspiracy may be hooey, but this does not mean Anonymous is not worth taking seriously. The film represents an interesting progression for Emmerich, who, until now, has not directed a period piece, and his visual style matches the high drama. Anonymous is contentious and not exactly subtle, but it breathes new life into the often stuffy world of history's most famous playwright.

Sony gives Anonymous a crystal-clear 2.35:1/1080p/AVC-encoded transfer that celebrates the film's impressive visuals. The film's period setting is full of warm colors and intricate costumes, and the transfer is immaculately detailed and deep. Texture and sharpness are excellent, and skin tones are accurate. Colors are bold and do not bleed, and black levels only waver slightly in a few scenes. Anonymous is beautifully shot, and the transfer allows viewers to marvel over the recreated Globe Theater, crowded streets of London and hallways of Elizabeth's palace. The transfer is not encumbered with compression artifacts or noise reduction.

Anonymous receives a surprisingly aggressive sound mix, delivered in an immersive 5.1 DTS-HD Master Audio track that displays impressive range and clarity. Dialogue is consistently clear and balanced appropriately. Effects, in the form of raging flames and rapid gunfire, are bold and weighty, and the track has a heavy surround and LFE presence. Dialogue and effects pans are frequent and well executed, and the score is rich and well balanced. A Spanish 5.1 Dolby Digital track and an English DVS track are also available, as are English, English SDH, French and Spanish Subtitles.

In the Commentary with Director Roland Emmerich and Writer John Orloff, the director discusses the visual effects used to create historical London, working with the actors and the legend of Shakespeare. Most interesting is Emmerich's discussion on why he had to use obviously fictional details to make a compelling story. The several deleted scenes (2:54/HD) and extended scenes (3:29/HD) add little to the final film. More Than Special Effects (13:08/HD) is a solid look at the film's visual effects, and Who is the Real Shakespeare? (10:39/HD) sees the cast and crew weigh in on the film's fraudulent Shakespeare. The extras conclude with casting featurette Speak the Speak... (16:14/HD) and some bonus previews.

Unpleasant is the notion that William Shakespeare may not have actually written his most famous works. Whether or not this is true may never be known, but Anonymous uses this potential fraud to spark a revolution. Director Roland Emmerich's period drama features plenty of Elizabethan throne drama alongside the story of Edward de Vere, 17th Earl of Oxford, whose anonymously penned works are claimed by a crass actor named William Shakespeare. The political backstabbing and large cast occasionally grow tiresome, but Emmerich's film receives his typically strong visuals, and all the royal drama makes for good entertainment. Recommended.