Showtime // Unrated // February 21, 2012
List Price: $39.97 [Buy now and save at Amazon]
Review by Stuart Galbraith IV | posted February 21, 2012 | E-mail the Author
As I discuss in my reviews of Nurse Jackie's first and second seasons, the Showtime series starring Edie Falco (The Sopranos) in the Emmy-winning title role* just gets better and better. I didn't care for the show initially; the first few episodes of season one struck me as overly-familiar variations on Paddy Chayefsky's The Hospital (and later the NBC series St. Elsewhere), black comedy take on a hopelessly broken health care system, albeit done on a much smaller, more intimate, 30-minute show scale.

And yet while Nurse Jackie sports a similar mélange of deliriously eccentric characters, at its core it is a portrait of a working mother with two little girls just barely holding everything together: her marriage; her children's education, wants and needs; her relationship to them; her management of an emergency room where there's never enough money or supplies or qualified doctors. Outwardly she's rock-solid, strong, assertive, confident, and unfazed by the dozens of problems and injustices hurled at her every day.

She copes by secretly taking massive amounts of drugs, mostly pilfered from her hospital's pharmacy, squirreled away so that a) no one will learn about her addiction while b) providing easy and immediate access whenever she needs one.

Nurse Jackie is a fascinating show in that its main character is an outstanding nurse and a dedicated parent, but also an unfaithful wife, a drug addict spiraling out of control, a habitual liar because of this, as well as incredibly reckless and irresponsible, especially toward her family. Falco is terrific in the part but the entire cast is great, too, especially Merritt Wever and Anna Deavere Smith, who've created unforgettable, funny and unique characters.

Lionsgate's Blu-ray of Nurse Jackie - Season Three is once again way above average, with two discs containing all 12 season two episodes, buttressed by strong transfers and a lot of extra features. 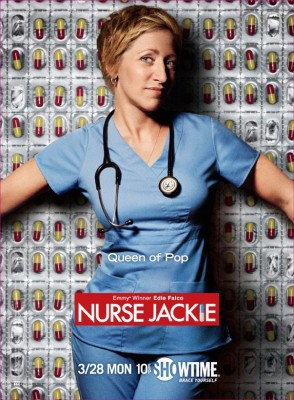 Previously on Nurse Jackie: Season two ended with everything at once going to Hell in a hand-basket. Jackie (Falco), a veteran emergency room nurse at Manhattan's All Saints' Hospital, is hooked on painkillers and recreational drugs. Her bar-owner husband Kevin (Dominic Fumusa) and best friend, obscenely wealthy Dr. Eleanor O'Hara (Eve Best), each have stumbled upon Jackie's secret life and stage an intervention.

Jackie, however, vehemently refused to acknowledge her addiction. Nevertheless, her terrible breach of their trust is not without consequences. Dr. O'Hara refuses to speak with her outside of work, while Kevin passively-aggressively carries on, channeling his energies toward caring for his girls while increasingly ignoring Jackie's input.

Further, there's the slightest hint that Kevin may actually be aware of Jackie's past infidelities with pharmacist Eddie (Paul Schulze). In season one, she shamelessly led him on in order to facilitate her addiction, she posing as single, childless, and available. Once he learned of her secret family, semi-psychotic Eddie became Kevin's best pal, forever hanging out at Kevin's bar and even Jackie's home, deliberately creating enormous tension whenever all three found themselves together, that at any moment Eddie might spill the beans about his affair.

Season Two had been especially good in the realistic, funny, and harrowing manner in which Jackie's addiction sends her personal and professional lives spiraling toward total destruction. The discovery and intervention that climaxed that season's finale (and Jackie's refusal to go along with Kevin and Eleanor's demands) strongly hinted that her life was about to turn a corner, or maybe violently crash headlong into a telephone pole.

Instead, she deftly delays the inevitable, with more lies and deceptions than ever before, though at the cost of all credibility with her husband and best friend. This leads to some interesting dynamics among them, and if anything the enormous tension generating at the end of the previous season soon returns and, once again, Jackie appears headed toward another crash-and-burn showdown with family, friends, and co-workers.

As noted in my reviews of Seasons One and Two, Nurse Jackie episodes run about 26 minutes each. This is the length half-hour shows used to be back in the 1950s and '60s, before encroaching commercial interruptions reduced the number to 24 and, finally, to around 22 minutes. Those extra four minutes are critical; Nurse Jackie works great in a 26-minute format and it makes me wish more current series could return to this ideal running time.

Nurse Jackie - Season Three is presented in 1.78:1 widescreen in 1080p high-definition. Twelve half-hour episodes are presented on two single-sided, region A discs (earlier sets were region-free), supported by optional English and Spanish subtitles. The 7.1 DTS-HD Master Audio is impressive, though I could do without the format's logo at the head of every episode.

Supplements include several featurettes, all in high-def: the self-explanatory "Inside Akalitus" and "Jackie's Guys." Also included are audio commentary tracks by the cast and crew on several episodes; though lacking a moderator they're fairly revealing and interesting, good for when you want to listen to something while picking up around the house. Finally, a gag reel rounds out the package.

Currently this critic's favorite continuing American TV drama, Nurse Jackie gets better and better while the Blu-ray offers a spot-on presentation and is Highly Recommended.

* Oddly, that Emmy was for Best Actress in a Comedy Series. Falco and others rightly felt that hers was chiefly a dramatic, rather than comedic performance, even though Nurse Jackie itself is often very funny. The great '80s series St. Elsewhere was always considered a drama, even though its ratio of humor to drama is about the same.