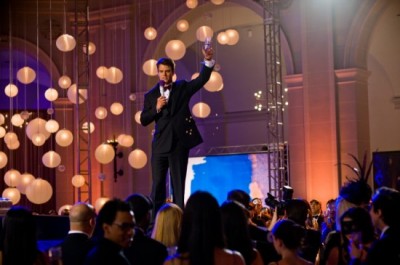 Let's start with the music, because that's a good a place as any. The score for Garry Marshall's all-star clusterfuck, New Year's Eve, is provided by John Debney, and he worked for his paycheck--every single moment in the film is smothered in music, slathered in it, every potential change in emotion or tempo telegraphed, loudly, by the non-stop music. Sad scene? Slow piano. Charming, cutesy scene? Gimme an uptempo, jazzy number. Hey look, there's Zac Efron--he's young and hip, so let's switch this plinky music over to somethin' with some guitars in it! Yay-uh! Oh hey, here comes Colombian sexbomb Sofia Vergara! Put in some salsa music!

You guys, I'm serious, they put in salsa music for her entrance. I guess we should be relieved that it's such a painfully white movie, if for no other reason than to spare us the sound of a gong accompanying the entrance of any Asian characters.

The film is a sequel, of sorts, to Marshall's 2010 hit Valentine's Day, and it repeats the same formula (itself shamefully stolen from Love, Actually): assemble a gaggle of A- and B-listers looking for an easy payday, pair them off, assemble them around a holiday, and let the rom-com sparks... not so much fly as sort of flail around for a while. As before, the cast mixes lesser lights (Katherine Heigl, Sarah Jessica Parker, Jon Bon Jovi, Ashton Kutcher, Josh Duhamel) with performers who should really know better (Halle Berry, Hilary Swank, Michelle Pfeiffer, Seth Meyers, Carla Gugino, Abigail Breslin and, God help us, Robert DeNiro). No one comes out of it smelling very good.

But who could, given this script? It's the work of Katherine Fugate (who also wrote VD), and she appears to have sat down and made a checklist of every tired cinematic cliché she could conjure up. There are split lovers reunited, womanizers ready for "commitment," estranged children, and a horny old man. One couple met on the previous New Year's Eve, and agreed then to meet again this year. (Oh, think it'll happen?) A pair of strangers are trapped in an elevator. (Seriously.) A back-up singer gets her chance to shine. They even trot out a double childbirth. A DOUBLE CHILDBIRTH. I can't imagine why they didn't have Jon Bon Jovi's long-last dad show up at the very last minute to watch his rock show in Times Square. I mean, if you're gonna trot out the wheezy old tropes, bring 'em all.

The application of the genre label "romantic comedy" would indicate that the film is funny, but it's not--it is simply, painfully not funny. There is not one laugh to be found in it, and, if memory serves, only one smile (provided by the dependable Marshall utility player Larry Miller). Scene after scene is structured as if it were a comedy--there is a set-up, and a line or reaction delivered like a punchline, followed by a cut to the next scene as though the previous had arrived somewhere humorous. They never arrive at anything remotely humorous. They're so desperate for laughs that they rip off Vergara's mangled English shtick from Modern Family, but it plays as though it's been rewritten by an exceptionally dull-witted 12-year-old.

The dialogue is mostly inexplicable. When Parker's single mom discovers that her daughter (Breslin) has snuck out through her bedroom window to go to Times Square with her friends, Parker gets this exit line: "I fought so hard for custody..." What is that, funny? Tragic? Ironic? Or is it more of Fugate's awkward exposition, manifested elsewhere with lines like "This will be our biggest A-list party to date!" (For the record, the only celebrity at that party is Penny Marshall--the director's sister.) When Bon Jovi tells Heigl he's "ready to commit," she musters up all her strength and says, "Me too, Daniel. I'm ready to commit to what I really love: my work." (Okay, maybe there was one laugh in the movie.) When Swank gives Bon Jovi the standard trite advice about how to treat a lady, he notes (accurately), "Sounds familiar." She replies, "We girls, we have a handbook." NO YOU DON'T. THIS MOVIE JUST THINKS YOU DO.

The film is so over-plotted and over-busy that none of the characters are actually allowed to develop; their arcs seem forced, arbitrary, apparently occurring during the long stretches when they're crowded off-screen by the dozen other tired narratives. And Marshall doesn't help matters any; he hasn't made a film worth a damn in a while (a long while), but a director with this many credits has no excuse for the kind of sloppy filmmaking on display here. Cherry Jones gives a speech in a medium shot that makes clear, beyond any doubt, that she is not speaking. (Use a crowd cutaway!) Yeardley Smith reads from a note in an over-the-shoulder shot, and we can plainly see that the location has been added in post, since it's not on the note. (Use her close-up!) He places Jessica Biel between Seth Meyers and Til Schweiger as they argue, and keeps cutting away to her swiveling her head and mugging. You get the idea.

A few other, random observations:

- Nothing on this earth has less soul than Jon Bon Jovi singing "I Can't Turn You Loose."

- The end credits are accompanied by, yep, outtakes. If there have been more mirthless outtakes in a major motion picture, I haven't seen them. These look like hostage videos.

- Compare Ryan Seacrest's scenes here with his scenes in Knocked Up for a case study in how to use and not use a vapid "personality."

- Watch Swank's big, string-scored speech about what New Year's is all about, and ask yourself how much this two-time Oscar winner's credibility sold for.

- Once the woman Josh Duhamel is meeting is revealed, think back to the one other thing we know about the character. Locked in on it? Great. How was she there at midnight the year before?

- The film is set on New Year's Eve 2011-2012, so (as a New Yorker), it's a little distracting that the Times Square billboards are advertising shows that have closed, like Wonderland and Promises Promises. Too picky? Then chew on this: Warner Brothers made room in the budget to CG in a giant billboard for Sherlock Holmes: Game of Shadows (out next week, from Warner Brothers!), which is seen prominently, twice, including in what is basically the closing shot. Synergy!

And so on. New Year's Eve is a nightmare. It's relentlessly plastic--a mannequin parade. No one talks, thinks, or acts like this, except in movies, and you don't believe (or care about) a single, solitary second of it. Maybe there were worse movies released this year. If so, I don't wanna see them.