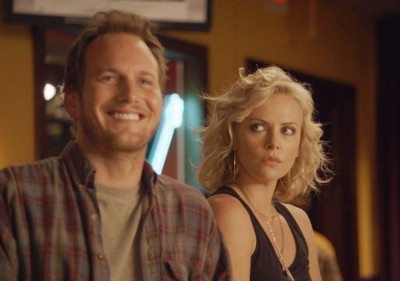 Mavis Gary, Charlize Theron's leading character in Jason Reitman's Young Adult, is unapologetically brusque, brittle, and unlikable. The ghost-writer of a young adult franchise, she treats her work with such contempt that the Word file for her current masterpiece is called "pieceofshit.doc." She wakes up each morning in her clothes, sleeping off the previous evening's drinking, and pours Diet Coke down her throat. Her only consistent companion is her tiny, unappreciated dog. She spends her life in a dissatisfied daze, with the aural accompaniment of E! reality shows.

And then she gets an email. Buddy Slade (Patrick Wilson), her high-school boyfriend, and his wife Beth (Elizabeth Reaser), have had a baby. The email gets her goat. It must have been her ex's cry for help. How miserable he must be! And with that, she packs a back and drives back to her hometown to win him back. "Don't you get it?" she asks a skeptic, incredulously. "Love conquers all!"

It is easy to imagine, in lesser hands, what an obvious, cartoonish effort this could have been; it's the kind of shrill, half-assed comedy that Jennifer Aniston or Katherine Heigl could do in their sleep. But this is not an obvious movie, or an easy one. Reitman and screenwriter Diablo Cody see the easy jokes, the pat conflicts and expected payoffs, and decide to bypass them. In doing so, they discover something infinitely more interesting, and convey substantially more truth.

Reitman's style is subtle and unassuming; his scenes are often short and impressionistic, and though his tightly-photographed montages of Mavis's beauty rituals are somewhat reminiscent of the packing bits in Up in the Air, he's not out to dazzle us with his visual wizardry or shot construction. He creates an atmosphere for the characters to exist in, full of little details and lived-in spaces, and he clearly trusts his actors. Theron understands this character (she's got her withering stare down cold), and neither condescends nor apologizes for her; you can't catch her acting here, not for a second. Wilson does the good-natured dope--a trickier type than you might think--disarmingly well. Reaser doesn't take any of the obvious tacks in her characterization; she's just real, and good. And Patton Oswalt, already a pro with Cody's dialogue (he appeared semi-regularly on her Showtime series The United States of Tara) is flat-out excellent as Mavis's bullied high-school classmate who becomes her unlikely drinking partner and (mostly unsuccessfully) her voice of reason. He's got a big speech that feels a little too much like a big speech--but he uses that, as though the character has rehearsed this blow-up before, and always has it in the chamber.

The film marks the reteaming of director Reitman and screenwriter Cody, who early collaborated on Juno, which has somehow become an incredibly divisive, love-it-or-hate-it picture. I love it, and have little patience for those who hate it, and while I'm not sure if Cody does either, this script almost feels like a direct rebuke to those who made her a pop-culture whipping girl; it's a smart, straight-up, slang-free piece of work, less interested in lingo than good old-fashioned storytelling. It's a film that recalls, in the complexity of its characters and the occasional acidity of its approach, the films of Billy Wilder. (Yes, I'm serious.)

Nowhere is this clearer than in the scene of Mavis's public unraveling, a bit utterly inevitable in this kind of story (to dodge it would be equivalent to skipping the big showdown at the end of a Western), but played here with a remarkable clarity. The scene is uncompromisingly raw and honest--and then it's funny. Same thing with the movie. Young Adult sounds utterly trite and predictable, but the laughs stick in your throat.