Suspicion (1941) is one of those Alfred Hitchcock movies that somehow works despite itself. The story, about a spinster-like woman who comes to realize that the charming cad she impulsively married might be a killer, must have seemed kinda creaky even in the '40s. Glamorous Joan Fontaine was miscast as the lead, and her fluttery performance (Oscar notwithstanding) hasn't held up too well. As the gambler who woos Fontaine to the altar, Cary Grant made a better impression. The actors' scenes together are terrific examples of old-style Hollywood Star Power, and Hitchcock's skillfully handles their increasingly tense relationship by ratcheting up the suspense - right up until the film's ridiculous ending, that is.

In other words, it's a flawed classic that might do well for an update. That must have been the thinking behind the remake of that film starring Jane Curtin (Saturday Night Live, Kate & Allie) and Anthony Andrews (Brideshead Revisited), which originally aired as an episode of PBS's anthology series American Playhouse in 1988. This version benefits from being filmed in on actual locales throughout England and not some airless Hollywood studio, and it also offers a rare dramatic turn from the otherwise comedic Curtin.

The film begins with Curtin's shy, bookish Lina McLaidlaw taking the train to visit her mother and stepfather at their British country estate. In her train compartment, she meets-cute with a fellow passenger who is ducking out of not having the proper train ticket. The passenger is Johnny Aysgarth (Andrews), a local playboy socialite. The train episode is forgotten until Johnny spies Lina at a fox hunt later on. As soon as he learns that Lina is linked to the wealthy Lord McLaidlaw, he decides to drop by the McLaidlaw estate to take her to church. Johnny begins to pursue Lina romantically, even though Lena is puzzled as to what the dashing man sees in the plain, provincial likes of herself. Back at her parents', Lena learns that Johnny has an unsavory reputation around the community as a gambler and womanizer. Despite the warnings, Lena brightens up when she's invited to a local party that Johnny is attending. The two share a whirlwind evening, culminating in him declaring his love for her.

After Lina and Johnny impulsively marry, Lina begins to find out the true nature of her new husband's personality, bit by bit. The two set up house in Johnny's luxe, art-filled estate where he keeps his own personal secretary. After Lina finds that their honeymoon vacation was paid for with borrowed cash, she explains that her money can't realistically pay for Johnny's lavish lifestyle. He promises to find a job, only to wind up hocking a pair of heirloom chairs given as a wedding gift by Lina's stepdad to gamble at the horse races. Such is the life of being married to a cad. Upon meeting Johnny's best friend Beaky Thwaite (Jonathan Lynn), she finds that things like the chair-hocking episode are just Johnny being Johnny. The man comes back from a "business" trip with a brand new fur coat for his bride, a gift that he later confesses was bought with a windfall from the racetrack. He made enough money to buy back Lina's precious chairs, however, so all is well again in this screwed-up household. 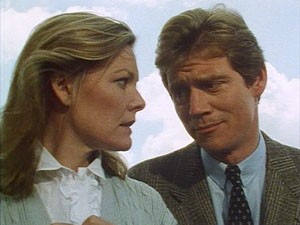 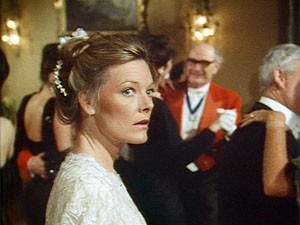 As the film progresses, Lina uncovers more strange doings related to Johnny. Visiting her husband's office one day, she learns that Johnny was actually fired several weeks earlier. Johnny's callous reaction to Beaky's nearly dying right in front of them reveals a sinister aspect to him that Lina can't bear. The conveniently timed death of Lina's stepfather, Lord McLaidlaw, does little to improve their increasingly strained marriage. With new income in the household, Johnny decides to team up with Beaky to develop a luxury hotel on some seaside property. Lina's growing suspicion is aroused when Johnny arranges to meet Beaky on the dangerously perched, cliffside lot. She is relieved to find Beaky turning up alive the next day, but when Beaky is later found murdered in a pub (with Johnny as a suspect) her doubt escalates into paranoia. She visits her friend, a mystery novelist, and learns that Johnny borrowed a book on murder techniques. Adding to her mounting dread is the fact that Johnny made inquiries about an insurance policy made in the event of her death. At a dinner party, the talk turns to who in the room could theoretically be a murderer. It proves to be too much for Lina, and she takes to bed early. Later on that night, a sullen Johnny brings the ailing Lina a foreboding glass of milk.

Although there could have been something decent made of this project (changing the ending that Hitchcock famously detested would have helped), for the most part this edition of Suspicion is a dull, dreary affair. Jane Curtin was an offbeat choice for the role of Lina - although she has exactly the right uptight, New England-y persona for the part, she approaches it with a heavy-handed dourness that becomes completely numbing as the film rolls along. Anthony Andrews' Johnny isn't much of an improvement. He portrays Johnny as a one-dimensionally smug, arrogant fellow. It's hard to see what attracted Lina to him, especially when his constant use nickname "monkey face" for Lina comes across like a passive-agressive insult. From Cary Grant, it sounded cute (if patronizing). From Andrews, it sounds creepy.

Strangely enough, when watching this I kept picturing the story enacted by Curtin's Kate & Allie character, Allie Lowell (this was filmed at around the same time that sitcom was winding down). With a few modifications, this might have made for an excellent, TV movie-length episode of that particular show. Where's Susan Saint James when you need her? 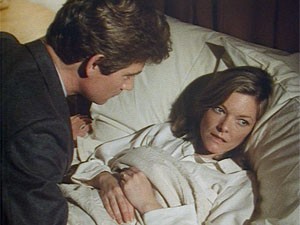 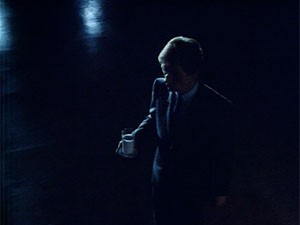 
Horizon Movies' DVD edition of Suspicion uses a presentable copy of the film which has a few instances of aging, such as the occasional vertical hairlines. The 1.33:1, 4x3 image has been authored in a way that ups the sharpness too much, over-emphasizing the grain of the original print.

The DVD sports an okay original mono soundtrack, with no subtitle options. The sound and image were off-synch by about one second, however, which makes watching this DVD an annoyance.


The '80s TV version of Suspicion might be worth a rental, just barely, for Jane Curtin fans curious about how she handled this rare dramatic turn. All others would be well advised to hold on to their Hitchcock DVDs and pretend this dour, static little remake never happened. Skip it.