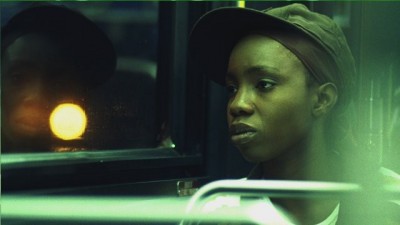 I don't know these girls. We don't see them in movies very often. Alike (Adepero Oduye) and Laura (Pernell Walker) are teenage black girls, although the opening scenes deliberately obscure their sexual identities; in the dimness of a nightclub, in the mass of bodies on the dance floor, we're not sure who's what. They're "AG" (short for aggressive--and yes, I had to look it up on Urban Dictionary), lesbians who dress and act like thugged-out guys; they listen to rock music and have their own specific style. On their way home from the club where they hang out with other AGs and the bi-curious girls who are drawn to them, we see Alike ("Lee" for short) undergo a transformation--she loses the baseball cap and loose-fitting rugby jersey, revealing a form-fitting tank top underneath, and snaps in her earrings. Lee is 17, and she's already living a double life. Pariah is her story.

It is the feature narrative debut of Dee Rees, who based it on an earlier short film. Her protagonist lives in Brooklyn, in a modestly comfortable two-parent home; they're middle class, though her father Arthur (Charles Parnell) is working two jobs to keep them there. Her mother Audrey (Kim Wayans) works as a nurse and is a dedicated churchgoer. Arthur is barely home, but Audrey is, and in spite of Lee's little costume changes, she sees what's going on: "God doesn't make mistakes," she tells her daughter. Audrey thinks Laura's influence is to blame, and tries to buddy Lee up with Bina (Aasha Davis), a fellow churchgoer's daughter. Joke's on her--Bina quickly develops a crush on Lee.

Rees develops a refreshing tentativeness in Bina and Lee's encounters; they play with an astonishing honesty, since teen actors (or older actors playing teens) so often do their scenes with either the slick professionalism of porn stars or as objects of comic ridicule. That naturalism is present throughout the picture, in which dialogue scenes feel overheard and emotional moments rear up unexpectedly, with little preparation (there is one late scene of such raw power that it's rather overwhelming). The film is technically rough--the low budget shows--but grittily stylish; it doesn't look pretty, but it looks good, if that makes any sense.

Oduye, in a demanding leading role, is excellent; she is withdrawn and introverted, but when she smiles, she's got the warm, open face of a young Whoopi Goldberg. It's an understated but devastating performance--watch very carefully how she reacts to her first kiss, or the way she says "I'll be careful" after her father breaks her heart. Parnell makes a believable father figure (his very different relationships with his two daughters are fully formed), and has a sure sense of comic timing that lends some much-needed lightness to his scenes. Wayans occasionally pushes a little too hard, but has some deeply felt moments as well.

There is something to be said for movies that show us a scene or subculture we haven't seen before; it's startling to see a story we're so unfamiliar with. At one point, Lee asks Bina why she liked one of her poems, and Bina replies, simply, "It felt real." So does Pariah. And don't get me wrong, it may not be--I've got no basis for comparison. But maybe that's the point.