Lady for a Day

In addition to being a very good movie, it invites comparison to Capra's 1961 remake, Pocketful of Miracles, which like Capra's excellent Broadway Bill (1934) and its so-so remake, Riding High (1950), duplicates Lady for a Day nearly scene-for-scene, line-for-line, with only minor changes, even though the remake is considerably longer and protracted.

In the case of Broadway Bill and Riding High the fascination is Capra's extensive use of stock footage from the original for the remake, and especially his use of actors from the original appearing in both old and new footage for the remake. In the case of Lady for a Day and Pocketful of Miracles, what's interesting is the casting. Basically, how much better May Robson's Apple Annie is over Bette Davis in the remake, yet how superior Glenn Ford's sentimental gangster is to Warren William's.

Lady for a Day was originally released by Columbia, but rights now appear to be in the hands of Capra's estate and this release comes courtesy of Inception Media Group. At a guess I'd say Capra probably bought all rights to the 1933 film to facilitate the remake (which was released by United Artists). The original camera negative no longer survives but the picture has been very impressively restored using a duplicate negative Capra had made using film elements from his own personal collection. 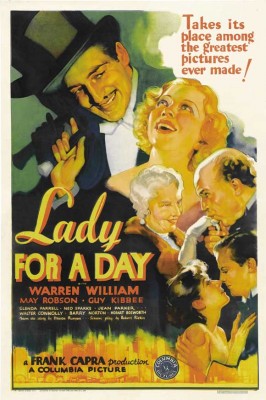 Apple Annie (May Robson) is a pathetic, nearly destitute alcoholic but outwardly a warm and cheerful apple seller plying her trade near Times Square. One of her regular customers is Dave the Dude (Warren William), a soft-hearted gentleman gangster who firmly believes Annie's apples bring him good luck - he won't make any major business transactions or high-stakes bets without one.

Annie, meanwhile, learns that her illegitimate daughter, Louise (Jean Parker), whom Annie shipped off to a Spanish convent as an infant, is returning to New York accompanied by her fiancé, Carlos (Barry Norton), and his father, super-rich Count Romero (Walter Connolly).

Apoplectic Annie. For years she's been passing herself off to her daughter as society matron "E. Worthington Manville," writing letters on stationary pinched from the exclusive Hotel Marberry. Terrified that once her daughter and her suitor's father learn the truth, all will be in ruins, Annie goes on a bender.

Elsewhere, Dave the Dude, in the midst of a big deal, is so desperate to keep those lucky apples flowing that he's willing to finance an elaborate ruse to keep Apple Annie happy. He puts her up in a luxurious apartment at the Marberry, hires pool shark Henry D. Blake (Guy Kibbee) to impersonate her wealthy judge of a husband, and Dave's girl, Missouri Martin (Glenda Farrell), is put in charge of giving Annie a complete makeover. But will the deception work?

Lady for a Day is a delight, with several superb performances, funny dialogue, warm sentiment, a bit of pre-Code raciness, lovely cinematography, and on and on.

At its center is May Robson's performance. Capra clearly understood this; note how his camera rarely cuts away from her in close-up, even when a cutaway would normally be called for. He knows she's the heart of the film, that the audience is most invested in her character, and so keeps his camera locked on Robson as much as possible.

She undergoes an Eliza Doolittle-like transformation, from nearly homeless apple seller and drunk (who resembles and talks like Marjorie Main's Ma Kettle) dramatically transformed into an elegant lady courtesy of Missouri Martin's army of beauticians. Robson's portrayal of an alcoholic is realistic and raw, and her panic when Louise's letter about her engagement arrives is likewise authentically distressing, and these scenes are clearly a major influence on Bette Davis's later portrayal. The story goes that Capra first wanted Shirley Booth for the remake, but she declined on the grounds that no one could top Robson's performance. She was right.

Warren William, on loan from Warner Bros., is okay, but clearly an inferior choice to the star Capra originally lobbied for, William Powell, or the one he had hoped to get out of Columbia's loan-out arrangement with Warner Bros., James Cagney. (George Raft would have been good, too, but at the time he was under contract to Paramount, not Warner Bros.) In hindsight, Edward G. Robinson, another Warner star, might have been even better. William is a bit too erudite, too intellectual and wistful to be completely effective as Dave the Dude. For the remake, Capra wanted Frank Sinatra or Dean Martin but lucked out with the cast-against-type Glenn Ford. His relaxed, amused performance in the remake is one of Pocketful of Miracles few unqualified assets.

Around this time Capra was cramming his films with solid character stars and supporting players. Here, Guy Kibbee is a delight as the fake judge; his billiards scene with Connolly is brilliantly funny, despite the fact that it might very well have been written with W.C. Fields in mind. Though not remotely Latin, Connolly pulls off his role with great aplomb. Elsewhere, Halliwell Hobbes has several good scenes as Annie's English butler (speaking to one of Dave the Dude's inarticulate lackeys, "If I had choice of weapons with you, sir, I'd choose grammar!"), and as always Glenda Farrell is in top, wisecracking form.

There are funny little pre-Code moments throughout. Among the beauticians entering Annie's boudoir is a man. Dave the Dude: "Hey! He can't go in there!"

Considering that Lady for a Day isn't sourced from the original 1.37:1 black& white nitrate camera negative but rather from dupe elements, the picture quality is almost incredible. The Columbia Torch Lady has never looked so scintillating. The Blu-ray restores about four-and-a-half minutes of heretofore lost footage not included on an earlier DVD version of the film, including one key scene. Dust, scratches, missing frames and the like have been digitally repaired, though at several points a line or two of dialogue is mysterious missing; the actors mouth words the audience cannot hear. But overall the image is extremely rich and beautiful. One shot, of Louise and her fiancé filtered through glass with water from a fountain dribbling down it, is indescribably beautiful. The uncompressed PCM 2.0 mono is likewise impressive on this all-region disc. The only glaring omission is the absence of SDH English subtitle options.

Supplements include a brief on-camera introduction and audio commentary by Frank Capra, Jr., material produced for the earlier DVD version. (Capra Jr. died in 2007.) A former unit production manager and producer himself, Capra knew his way around the business and his commentary is more informative and interesting than most tracks featuring offspring of cast and crew. There's also a still gallery, a "before & after" restoration demonstration, and a brief but worthwhile booklet essay by Scott Eyman.

Lady for a Day is one of those releases easy to rave about. Pop some popcorn, gather the family, and get lost in 96 minutes of classical Hollywood moviemaking at its best. A DVD Talk Collector Series title.