''Adventure Time'': It Came From the Nightosphere 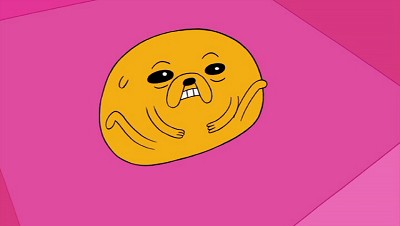 With a show like "Adventure Time," there's no middle ground. The viewer must give themselves fully over to its addicting blend of non-sequiturs, goofball flights of fancy, and general weirdness, or go home. Perhaps that's the thinking behind episode collection DVDs like It Came From the Nightosphere, the second of the non-season DVDs that Cartoon Network and Warner Bros. have put out for the show. With a low retail price of around ten bucks, the disc will give newcomers a good taste of what the show is like.

For anyone unfamiliar, the show follows the exploits of Jake the Dog (John DiMaggio), who can morph and stretch his body into anything at will, and Finn the Human (Jeremy Shada), a young energetic kid with a sword and a bear hood, who go on adventures across the land of Ooo. Recurring characters also include Princess Bubblegum (Hynden Walch), Marceline the Vampire Queen (Olivia Olson), video game machine Beemo (Niki Yang), Lady Rainicorn (Yang again), and Lumpy Space Princess (series creator Pendleton Ward).

The collection is titled for the Emmy-nominated episode "It Came From the Nightosphere," which is a pretty decent example of all the notes the show can hit. After Marceline sings a sad song (about French fries) that reveals her conflicted relationship with her father, Jake reunites them, only to have Marceline's Dad selfishly steal Marceline's guitar and go rampaging across the countryside sucking people's souls out. The rift between Marceline and her dad is handled with a nice seriousness that fits right in alongside absurd gags about penguins, and any episode that includes a song is a plus in my book. The episode is followed by "Rainy Day Daydream," another great example of the show's imagination, and not just because the episode is literally about imagination. Finn and Jake are forced to stay inside during a knife storm, and end up having to fight off Jake's overactive imagination, which turns the floor into hot lava and fills the rooms with monsters. It would be easy to simply illustrate all the things Jake is imagining, but the animators take it in the opposite direction, which is much funnier. 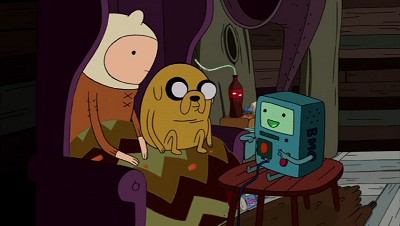 The knife storm gag is also one of the show's brilliant throwaway jokes that brings the viewer's imagination to life as well (it is exactly what it sounds like). Other highlights include "Memory of a Memory," with Jake and Finn jumping into Marceline's memories, "The Creeps," in which Jake and Finn attend a Halloween-like costume party, complete with hysterical fake names, although I'm partial to the Jake-centric "Power Animal" and "Crystals Have Power." Both achieve a perfect level of absurdity, and the latter has some of the show's silliest Jake animations.

Many of the episodes included in this set are from Seasons 2 and 3 of the show, but the few Season 1 episodes sprinkled into the mix give a good idea of how far the show has come since its first episodes. The most primitive of the early episodes is "The Enchiridion!", which, while perfectly entertaining, has a sense of being locked to a traditional story structure that later episodes have none of. Then again, maybe that's just an anomaly; the show's very first episode, "Slumber Party Panic," is also presented here, and doesn't feel as anchored.

As a collection, there's no real theme or connection between these episodes, although there seems to have been some effort between the two DVDs to make sure any of the show's few serialized story points should be covered for anyone that watches "My Two Favorite People" and then this disc; for instance, this collection's episodes "Mystery Train" and "The Creeps" go together, and the setup for a joke in "Memory of a Memory" occurs in "It Came From the Nightosphere"). That collection also has the introduction of Marceline, which is not included here. 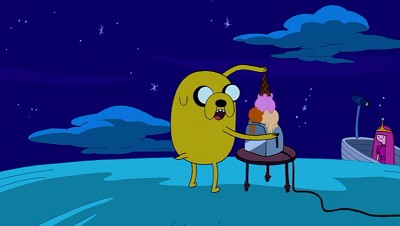 The total runtime of the collection is 178 minutes, although that includes the show's opening and closing credits for every one of the sixteen episodes. (It's also a little bit distracting to anyone waiting for season sets that the credits are designed to cover a block of two episodes each, so viewers with eagle eyes will notice credits for characters that don't actually appear.)

Episodes: "It Came From the Nightosphere," "Rainy Day Daydream," "Wizard," "Power Animal," "The Enchiridion!," "Slumber Party Panic," "The Real You," "Memory of a Memory," "Prisoners of Love," "Cyrstals Have Power," "Business Time," "Mystery Train," "Guardians of Sunshine," "The Monster," "Hitman," "The Creeps."

The DVD
The artwork for "It Came From the Nightosphere" is a great deal simpler than the artwork for the previous DVD, but it's amusing on closer inspection, with Finn, the show logo, and Beemo squished into Jake's body. The only slightly unusual part about the artwork is the fact that the collection title isn't written on the front cover (the cloud in the Amazon image is a sticker, although the title does appear on the spine). The disc comes in a standard (non-eco) white Amaray case, and there is an insert advertising "Regular Show" on one side and the previous "Adventure Time" DVD on the other. 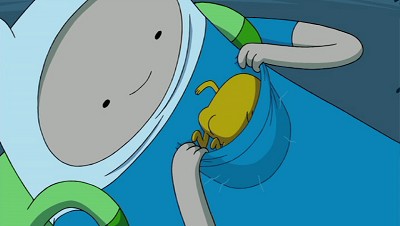 The Video and Audio Haloing and aliasing are the two issues with this 1.78:1 anamorphic widescreen transfer. Colors are bright and vivid, but the occasional jagged edge (significantly less than an animated show that is done digitally, but still occasionally present) and slightly garish edges do stand out. Meanwhile, the inclusion of only a Dolby Digital 2.0 audio track feels like it's selling the show short, given all of the musical numbers and weird action sequences that occur (admittedly, not as much singing on this disc as I would've liked), but I have no idea if the show is presented anywhere in 5.1. English captions for the deaf and hard of hearing are also provided.

Conclusion
The only issue with "It Came From the Nightosphere" is that once again, it is not a Season 1, 2, or 3 release of "Adventure Time." Anyone unfamiliar with the show might like the opportunity to try it out before investing in a whole season down the line, but existing fans will be less pleased. Truthfully, I was actually going to put down a "recommended" rating just on the basis of the show itself and the potential appeal of the disc to newcomers, but just today (!), the official Frederator blog mentioned that Season One is definitely on the slate for later this year. With the potential buyers for this release slimmed even further, I'm going to drop down to a rent it.