Film interpretations of historical figures can sometimes be a dicey proposition, particularly when the figure is a notoriously secretive and even mysterious one such as former FBI head J. Edgar Hoover. When one is dealt with approaching such a personally clandestine figure, there are additional challenges that are involved, such as perhaps attempting to humanize the subject, or trying to put into context how an event (or events) shaped his life. Sometimes it works, and other times, well, we have J. Edgar released upon the masses.

The film is certainly not devoid of star power or gravitas. Dustin Lance Black (Milk) wrote the screenplay that Clint Eastwood (Invictus) directed. Leonardo DiCaprio (The Basketball Diaries) plays the title role, and as Hoover the film strolls through the early years of his life in flashbacks and shows us near the end of his life. Some of his notable events are covered, such as his rise to power within the FBI and his work on the abduction case of Charles Lindbergh's infant child. His friendship with longtime assistant Helen Grandy (Naomi Watts, Fair Game) is touched upon, along with the relationship he shared with rumored lover Clyde Tolson (Armie Hammer, The Social Network). The film also spends time Hoover's relationship with his mother (Judi Dench, Casino Royale), possibly hinting that this may be the reason for his alleged cross-dressing habits. 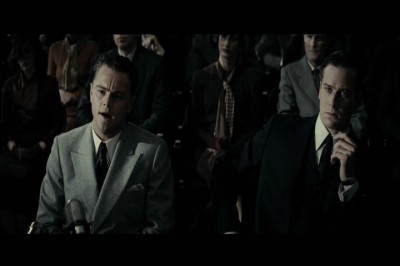 The biggest flaw within J. Edgar appears to be with a story whose ambitions do not match with the existing realities, resulting in a story that is hackneyed in approach and execution. Hoover is recounting the stories of the Bureau's origins to various secretaries through the years to help aid in the flashback material, a tactic that is seemingly handed down from generation to generation. When we do come back to the present day for the film, the prosthetics that DiCaprio, Watts and particularly Hammer wear to convey the years on their faces are a shock, only to become laughable. Each is being asked to portray someone who is more than double (and in Hammer's case, almost triple) their actual age. Through the story, Black tries to convey Hoover's deeply conflicted personal life with a strident professional one, yet does not spend enough time on one or another long enough and apparently Eastwood hopes that DiCaprio's expressions communicate this. Sometimes they work, but those moments are few and far between. And when they try to handle the poignant moments within the film (there are two late ones), the film's storytelling has gotten so sideways they are not emotional whatsoever. You almost have to chuckle at them because it is as if Eastwood and Black were just checking off another item on the list of things to touch on about Hoover, and that detachment can be easily sensed when watching.

Along those lines, DiCaprio's performance tends to resemble some of the incomplete nature of Black's screenplay. He emotes the personal conflict well and the professional dilemmas are also communicated nicely. The interplay he shares with Hammer is intriguing as the two relay the vague nature of their relationship well in the film, and Hammer's performance in general is very good. He does not get as much time to relay the good public face with the tortured private one that Hoover has, but then again, he does not feel a need to. Of the above the title performers, he may be the best of the bunch. Watts and Dench are simply not given enough time to show their skills, and even in a late moment when Hoover shows some vulnerability to Grandy, it is nice but hardly memorable. 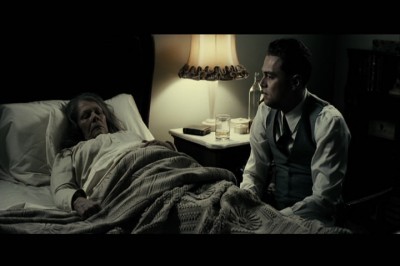 Ultimately, J.Edgar brought a wealth of acting resources to bear but they were either mismanaged or simply lost in a story written on a mysterious subject by someone who might have claimed to know about Hoover's motivations. The inspiration for the story failed at the basic task and thus, we are left asking more questions about Hoover and Tolson then finding out anything worthwhile emotionally about him in the film. Perhaps more information about Hoover will come out and in such time history will help clear up any leftover trivia about him, but the film does not make things any easier with this shoddy interpretation.


Warner trots out J. Edgar in an AVC encoded 2.40:1 widescreen high-definition presentation that is very good, if not consistent with similar looking films from Eastwood and cinematographer/longtime Eastwood collaborator Tom Stern. Vibrant colors when present are somewhat muted, and the palette is dominated by greens, browns and black, the latter of which is deep and maintains this during the film. Image detail in the foreground and background is better than average, with the computer-generated backgrounds looking pretty convincing against the Virginia locations. The presentation does tend to enhance the silliness of the character's elderly makeup (particularly Hammer's), but there is nothing you can really do about it now.


One would assume initially that a DTS-HD Master Audio 5.1 lossless surround track for a biopic would be a wasted effort, but there is a lot going on in the listening field during the film. One of the first things is a bomb blast that rips through all of the channels with clarity and lets the subwoofer know not to take anything for granted. Even on smaller sequences, door knocking can be heard in the rear channels and panning is evident and effective. Dialogue is well-balanced and consistent through the film, and the score provides a gentle underlying blanket of sound which is clean as well. Excellent listening material.


There are generally few extras on Eastwood-directed video titles, and this is no exception. The only extra is "The Most Powerful Man in the World" (18:10), a look at the man with thoughts from Black, Eastwood and various other members of the cast and crew, interspersed with newsreel film of the real Hoover. His propensity for file collection is discussed, along with his possible homosexuality, and remembrances on Grandy and Tolson as well. From a direction point of few there is not too much here that we have not already seen. A standard-definition disc is included as part of the package (and is where the images are taken for the review), and an Ultraviolet digital copy can be downloaded at your convenience.


J. Edgar might have started with good intentions and intrigue, but the events transpired haphazardly and include performances that are average for the most part, yet don't elevate what is a drab script. Technically the disc impresses yet fails on the bonus material side of things, and if you are looking for a good dramatic biopic about a corrupt political figure, Secret Honor may be the better way to go. As is, I would rent this, and do very little else past that.