Acorn Media // Unrated // March 6, 2012
List Price: $39.99 [Buy now and save at Amazon]
Review by Stuart Galbraith IV | posted February 28, 2012 | E-mail the Author
The DVD cover art for actress-turned-novelist and TV producer Lynda La Plante's Above Suspicion (2009-present), a British murder investigation-policier series, sells it on the basis of her greatest achievement: the Prime Suspect shows starring Helen Mirren. However, beyond the fact that Above Suspicion is nowhere near as good as that outstanding program, it's also practically a photostatic copy of another series La Plante produced between those two shows, namely Trial & Retribution (1997-2009). While that series, like the American Law & Order, partly dramatized the criminal prosecution of its suspects, the lion's share of its running times were devoted to murder investigations. In both that and this, a younger, less experienced but aspiring female Detective Inspector, a model-attractive redhead, investigates crimes with a much older, ruddier, male veteran Detective Chief Inspector. This hard-drinking, chain-smoking, manipulative and chauvinist boss recognizes the woman's talent, makes initially unwelcome advances that she, self-destructive in her personal life, eventually and recklessly succumbs to. Prime Suspect shares some of these elements as well, but if Above Suspicion had been written by somebody else, I've little doubt La Plante could easily have won a plagiarism suit against such shameless cribbing.

The most striking difference among these shows is the age of the actress playing the lead. Mirren was 46 when she began Prime Suspect. Kate Buffery, the first star of Trial & Retribution, was 40, and her replacement, Victoria Smurfit, took over at the age of 29. Kelly Reilly, star of Above Suspicion was 31, but her features and childlike voice suggest someone younger still.

Trial & Retribution began well, initially approaching the greatness of Prime Suspect in its early, Kate Buffery stories, but La Plante quickly wrote that show's characters into a basically irresolvable corner, and it quickly went downhill after that. Above Suspicion has even weaker writing and, surprisingly given La Plante's earlier successes, is highly derivative and clichéd when not exploitative and borderline tasteless. (The latter being an issue with La Plante's shows for some time.)

Above Suspicion - Set 1 features the first two limited series: the two-part, 150-minute Above Suspicion from 2009, and its 2010 follow-up, Above Suspicion - The Red Dahlia, a three-part show running 180 minutes. Both programs feature what by Acorn Media's usual standards a lot of extra features, including a 25-minute behind-the-scenes featurette for each mini-series. 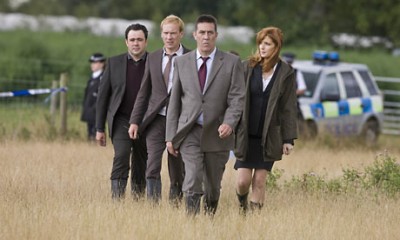 The first program suffers from an overwhelming sense of déjà vu, with rookie detective Anna Travis (Kelly Reilly, Mary Watson in the Downey/Law Sherlock Holmes films), the daughter of a recently deceased Old School copper and friend to Travis's new boss, DCI James Langton (Hinds, There Will Be Blood, Julius Caesar in Rome), making a bad impression her first day on the job. She shows up at a (muddy, naturally) crime scene in high heels, she pukes her guts out upon viewing the badly decomposed corpse, and her out-of-nowhere promotion and Victoria's Secret looks win her only resentment and suspicion within her office, especially by her emphatically Plain Jane female colleagues. Langton himself has a female boss who is also his secret lover. She's a stuffy, ice-cold credit hog. La Plante's heroines and supporting female characters may be empowered, but they're not very sympathetic.

(Spoilers) The first program is also hampered by a complete lack of mystery. It's all too obvious from the beginning who the murderer is partly because there are no other reasonable suspects. Further, the cat-and-mouse game rising British movie star Alan Daniels (Jason Durr) plays with Travis - he trying to woo her with his charm, fame, and money, while she tries to trip him up and build the foundation of a career on his high-profile arrest - is trite and not suspenseful, though Durr's performance is very good.

Indeed, the acting across the board almost wins Above Suspicion a pass. Reilly, for one, is excellent in spite of her striking good looks, or rather the fact that the script insists upon frequently titillating viewers by putting Travis in sexual situations and in scenes showing her in various states of undress or in glamorous and/or tight-fitting wardrobe.

The Red Dahlia is built around an even less promising idea, of a serial killer reenacting the infamous Black Dahlia murder in Los Angeles in January 1947. For starters, Black Dahlia spin-offs have proliferated in recent years, rivaling speculative fiction about Jack the Ripper. Secondly, it takes far too long for the investigation team to catch on to the obvious similarities, this despite the fact that the first victim is found horribly mutilated exactly like the "Black Dahlia," one of the most famous unsolved murders of the 20th century. Don't they teach these things in detective school?

Third, the episode lingers on real crime scene and autopsy photographs of the Black Dahlia herself, Elizabeth Short. This struck me as unforgivably exploitative, graphically intertwining a real if distant tragedy for what is basically an entertainment program. If the filmmakers felt they needed to show such images, they should have been recreated rather than exploit actual photographs of a real, mutilated corpse. It's as tasteless as the imitation Bruce Lee movies made after his death that, sometimes, would incorporate footage of Lee's funeral and even close-ups of the dead actor in his open casket.

More to the point, why would the killer want to reenact those crimes so precisely anyway? It's never adequately explained, especially when in hindsight such evidence only leads Travis and Langton directly to the killer's doorstep.

Further, where Prime Suspect dramatized the professional and personal life of a smart, empowered career woman who also suffers the same human frailties as everyone else, Above Suspicion's heroine - and indeed, even some of the victims in these two stories - frequently simply come off as unbelievably stupid. Most notably, in The Red Dahlia Travis absurdly becomes romantically involved with an ambitious newspaper reporter clearly only interesting in mining her (and the obligingly handy case files she leaves around for him to easily find) for a scoop.

Fortunately, The Red Dahlia, weak as it is, is actually the more entertaining of the two, if only for its crudely audacious but effectively intriguing chief suspect. As with the first show (which cast Jason Durr against type), The Red Dahlia's chief suspect is a wealthy patriarch played by Simon Williams, the tragic James Bellamy from Upstairs, Downstairs. As with Durr, Williams really sinks his teeth into the part and is so oily and unpleasant it's hard not to root for Travis and Langton to nail the bastard.

Above Suspicion - Set 1 looks quite nice in its 16:9 enhanced, 11.78:1 presentation, up to contemporary television standards. Colors are rich and the detail is impressive. Each story gets its own dual-layered, single-sided disc. The Dolby Digital Stereo is likewise fine and accompanied by optional SDH English subtitles.

Supplements include photo galleries and two behind-the-scenes featurettes, running 23 and 28 minutes respectively, as well as cast interviews adding another four minutes to the total.

Above Suspicion - Set 1 is disappointing though still mildly entertaining, even though its weaknesses are many and obvious. Recommended.