Universal // Unrated // April 17, 2012 // Region 0
List Price: $39.98 [Buy now and save at Amazon]
Review by Stuart Galbraith IV | posted April 21, 2012 | E-mail the Author
As part of its 100th Anniversary Collector's Series of Blu-ray titles, Universal is releasing Buck Privates (1941), Abbott & Costello's first starring feature, and the movie that fueled their rocket-like ascent to the top of the box office heap in the early 1940s. Spurred by the peacetime draft in the year preceding the Japanese attack on Pearl Harbor, Buck Privates is a truly bizarre propaganda musical, undoubtedly effective in its day, while as a comedy it's all aces. Briskly paced and supported by atypically fine musical sequences and a hoary but inoffensive romantic subplot, it integrates and captures well some of Abbott & Costello's funniest Burlesque routines. It's one of their best and most imitated films (e.g., You're in the Army Now, Great Guns, At War with the Army).

And yet, for the money, Universal's Blu-ray is, with its $39.98 SRP, obscenely overpriced. The transfer, hyped on the packaging as "Perfect Hi-Def Picture, Perfect Hi-Def Sound," actually varies quite a bit from reel-to-reel, from fairly impressive to just so-so. Bonus features include only recycled extras from past DVDs plus Universal promo material having little or nothing to do with Buck Privates. The high price mainly seems to be offsetting the cost of its lavishly produced, full-color booklet, which runs about 50 graphic-intensive pages. The booklet is beautifully designed with much worthwhile material, but for many it won't justify the added expense.

Unfathomably, Bob Furmanek and Ron Palumbo's audio commentary for Buck Privates, included on the Abbott and Costello: The Complete Universal Pictures Collection but nowhere else, isn't included here. There may be legal reasons for this, but if not then somebody really messed up. For fans that fact-filled commentary track is probably a bigger draw than the booklet, which I suspect many will glance through once and never peruse again. (Most of the booklet's text appears cribbed from Furmanek & Palumbo's definitive book Abbott and Costello in Hollywood.)

The larger issue though is, why Buck Privates? Yes, it's one of Abbott & Costello's best movies, but even if the high-def transfer had been visually spectacular it can't hide the fact that Buck Privates is a flat and dull-looking movie. The infinitely moodier Abbott & Costello Meet Frankenstein or maybe Hold That Ghost would have offered a lot more visual interest. And, for the price, I think Universal should at the very least have included the sequel, Buck Privates Come Home (1947), or perhaps one or more of their other service comedies: In the Navy (1941) or Keep 'Em Flying (1942). Two or three movies for forty bucks begins to sound a little more reasonable. 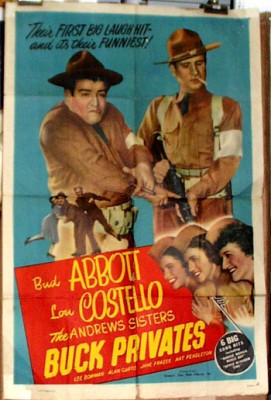 A few yards away, shameless millionaire playboy Randolph Parker III is confident his rich, influential father will pull strings and get him out of this silly old draft business. However, Bob Martin (Alan Curtis), Randolph's long-suffering valet, is only too happy to serve.

Both fall for the same girl, Judy Gray (Jane Frazee), who's working as a "camp hostess" ("a new thing the Army's trying") along with the Andrews Sisters (themselves). Meanwhile, Slicker and Herbie are horrified to discover that not only has Sgt. Collins joined the army as well, he's now their drill instructor, and determined to get even!

Despite its dated propaganda elements and obvious romantic subplot, Buck Privates is among the few Abbott & Costello movies one could show to non-fans and, in the right setting, they'd probably find it pretty funny. Though they were showcased in One Night in the Tropics, Buck Privates was really the team's big break, and they take full advantage. Not yet overworked, overindulged comedians bored with making pictures, in Buck Privates Abbott & Costello are bursting with an obvious enthusiasm and energy that pretty quickly evaporated, even as early as 1945.

Several of their funniest routines, including "Dice Game," "Go Ahead and Sing", "You're 40, She's 10," and best of all, the "Drill" routine, are done to perfection, aided in no small way by clever editing combining the best bits from several takes and carefully timed to draw out longer, more sustained laughs than the team was used to on stage and radio. Reportedly they were amazed by effective way their routines were cut together.

Veteran character actor Nat Pendleton's career was already winding down, but he made a great foil for Lou especially; it's almost criminal they were reunited for Buck Privates Come Home but no other films. I wonder why?

Lee Bowman, Alan Curtis, and Jane Frazee were fairly minor actors, though effective in their parts. Bowman is especially good; one really wants to punch him in the nose, as Curtis's character does.

The Andrews Sisters - Laverne, Maxene, and Patty - are little fireballs of energy, famously singing "Boogie Woogie Bugle Boy," a song written especially for the film. They would appear in two more of Abbott & Costello's movies, but as here mostly are in for musical relief; a shame they're not better integrated into the story.

Indeed, all of the musical numbers are good, including the catchy "You're a Lucky Fellow Mr. Smith." ("You're a lucky fellow, Mr. Smith / To be able to live as you do / And to have that swell Miss Liberty gal / Carrying the torch for you...") These patriotic numbers and blithely unaware draftees dancing off to an imminent war are in hindsight almost alarmingly naïve. Camp hostesses are everywhere, doling out candy and smokes ("Cigarette, soldier?"), raring to dance the Boogie Woogie or take a romantic stroll down among the apple blossoms. There's training to be done, yes, but the war games are bloodless fun, and a chance to earn some easy money betting against Company C. One almost expects a ghoulish, American Graffiti-type coda at the end: Herbie Brown died of wounds sustained on Omaha Beach; Randolph Parker III, on a liaison assignment with the Navy, was aboard the USS Arizona on December 7, 1941; The Andrews Sisters went on to sell 75 million records, etc.

Made for less than $250,000, a pittance given the number of extras, musical numbers, and scale of its story, Buck Privates was a colossal hit, grossing $4 million, or about 16 times its cost, this at a time ticket prices averaged around 25 cents.

Presented in 1080p high-def on a BD-50 and in its original 1.37:1 aspect ratio (listed as 1.33:1 on the packaging), the black and white Buck Privates looks okay, about par with the Universal Sherlock Holmes movies released to Blu-ray by MPI a while back, but not nearly as good as, say, Warner Bros.' Casablanca. The image is clearly sharp for most of the picture, there's a definite bump upwards in terms of clarity and contrast, and the presentation looks more film-like and with minimal DNR (strangely, more apparent during dissolves and other opticals). The reel that includes the drill routine is by far the weakest, looks most like SD-DVD, and probably sources second-generation dupe material. The DTS-HD Master Audio (2.0 mono) sounds fine, and includes optional English SDH, Spanish, and French subtitles.

Disappointing. The Furmanek/Palumbo audio commentary heard on the Abbott and Costello: The Complete Universal Pictures Collection is missing, and what's included is either recycled or irrelevant. "Abbott and Costello Meet Jerry Seinfeld" is a well-intentioned but very poorly done television special that through awesomely bad editing of clips manages to completely destroy everything appealing about the team. A previously released trailer, in poor condition and in standard-def, is included, along with three new featurettes that play more like extended promo films: "100 Years of Universal: Restoring the Classics," "The Carl Laemmle Era" (of which Abbott & Costello missed entirely), and "Unforgettable Characters." Ah, well. At least the high-def clips from Dracula (1931) look good.

The booklet is another story, including as it does an introduction by director John Landis, a three-page history putting the team into context, short bios of the cast and crew, a cue sheet, transcripts of several of the movie's classic routines, pressbook excerpts and ad mats, a short bit about the sequel and other bits of trivia scattered throughout.

Even without the booklet but with the commentary, if Universal was selling this for $9.98 instead of $39.98, or if it had included at least one other Abbott & Costello title, also in high-def to make it a double feature, I'd be much more inclined to recommend this. But, as is, my advice is to Rent It.