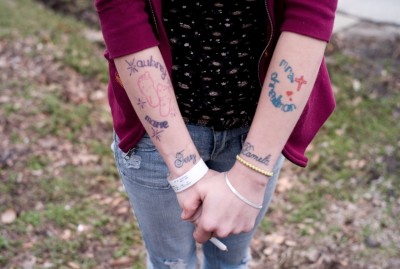 At this point, it's probably safe to say that the case of the West Memphis Three has been covered, documentary-wise. It first came to national attention back in 1996, when filmmakers Joe Berlinger and Bruce Sinofsky made Paradise Lost, a riveting documentary account of the murders of three little boys in West Memphis, Arkansas, and how three teenagers were accused--wrongfully, it seemed--and convicted of the crimes. Berlinger and Sinofsky returned to the story in 2000 for Paradise Lost: Revelations, and then again just last year; their third film, Paradise Lost 3: Purgatory was complete when the story finally came to a (relatively) satisfactory conclusion, prompting the addition of an epilogue. Between the three Berlinger/Sinofsky films, a total of seven-plus hours of documentary film has been made on the subject. What more is there to say?

To be fair, Amy Berg's West of Memphis does have things to add--some new bombshells, some new theories, and access to a few interesting parties (including WM3 member Damien Echols, who is credited as one of the film's producers). What's more, Berg's film played a part in the eventual release of Echols, Jason Baldwin, and Jesse Misskelley; producers Peter Jackson and Fran Walsh were among those who financed the ultimately vital DNA testing, and Berg appears to have set out to document that process. Those who are unfamiliar with the case may find its 150-minute running time less daunting than the sprawling trilogy that preceded it. But those who have seen the earlier films will find quite a bit of repetition here.

That being the case, it is probably most constructive to note what is new. Berg begins with the announcement, in 1993, of the arrests of Echols, Baldwin, and Misskelley; she then diligently reconstructs the timeline and presents the evidence and the trial without comment--taking the convictions at face value. It is only then, with what one researcher calls "the first crowd-sourced criminal investigation," that she goes back and digs in. The shady witnesses (two of which turn up here and admit perjuring themselves). Questions of the knowledge, and conclusions, of assistant medical examiner Dr. Frank Peretti. And the search for a more credible subject--one that first seemed to point to one of the boys' stepfathers, John Mark Byers, before landing on another, Terry Hobbs.

Ultimately, West of Memphis is very much about making the cast against Mr. Hobbs, and does so at greater length and depth than the third Paradise Lost film. Much of that investigation is done with the cooperation of his ex-wife Pam; she, along with prosecutor John Fogelman, Judge David Burnett, and juror Sharon French are among the interview subjects that Berg lands which eluded Berlinger and Sinfosky in their later films (presumably because, after their first effort, their intentions and advocacy were clear). Berg constructs this material as both investigative journalism and thriller, building a case methodically, complete with political obstruction ("There is no 'newly discovered evidence!'" Burnett insists) and eleventh-hour surprises (two very compelling new witnesses were apparently interviewed about a week before the film's Sundance premiere).

Berg is a talented filmmaker, as anyone who's seen her shattering Deliver Us From Evil knows, and she presents the material well--the editing is tight, the cinematography filled with evocative imagery of the Arkansas landscapes. She provides an intricately detailed examination of the logistics of their final plea, which is welcome, and stays with the moving statement of their final judge, which is beautifully illustrated and scored (the music is by Nick Cave and Warren Ellis). But at the end of the day, the picture is too reliant on footage we've already seen and things we already know. The second film to the marketplace always suffers in comparison (ask the makers of Infamous). If this were a story we weren't acquainted with, West of Memphis would be a real knockout. If only.