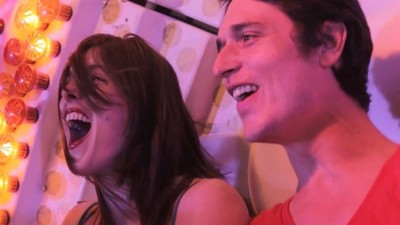 His name is Romeo. Hers, improbably, is Juliette. "So we're doomed to a terrible fate?" he asks, when they first meet. Well, perhaps. We can only presume so, since that meeting is a memory that Juliette (Valérie Donzelli) calls up while her child is going for a CAT scan. The juxtaposition is jarring, the way we're transitioned from the buzzing of the medical equipment to the sounds of punk music, from the brightly-lit hospital to a dim house party, from a worn mother to a young, single beauty. She has been through some things, and that's what Declaration of War is about.

She and Romeo (Jérémie Elkaïm) fall in love, as we can see from the young-lovers-frolicking montage that follows that first meeting. They have a baby, and after the glow of birth fades, they're deeply bewildered; their baby cries, all the time. "This kid is tyrannizing us," Romeo complains. (These scenes recall the early childhood sections of We Need to Talk About Kevin, forming a contraceptive double-feature if there ever was one.) They go to the doctor, but it's no big deal--they're feeding him too much. A couple of years pass. The child isn't walking, and he's vomiting a lot. There should be another easy fix, yes? There is not.

It is here that Declaration of War moves squarely from romance into domestic drama, and from that point on, it adroitly conveys the urgency that these parents feel, that keeps them up nights, as they attempt to first diagnose and then treat their son. It feels slice-of-life, at first glance, but it isn't; the filmmakers use pace, visuals and sound design to create, for the viewer, a genuinely stressful experience.

The leads, Donzelli and Elkaïm, wrote the script, and Donzelli directed. They also have a child together. One does not get the sense that this is a story drawn from thin air. It's an intimate picture; Donzelli goes in tight throughout their ordeal, focusing on the moment-to-moment details, the irritations, the logistics. It's all surprisingly gripping (strangely, since we pretty much know the outcome from the prologue), and immensely personal. Giant things happen in transitional voice-overs (delivered, in fine French New Wave style, by omniscient, third person narrators). What Donzelli and Elkaïm are interested in putting onscreen are little things.

They end up capturing swoony, vibrant moments, like a late night conversation on a hospital cot as they confess their fears to each other in hushed voices--fears that quickly take a turn towards gallows humor. That said, they don't shy away from the serious subject matter, particularly in those late scenes where they ask why, where they remember how good and easy things were before. Weren't they? These things always modify in memory, which is, when you think about it, much of what the film is about.

Donzelli shot Declaration of War using the HD video function of a Canon still camera, which helps it feel as light and off-the-cuff as it should. Some of her experiments don't work; there is a peculiar music break, for example, that pretty much stops the picture, the song and photography coming off as simply too corny and twee (one gets the feeling the pair have seen Magnolia too many times). That's a momentary distraction, though. Declaration of War is a modest film, but it sticks.