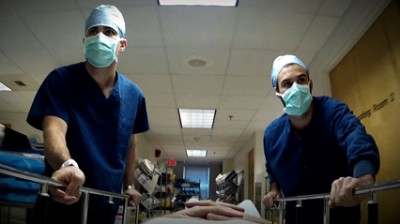 The term "escape fire," we're told, comes from the Mann Gulch fire of 1949, an out-of-control wildfire in Montana's Helena National Forest. Thirteen smoke-jumpers found themselves basically trying to outrun the blaze; one of them struck a match and burned an area of grass that he could then hide in, and which the wildfire would burn around. The story is told by Dr. Donald Berwick, as a metaphor for America's current healthcare system--an out-of-control catastrophe that could be avoided by simple solutions right in front of us. But that raging wildfire also serves as a metaphor for the healthcare crisis as a documentary topic. It's too big to be controlled, though the makers of the cumbersomely-titled Escape Fire: The Fight to Rescue American Healthcare give it their best shot.

Directors Susan Froemke and Matthew Heineman's thesis is simple: that what we're dealing with here is not a healthcare system, but a "disease management system," and a very profitable one. The status quo is so deeply entrenched that it's all but impossible to make it work in a sensible way; the "fee for service" system rewards doctors for doing more (procedures, X-rays, etc.), not for the quality of care or health of their patients. And drugs are the cure-all--we spend $300 billion a year on prescription medication, nearly as much as the rest of the world combined.

Escape Fire is stuffed with stats as shocking as that: the $2.7 trillion per year we spend on healthcare, that other developed countries spend $3,000 annually on healthcare per person to our $8,000. The system is set up to maximize profit--so, not to put too fine a point on it, the best patient is one that does not die but also does not get well. As Chris Rock noted, the money's not in cures, "it's in the medicine."

These are startling numbers and important points. But Froemke and Heineman also want to get in the even-steeper decline in quality of care in the U.S. military; the politics of food subsidies; rises in obesity and issues of affordability in eating right; the story of Wendell Potter, former head of communications for insurance giant CIGNA, who had a "crisis of conscience" and became an outspoken critic of the insurance industry; the tale of Avandia, the hot-selling diabetes drug whose manufacturer ignored an increased risk of heart attack among trial patients; the viability of alternative medicine; how Safeway implemented a system of insurance incentives for healthy lifestyles; and the personal story of Dr. Erin Martin, a family practitioner fighting the battle of personal care vs. "productivity."

It's a lot for the filmmakers to put on their plate, and the resulting film is--unavoidably, it would seem--somewhat rambling and unfocused. There's just too much to get into; the military stuff alone could sustain an entire feature, and here it seems like a diversion, one more thing to get to and then get back to. It doesn't help that the picture is constructed in an episodic, vignette-heavy style, which allows the filmmakers to cover more ground, but does the picture's momentum no favors.

Escape Fire: The Fight to Rescue American Healthcare ends with the most harmful after-effect of An Inconvenient Truth's success: the on-screen text as call to arms, an on-the-nose directive reading "We can change our healthcare system... but not until we change the conversation." The sloganeering may be inelegant, but the point is well taken. This is an important issue, and the filmmakers' passion is admirable. Their documentary is valuable, if damaged somewhat by its surplus of ambition.