Something from Nothing: The Art of Rap 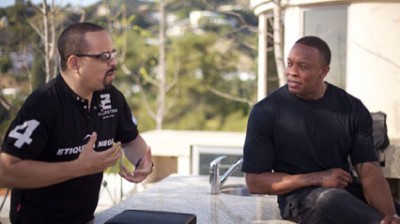 Ice-T is credited as director and executive producer of Something from Nothing: The Art of Rap, but he's also (in effect) the tour guide, serving as on-camera interviewer and off-camera narrator (his thoughts are laid over shots of the rapper/actor strolling cityscapes, framed like an action hero). When he talks to his subjects, the grandfathers and modern masters of hip-hop, he's the cool guy having an interesting conversation; the casual dialogues recall the Fab 5 Freddy-hosted interview segments on Yo! MTV Raps. The trouble is, the film never accumulates into a cohesive documentary whole--it's like watching 106 minutes of those Yo! segments, back to back to back, with both the pleasures and limitations you'd expect.

Don't get me wrong--the film's got some great clips, and (unsurprisingly) a muscular soundtrack, the filmmakers assembling what amounts to Hip-Hop's Greatest Hits to illustrate the proceedings. What's more, Ice-T and co-director Andy Baybutt show a real flair for marrying images and sound; the music breaks are illustrated by city B-roll, all shot with blown-out, urban-flavored hot cinematography. Hip-hop is, more often than not, the sound of the city, and these little interludes are stylish and alive.

Wow, you might think, that's a lot of people to get into one movie, and you'd be right--most get a couple of minutes screen time, tops. What's more, our journey through hip-hop is suspiciously Coast-centric; Ice-T spends the first half or so in New York, makes a brief stop in Detroit to talk with Eminem, and then goes to Los Angeles. Wait, no Atlanta? No New Orleans or Florida?

And there you have the problem: at this point in its history, hip-hop is just too big for a documentary of this length to be anything resembling definitive. The history is so rich and the personalities so colorful that, in spite of the relative brevity of its existence, we need something along the lines of Ken Burns's Jazz or Scorsese's The Blues.

So Something From Nothing: The Art of Rap is a survey, which is certainly welcome. But a few unfortunate choices in the editing room cause the film to miss its punch. The editing in the interview segments is heavy on grainy extreme close-ups, which are cut in with a frequency that calls too much attention to them. Nearly every subject delivers anywhere from a few seconds to a couple of minutes of straight-into-camera rhyming, and a little of it goes a long way; I get wanting to include the art, but these self-conscious interludes do little that the well-chosen vintage cuts don't. More pressingly, the documentary settles into a structural formula early on--a rap-into-camera verse from each performer, followed by a brief snippet of interview, then a record and B-roll and on to the next special guest--that gets wearingly repetitious fast. It becomes clear that, contrary to the boldness of his opening voice-over, the director/star isn't really looking to explore themes or examine the art at any kind of length; by the end of the film, he's just showing off his Rolodex.

There are some good stories (Chuck D wrote Fear of a Black Planet while "listening to a lot of Sly and the Family Stone"), compelling insights (Eminem sees the writing process as the assembling of a puzzle), welcome history (KRS-One's story about the origination of the "dozens" was new to me), and hilarious errors (no, Snoop, Bruce Lee did not "create" Taekwondo). The music is wonderful, and the look is impeccable. But Something From Nothing: The Art of Rap is too imprecise a film to give its important subject the treatment it deserves.