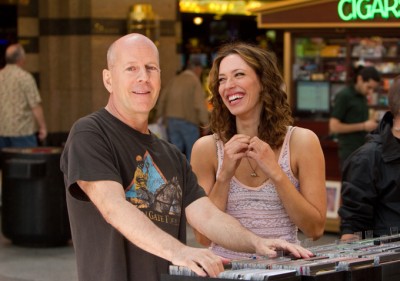 Stephen Frears is a filmmaker who seldom gets the kind of accolades he should, and that may very well be because he's a journeyman director in the classic mold. Like Howard Hawks or John Ford, he's adept at moving between genres and styles, from neo-noir (The Grifters) to romantic comedy (High Fidelty) to costume drama (Dangerous Liaisons) to Hitchcockian thriller (Dirty Pretty Things); because he's never been locked in to a specific type of film, he doesn't get the attention of, say, a one-trick pony like Tim Burton. Since he can move so easily between styles, one would think him particularly adept at combining them within one picture. But his previous effort, Tamara Drewe, fumbled uneasily between comedy and drama, and his latest film, Lay the Favorite, integrates them with even less success. It is, frankly speaking, a bit of a mess.

And yet, you should see it, for one simple reason: Rebecca Hall. Her performance takes a bit of getting used to; as Beth Raymer, a good-hearted "private dancer" who moves to Las Vegas with dreams of cocktail waitressing, she uses a high-pitched, drippy voice, which raises an immediate red flag. Is this gifted actress, so adroit at playing very smart (see Vicky Cristina Barcelona, The Town, Frost/Nixon), going to stoop to playing dumb? Not so much, it turns out; Beth is not a dumb broad role, but a classic dizzy dame, and though nothing in her previous filmography would suggest it, Hall proves an unexpectedly smashing screwball comedienne. She's a joy to watch, harnessing an unforced exuberance (and witty sensuality), so present in even the most ridiculous moments that we find ourselves watching her even when she's not the center of attention.

Bruce Willis co-stars as Dink, the professional sports bettor who becomes both her mentor and the object of her desire, and he's good too--it's a grizzled, relaxed, lived-in performance, and their chemistry is off the charts. As his jealous wife, Catherine Zeta-Jones does little with a nothing role, and poor Joshua Jackson gets the very embodiment of the dull, vanilla boyfriend role. But Vince Vaughn gives the movie a shot of his high-strung comic energy in the back half.

The movie's main difficulty is its uneasy tone. In the first act, Frears seems to be going for broad comedy, and that's certainly where Hall's bubbly performance is the best fit. But he can't sustain the sudden turns towards relationship-minded drama in D.V. DeVincentis's screenplay (based on Raymer's memoir); the rest of the movie is just too silly for us to suddenly take these characters with the required degree of seriousness.

Lay the Favorite plays fine as a light comedy, and if Frears and DeVincentis had sustained the comic ingenuity of the early scenes, the bouncy, Get Shorty-style vibe, they'd have come up with a much smoother and more fulfilling picture--no masterpiece, mind you, but a good time. As it stands, the picture keeps losing its thread, zigzagging between fizzy comedy and mucked-up melodrama. Still, Rebecca Hall. If Lay the Favorite accomplishes nothing else, it's compelling evidence that this is an actor who's capable of just about anything.