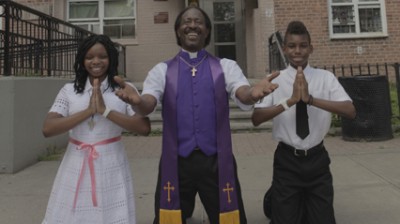 Spike Lee shot his first feature film, She's Gotta Have It, over 12 days in 1986. He shot his latest, Red Hook Summer, in just a week more, self-financing the low-budget picture and using a crew comprised partially of his NYU film school students. It is filled with whispers of his other works--not just in Lee's brief reprisal of his "Mookie" role from Do the Right Thing, or She's Gotta Have It's Tracy Camilla Johns popping up as "Mother Darling" (apparently, Nola became a Jehovah's Witness sometime in the last 25 years), but the thematic echoes of Crooklyn (a child's-eye view of urban life), Jungle Fever (with its bible-thumping patriarch), and particularly Do the Right Thing (tensions boil in summertime Brooklyn--racial in that film, religious in this one).

This is not to imply that Lee is just spinning his wheels here, but to make clear that Red Hook Summer is part of a body of work, a growing filmography preoccupied with certain places and ideas. Like most of his films, Lee's latest is flawed--deeply, in many ways. But his errors are never due to a lack of ambition, or a fear of failure. This is not a great film. But it is an interesting one, and it has moments of greatness.

He tells the story of a young man from Atlanta (Jules Brown), a young would-be filmmaker nicknamed "Flik" (it's not much of a reach to imagine him a stand-in for Lee, who hails from ATL). His mother sends him to spend the summer in Red Hook, Brooklyn, with her estranged father, a Baptist preacher named Enoch (Clarke Peters). Flik and his grandfather are immediately at odds; the older man expects him to work at the church and attend services every Sunday, and Flik is interested in neither. At his first Sunday service, the preacher announces that "there's someone in this room who needs Jesus in his life," and plants himself in front of Flik, his arms raised, his eyes closed. The young man doesn't budge. It becomes a battle of wills, Enoch's pietism only driving Flik further into indifference.

The early sections of the film are its least accomplished. Lee takes his time setting the scene (the picture runs a leisurely 130 minutes), but he dawdles too much, and most of his actors have trouble picking up the slack. Peters, the towering performer best known for his work as Lester Freamon on The Wire, is convincing in both the quiet scenes and his fire-and-brimstone sermons, where he shows the rhythms and theatricality of a real "preacher man." But Lee regular Thomas Jefferson Byrd spends too much time chewing on his lines, and young Brown, God bless him, simply doesn't engage us; his readings are too wooden, betraying lines memorized and dutifully recited. Toni Lysaith fares somewhat better as his only friend, church girl Chazz; she's got real verve and charisma, though her big monologue (which comes right out of nowhere) plays as forced as it surely is.

Lee's instincts fail occasionally, his pacing often slack, his polemical dialogue (he co-wrote the script with his Miracle at St. Anna collaborator James McBride) frequently getting away from him. There are some interesting ideas, for example, in Enoch's long talk with Chazz's mother, "Sister Shirley," but it's all soap-boxing; in his better films, the big hypotheses are at least greased into the conversations more convincingly. And as captivating as Peters is, and as actively as they are photographed by cinematographer Kerwin Devonish, there's just too many of the Sunday morning sermon scenes.

Much of the film pivots on a third-act reveal, which I won't spoil here, but which has already sharply divided viewers. The direction Lee goes in simply won't play for some audiences--it's both risky and more than a little derivative (some shots and cuts seem to deliberately recall Do the Right Thing). But it worked for this viewer. The turn sharpens the filmmaker's focus, harnessing his considerable directorial power and sense of rabble-rousing (and it's an impressive fake-out; the picture seems poised to move into Tyler Perry/Jesus Saves territory). There's real power in these closing scenes, and ignoring or minimizing that quality in the face of the picture's earlier fumbles is plain dishonest. Then again, so is glossing over those flaws and allowing the strength of its final passages to carry the day. What I'm getting at is this: Red Hook Summer is something of a contradiction. Or, in other words, it's a new Spike Lee Joint.