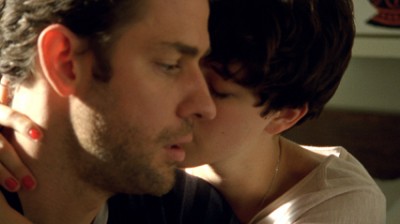 Peter (John Krasinski) and Julie (Rosemary DeWitt) have a comfortable, seemingly idyllic marriage. He's a sound designer for the movies; she's a therapist. But, as he notes in a key moment, "marriage is complicated," and sometimes a comfortable relationship means that those engaged in it are susceptible to an outside spark. In that situation, Martine (Olivia Thirlby), the hot 23-year-old artist from New York, is like a lit firecracker thrown into a slow gas leak.

Her arrival, and the trouble it causes, is the subject of Ry Russo-Young's Nobody Walks, a small-scale relationship drama about smart people making all sorts of bad decisions. Julie, for example, has a temptation of her own to deal with: one of her patients is a successful screenwriter (Justin Kirk) who has stopped hiding that he's got the hots for her. (Kirk's performance raises a significant question: why isn't he a major movie star yet? Seriously, people, what are we waiting for here?) Martine has eyes for Peter's handsome assistant David (Rhys Wakefield), but she might have a thing for Peter himself, particularly after a foley recording session that turns unexpectedly sexy. Julie's daughter Kolt (India Ennenga, from Treme) harbors a huge crush on David, though he's several years her senior--as is her Italian tutor (Emanuele Secci), who keeps asking creepy questions in that foreign tongue.

Russo-Young co-wrote the screenplay with Tiny Furniture scribe Lena Dunham, and her film (like that one) seems to take an almost perverse delight in pivoting comic situations ever-so-slightly into awful ones, and vice versa. Their primary divergence as directors is in the proximity of the camera; in contrast to Dunham's long, wide shots, Russo-Young shoots in tight, almost uncomfortably close to her characters. The situations are so well-prepared that she can do that without leaving the actors exposed--she winds the characters up slowly and points them at each other, then waits for the inevitable collisions.

Her actors put their trust in her, and come off well. Thirlby (sporting a distractingly bad haircut) avoids countless clichés nimbly, playing Martine as neither an innocent nor a libertine, merely an impulsive young woman who hasn't quite figured out how to navigate her daily existence. Krasinski, in the compulsory sitcom-guy-does-an-indie-flick beard, portrays Peter as a nice guy who's capable of infinite pettiness; this is a movie that understands how the most jealous people are often those least entitled to that emotion. And DeWitt is a marvel--watch how the camera holds on her face as she registers seeing something she shouldn't have, and then her subsequent physical response when she does something she shouldn't have.

Some have complained that Nobody Walks doesn't go anywhere, and it's true that its narrative doesn't follow the expected discovery/blow-up/lesson learned schematic. This is one of its most commendable qualities. Sometimes things happen, and people don't yell and scream and throw things--they deal with them, and then they press on. Russo-Young and Dunham understand this, and plenty more besides. This is a modest movie, but a refreshingly honest one.