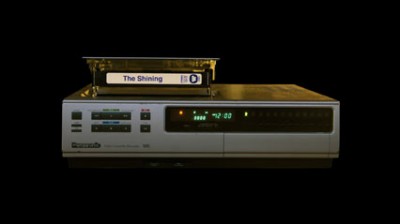 People get worked up about Stanley Kubrick. There may be no filmmaker whose work has been more intensely hyper-analyzed; reams of paper and acres of cyberspace have been used to ponder the ending of 2001, the violence of A Clockwork Orange, the morality of Lolita. Yet some of the strangest and most intricate close-readings of his work have been attached to his most seemingly straightforward project: the 1980 film adaptation of The Shining. To the casual observer, the film seems a genre piece, the intellectual aesthete trying his hand at horror. But a few decidedly non-casual observers, theorists and critics and the like, see all kind of precise subtext luring within The Shining, and Rodney Ascher's ingenious montage documentary Room 237 (subtitled "Being an inquiry into The Shining in 9 parts") gives them the opportunity to take their theories for a spin. The result is a brainy blast, a witty and frisky documentary that is, incidentally, a cinephile's dream.

The idea at its heart is that Kubrick was a puzzle-maker, a notorious perfectionist who attended to every detail, from production design to props to costumes to photography, and that therefore nothing in his films "can be taken as arbitrary." Thus, to Room 237's five interview subjects (Bill Blakemore, Juli Kerns, Jay Weidner, Geoffrey Cocks, and John Fell Ryan), people who have put this movie through the microscope, it is a film full of hidden messages and smuggled theses, a film about much more than the caretaker of an isolated hotel losing his mind in the dead of winter.

To Blakemore, who realized after a couple of screenings that, in his words, "Indians, Oh my God, they're all over the place in that movie," the film is "about the genocide of the American Indians." Cocks, seizing on Jack Torrance's German typewriter and the film's occasional use of the number 42 (as in 1942), sees The Shining as "a deeply-laid subtext that takes on the Holocaust." Weidner has perhaps the wildest theory: that Kubrick helped fake the Apollo moon landings while making 2001, and though he could never tell the truth about that job, he inserted various clues and explanations into The Shining as a kind of apologia.

It is, without question, easy to chuckle at both these far-out notions and the intensity with which their champions pronounce them; "It's certainly not accidental!" insists one, after a particularly wild leap of logic. Much of Room 237 can be viewed with a smirk, and director Ascher occasionally gets an easy laugh by doing just that (a cut-in from the film, say, of Jack Torrnace's "Anything you say, Lloyd!"). Except... well, it is a movie filled with weird, inexplicable touches (all right then, why is Jack reading a Playgirl in the hotel lobby in front of his new bosses?) and discrepancies that could be written off as continuity errors by a filmmaker who wasn't notorious for his perfectionism.

Ascher's approach (he also edited) is ingenious. His interview subjects never appear on film; there are occasional visualizations created for the film, but for the most part, he relies entirely on a montage of clips from The Shining--slowed down, sped up, ran backwards, superimposed, manipulated--as well as snippets from other films, particularly those from elsewhere in the Kubrick and Nicholson oeuvre. For the film in question, he will zoom in and isolate props, set dressings, and gaffes (often by drawing little squares or highlighting with arrows); the questions of the Overlook Hotel's geography (excuse me, the issues of "synchronous space") are explained by Kerns's detailed 3-D illustrations of the layout. His cutting and assembly is masterful--the film becomes something akin to a PowerPoint presentation of cinematic obsession and scrutinized theory.

What is wonderful about Room 237, however, is that it is not just about Kubrick, or his King adaptation. By the time this enthralling picture is in its home stretch, it has become a sly commentary on the entire act of criticism and analysis--of the line between the insightful and the ridiculous. It's a line that grows finer all the time. Last year I read an article that claimed Michael Jackson's 3-D Epcot music video Captain EO was full of parallels "between [its] message and the metaphysics, cultural presence, and the structure of the NGO." That's just poppycock, of course, and so is much of what's in Room 237... perhaps. "The act of observing affects the thing observed," notes one of the theorists in it, and yes, now that you mention it, it does seem strange that he changed the room number from 217 to 237, partuclarly since the distance from the earth to the moon is 237,000 miles, and the key on the door reads "ROOM No 237," and you can rearrange those letters to read "MOON," and... well, you get the idea. With any other filmmaker, this stuff would just sound absurd. With Kubrick, who knows?