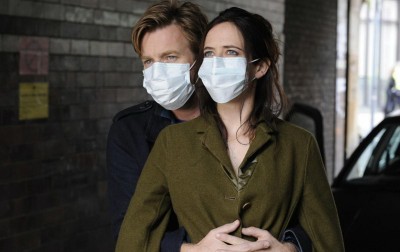 David McKenzie's Perfect Sense tells a cold, frightening story with a sense of logic that is utterly arresting, and a refusal to soft-pedal its trajectory. It is not--contrary to the romantic-embrace print ad campaign, emphasizing sexy stars Ewan McGregor and Eva Green--an upbeat picture. "Without love there is nothing" reads the tagline, and whether or not that's true, the film itself presents a pretty persuasive dramatization of the inverse: a world where there's not much left but love, and who knows how much that's worth.

Michael (McGregor) is a chef; his restaurant is near the apartment of Susan (Green), a scientist. As the story begins, she's been made aware of a strange and sudden outbreak across Europe: out of nowhere, people have lost their sense of smell. SOS, it's called, for Severe Olfactory Syndrome. The infected are hit with a powerful wave of emotion, grief for a lost loved one, the stirring of a strong memory, and once they're done weeping, the sense is gone. The attachment of memory to smell is not accidental--once they can no longer smell, the moments that are tied to those aromas seem tenuous as well.

Michael and Susan have just met as the outbreak begins, and they find comfort in each other. The script (by Kim Fupz Aakeson) takes a quiet, flat, businesslike approach to the epidemic--it just comes on, and that's that. Aakeson and director McKenzie let the virus slowly reveal itself, the symptoms growing more horrifying (and, frankly, more repulsive) as it mutates; after removing the sense of smell, the taste buds go next, and then hearing. People wear surgical masks, as if that matters. An aura of hopelessness and despair settles over the characters--and the film.

All of this sounds horrifyingly depressing, I'm sure, but McKenzie somehow manages to keep it all aboveboard; it's an elegiac picture, but not a dreary one. The mood is somber, sure, but there are flashes of warmth and humor, most of them courtesy of his charismatic leads. McGregor, thankfully sporting his native Scottish accent (his Trainspotting co-star Ewen Bremner also makes a welcome supporting appearance), takes a terse, direct run at the role, and thus keeps the character's occasional zigzags credible. Green, meanwhile, projects an intelligence and sensitivity that matches her ridiculous beauty. They're a good combination, and give us a rooting interest in the outcome.

McKenzie's direction is mostly of the observational variety; his flourishes come in the presentation of the symptoms, particularly when everyone starts to lose their hearing and the filmmaker strips our sound away too. It's a smartly subjective move--and a pretty bold one to boot, allowing a longer stretch of pure silence on screen than we're used to (or comfortable with, which gives the sequence an extra kick). The film is interspersed with voice-overs by Green's character, and they're somewhat less successful; they too often play as spackling to fill in the narrative gaps, or at the very least, giving a global/macro context that's much less compelling than the ground-level view that the narrative itself leans towards.

The most intriguing quality of Aakeson's script is its unblinking logic; it arrives at conclusions that cause us to nod and agree. Yes, of course, we think, if people suddenly couldn't smell, then the food would probably get spicier and sweeter, that makes sense, and if everyone went deaf, then the music would become drum-heavy, because that's all about vibration, and yes, after all of this, people would expect that blindness was coming next, and would prepare for it.

Sure, the story has a bit of a spare-parts feel to it, recalling Blindness, Children of Men, Contagion, and other efforts. But Perfect Sense carries its premise all the way through to its sensible conclusion, and in doing so, arrives at a kind of unexpected beauty and truth in its closing passages. This is an off-kilter film, and one that's hard to get your arms around in many ways. But it's a rewarding picture, and a thoughtful one, which is rarer than it should be.