Girl on a Motorcycle: Remastered Edition 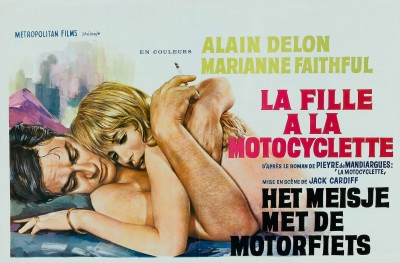 In Craig McCall's documentary Cameraman: The Life and Work of Jack Cardiff, the focus is, as it should be, on Cardiff's work as a cinematographer, most memorably on Powell-Pressburger classics like The Red Shoes and Black Narcissus. The film gives much less attention to Cardiff's work as a director in his own right, and the most skimmed-over of all his own films is 1968's The Girl on a Motorcycle, which is represented only by a quick, near-subliminal glimpse of a couple of posters. Now, Kino Lorber is bringing it out of the shadows, inaugurating its cult-underground "Jezebel" imprint with a Blu-ray edition of Cardiff's seldom-remembered foray into the psychedelic-saturated free love of the contemporaneous youth culture. The film, which stars French heartthrob Alain Delon (L'Eclisse, Le Cercle rouge) and pop singing sensation/future hardbitten, addict-recovery empress-heroine Marianne Faithfull (Made in U.S.A.), was butchered for its original U.S. release and retitled Naked Under Leather -- acts of revision Cardiff hated. The censorable bits are, indeed, vital to the film's allure (it would not make sense and would barely have a reason to exist without Delon and Faithfull's casually nude lovemaking scenes), but the alternative title fits like Faithfull's character's skintight leather bodysuit. The Girl on a Motorcycle wants to be Weekend or Easy Rider (a film it anticipates in some significant ways), but it's much more Faster, Pussycat! Kill! Kill! -- all teasing suggestiveness, skin, and more or less cheap thrills played out in an only-on-celluloid wet-dreamscape, in this case the foggy old-world glamor of Alsace, Switzerland, and southern Germany. 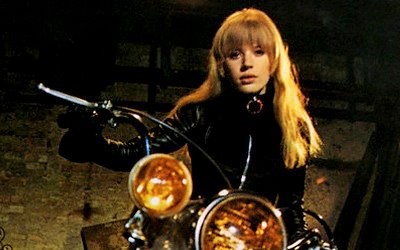 But despite the film's failing in its undercooked, overripe grasping for statements and significance, its accidental near-pure sensationalism, cheesy as it is, attains a kind of truly sexy, vintage-romance, overdone tragic-youth aura that makes it fairly delectable in spite of itself. That's much more thanks to its tactile, physical qualities -- Cardiff's playing with fast-flying camera, odd perspectives, allusive framing/composition, and vivid colors; the New Wave-drunk editing; and of course those decadent middle-European ski resorts, cobbled streets, and chalets that provide an already-sensuous backdrop, which Delon and Faithfull's moist, undeniable, insatiable passion proceeds to eclipse in its turn -- than to the adaptation by Ronald Duncan (re-adapted by Cardiff on the fly, and it shows) from La Motocyclette, a naughty French novel by André Pieyre de Mandiargues. The story has very Now, chic young people playing out a very 19th-century-novel scenario (with lots of newly permissible sexual detail, of course): it's nothing more than a love triangle (or a love square, if you include the ultra-symbolic Harley Daniel (Delon) gives Rebecca (Faithfull) as a perverse wedding present) combined with an even hoarier softcore trope, the sexual budding of a lovely young nymph. (If all those people who crossed state lines to see I Am Curious (Yellow) had seen what they thought they were going to see, this is much more what it would've looked like). Rebecca is a virginal, miniskirted salesgirl in her boring old father's (Marius Goring) bookshop in Switzerland, engaged to a boring old schoolteacher, Raymonde (Roger Mutton), of whom her father approves. Shortly before the upcoming wedding, circumstances conspire to allow frequent, flirtatious bookshop customer/libertine philosophy professor Daniel, to whom Rebecca is overpoweringly attracted, into her bed in Raymonde's stead, and she's hooked. However, the philosophy of the lovelorn Daniel, who apparently suffered some past heartbreak from which he will never recover, encompasses the two kinds of love best suited to a European art film, free and doomed, and Rebecca -- who marries Raymonde anyway but frequently dons an Avengers-style motorcycle suit to zoom from their sleepy Alsatian town over the German border to picturesque Heidelberg, where Daniel and torrid sex await -- is torn between the emotionally healthy, sexually unfulfilling husband and the emotionally (and, perhaps, otherwise) sadistic Daniel and with orgasmic physicality. 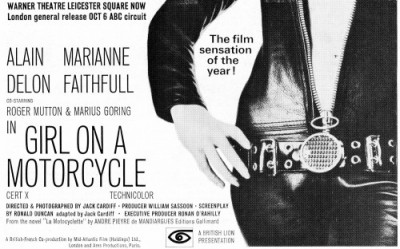 All of that plays out in layered flashbacks from the controlling narrative frame of Rebecca racing one more time down the highways toward the destructive, irresistible lover she's tried and failed to swear off. The flashback structure works okay, but the silliest thing in a film not lacking in unintentional humor is Rebecca's reminiscing and declaiming voiceovers, which Faithfull is required to "emote" to in ill-advised close-up. This amounts to pouts, poses, and insane-looking grins, so much that you wonder how Rebecca could possibly be driving at the same time; it can only come off as too much, parodic, an exaggeration/satire seen on Simpsons. The other tacky-in-retrospect devices -- the sub-Bunuelian sexual-dream sequences, Les Reed's overbrassy, much too groovy score -- are less grating and of more interest; they supply vintage appeal or clumsy but charming naïveté rather than flat-out incompetence. The cherry on this frozen-in-time cake is Cardiff's censor-thwarting use of "solarization" -- an infrared-like effect that kicks in during the film's more especially intense erotic moments, disappointing our baser curiosity but allowing Cardiff to make an explicit film releasable and, on that one isolated technical point only, placing it in the league of 2001, the other film from 1968 to employ solarization. (You'll recognize it from the "beyond Jupiter" sequence in Kubrick's picture.) 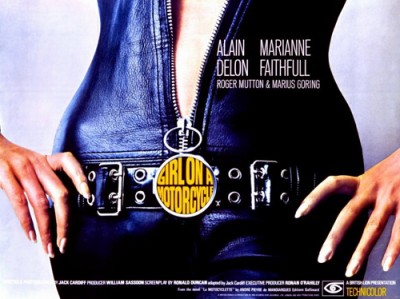 The Girl on a Motorcycle is ultimately one sexy, ludicrous, super-retro hodgepodge, but it's a winning one that's easy to have affection for. That affection begins, of course, with Faithfull's Liv Ullman-like maidenly beauty being unpeeled from its bursting, shiny leather encasing to be entangled with Delon's own smoldering sensuality, but even when they're apart (and despite its humorously misguided stabs elsewhere at worldly "sophistication"), the film gets by on a guilelessness that makes its shortcomings somehow more cute than obnoxious. At one point, Rebecca's voiceover, after sneering at the "cemetery" of a town her husband has brought her to and congratulating herself on her own impulsive, free-flying naughtiness, declares, "Rebellion's the only thing that keeps you alive!" as she roars away from the village down the highway, and it's in that kind of attitude, unbridled sexiness, and dynamism -- not in its third-rate narrative, philosophical, and political flounderings -- that the film itself reaches its fullest, considerably gratifying throttle.


The AVC/1080p transfer, at the theatrical aspect ratio of 1.66:1, preserves those crazy psychedelic colors and the particular tone and temperature of the film stock of the time, which all stand out beautifully, with no video artifacting discernible. They may have erred a bit on the side of caution when digitally noise-reducing the film, which can remove too much of the true cinematic texture, but there's enough of that celluloid feel left not to complain too bitterly.


Sound design is not necessarily the film's strong suit (it seems to have been mixed for much greater emphasis on the music than the dialogue, which may have been both purposeful and wise), but the disc's DTS-HD Master Audio 2.0 soundtrack preserves the film's original mono with absolute fidelity.


--An audio commentary track featuring the late, great Cardiff (presumably recorded for some earlier UK DVD release), in which he recalls his late-in-the-game but quite engaged and enthusiastic involvement in the project, including casting Alain Delon himself and (not surprisingly for a man so much better known and regarded as a cinematographer than as a director) dozens of fascinating technical insights and logistical reminiscences, not to mention juicy tales of getting around the censors and Mick Jagger's on-set visits to then-girlfriend/drug pal Faithfull. The rather more tentative (and sometimes overly glib, careless) manner in which he discusses matters of script, dialogue, and performance are also revelatory vis-à-vis the film's strengths and weaknesses.

--The hyperbolically narrated theatrical trailer (which also, at the very end, reveals an X rating for that original release).

A stills gallery featuring international promotional materials for the film (including a poster for the notorious, butchered, Cardiff-despised Naked Under Leather -- not at all badly designed, actually, as far as the poster goes) and a few well-chosen photos from the film. 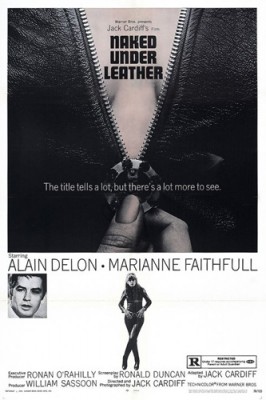 
A strange, sexy curio from the swinging psychedelic era, The Girl on a Motorcycle achieves a peculiar beauty in some stretches thanks to director (and renowned cinematographer) Jack Cardiff's preternatural way with a camera. For the most part, though, it's camp; it would make an excellent B-picture in a double feature with an A-picture of Faster, Pussycat! Kill! Kill! (the fact that the latter is itself considered a great B-to-its-bone film tells you something about how short of its profound-youth-statement, tragic-romance ambitions Cardiff's picture falls.) It is incredibly fun to watch, though -- and not just to make fun of the unfortunate facial contortions Faithfull is called upon to effect as she mimes emotion in conjunction with her purple-prose voiceovers; beyond the interesting, playful, freewheeling, clearly New-Wave-inspired camerawork and montage, the film does actually offer some insight of sorts into where the dissatisfied, mostly inarticulate heads of the youth of 1968 were. Its crudeness is in good faith, and there's something naive and romantic about it -- "adolescent" in a way that's more touching than irritating.

The big bow on the package, of course, is the sizzling chemistry between Faithfull and Delon. Cardiff is not an actor's director, and even the great Delon is often stilted and silly when he's "acting" here, but their pairing creates a fire-and-ice eroticism that's palpable; The Girl on a Motorcycle is too dated and limited in its vision to be anything you absolutely can't miss, but that's not to say it doesn't have its aesthetic pleasures to offer, and you may want to check your pulse if the prospect of the young, fresh Faithfull and the inimitably handsome Delon together in the throes of passion doesn't rev your Harley's motor. It's not a "good" film, exactly, but it could be very good for what ails you. Recommended.