Walt Disney Studios Home Entertainment // PG // March 20, 2012 // Region 0
List Price: $49.99 [Buy now and save at Amazon]
Review by Stuart Galbraith IV | posted March 27, 2012 | E-mail the Author
There have been far too many "reboots," "reimaginings," and "reimagineerings" lately. And, anyway, aren't those terms merely euphemisms for "Sure, we've made truckloads of money, but we can generate even more dough starting over from scratch and marketing an 'event,' rather than a mere sequel"?

The Muppets (2011), the first new Muppet movie in a dozen years, looked like it was going to be emblematic of this creatively bankrupt process. Before its release, Muppets co-founder Franz Oz, who'd retired from the Muppets' world a few years ago and had nothing to do with the new movie, complained, "I wasn't happy with the script. I don't think they respected the characters." Fans and veteran Muppet performers cited a particular flatulence joke appearing in the The Muppets' trailer as an example of how writers Jason Segel (who also stars), Nicholas Stoller, and director James Bobin were supposedly cheapening creator Jim Henson's original concept.

That's all I knew ahead of time as I settled down to watch the Blu-ray of The Muppets with my four-year-old, figuring that probably she'd like it regardless while I scribbled away, annoyed at each upending of the original characters.

Instead, I hardly took any notes at all - I was having way too much fun. While imperfect, The Muppets is funny and very clever, with several outstanding musical numbers, sly but not obtrusive references to the past, an amusing take on present-day Hollywood, and by the end is even unexpectedly touching. Ironically, the film's main weakness is that it adheres to Muppet ringleader Kermit the Frog's past characterization a little too closely, with plot elements and a character arc very similar in some respects to those found in The Muppet Movie (1979) and The Muppets Take Manhattan (1984).

Disney's "Wocka Wocka Value Pack" includes the Blu-ray, a DVD version, a digital copy, and a downloadable copy of the soundtrack album. Picture and sound are tops, while the extra features are variable, for the most part geared to a broader, more family-friendly, less hard-core film-geeky audience, though most of it is still worthwhile. 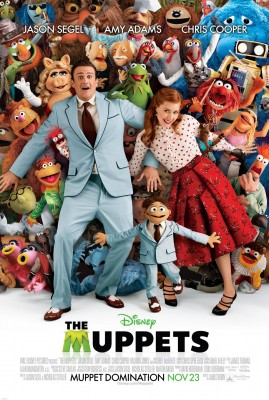 The movie is about the relationship between two inseparable brothers, Walter (performed by Peter Linz), born a Muppet, and Gary (Jason Segel), a human. They're residents of Small Town, USA, a throwback to '50s Americana, to Pleasantville, in scenes mostly shot on the Warner Bros. backlot. There, Walter is an obsessed fan of all things Muppet, especially the long ago cancelled The Muppet Show (1976-81). The Muppets only tangentially acknowledges the Muppets' later projects. Gary, meanwhile, is engaged to Mary (Amy Adams), who likes Walter but who constantly competes with him for Gary's attention. When the couple makes plans to celebrate their anniversary by taking a vacation trip to Los Angeles, Gary disappoints her by inviting Walter along.

When the three visit the Muppets' historic studio (played by the Charlie Chaplin Studios near La Brea & Sunset Boulevard, since 2000 home to the Jim Henson Company; The Muppet Show, however, was actually shot in England), they find the place dilapidated and all but abandoned. Walter, sneaking into Kermit's old office, overhears oil magnate Tex Richman's (Chris Cooper) plans to tear down the Muppets' old Vaudeville theater (from which The Muppet Show emanated) and drill for oil supposedly underneath. The only hope of saving it from the wrecking ball is if $10 million can be raised before a certain date.

Horrified while forgetting entirely the reason for the trip (much to Mary's distress), Walter and Gary approach legendary entertainer Kermit the Frog (Steve Whitmire) with the news and eventually it's decided to reunite the old gang for a big, network telethon, an entertainment extravaganza formatted just like the original Muppet Show.

What might have been awful instead is a charming (and, by and large, impressively CGI-free) viewing experience. The Muppets' part of the story shares some similarities to both The Muppet Movie (1979), an "origin" film that like this has Kermit bringing together the various Muppets from disparate locations and occupations; and The Muppets Take Manhattan in terms of its "let's put on a show" narrative and especially Kermit's angst. His self-doubt and tendency to mope around was an adult but nonetheless curious component of the Henson films, and turns up again here. Mickey Mouse, the center of Walt Disney's universe, was and is forever cheery and indefatigable, but Kermit's character is more akin to gloomy, perpetually depressed Charlie Brown, an approach perhaps seeded in Kermit's existential '70s signature song, "(It's Not Easy) Being Green," which debuted way back on Sesame Street. But what worked for Charlie Brown and the characters of Peanuts doesn't come off as well with Kermit, who at times just seems like a big whiner who gives up too easily.

Similarly, all the business with Chris Cooper's oil tycoon drives the plot but otherwise doesn't add much. There's some attempt to overcome this, most notably a startling rap number Cooper performs with surprising authenticity.

Those are about the only missteps in this otherwise terrific movie. The Small Town scenes at the beginning are playful instead of cynical and condescending, while its depiction of Hollywood is witty and spot-on.

The movie is respectful and full of nostalgia in all the right ways. It's easy to forget that even when it was new The Muppet Show was a throwback to Vaudeville, a style of live entertainment already passé by more than 40 years when The Muppet Show debuted. It's calculated and manipulative, sure, but its lack of cynicism and smarminess, combined with a resolute determination to avoid CGI shortcuts and to embrace an older, more traditional way of moviemaking is a real breath of fresh air.

(And, speaking of fresh air, Fozzie's "fart shoes," turn out to be much ado about nothing. For starters, the shoes in question aren't much different from whoopee cushions and besides, Fozzie's supposed to be an unfunny comedian with lousy ideas.)

There are many interesting and touching references to the past. For instance, Richman's attempted takeover hinges on a clause in the standard "rich and famous contract" Kermit signed in The Muppet Movie (for studio head Orson Welles), and the new film reprises both the theme from The Muppet Show and, beautifully, "The Rainbow Connection" song from the 1979 picture. Indeed, with its gently humorous references to the past, including a very '80s robot, the movie is like Toy Story 3 in that it's nearly more for adults than children. My four-year-old liked it, but I probably enjoyed it a bit more than she did. (But not Fox Business Network anchor Eric Bolling, who labeled the film the work of communists because of its unflattering depiction of oil speculators. How quaint.)

The new musical numbers are outstanding, among the best in the past decade or so in this almost-revived genre. The duet "Man or Muppet," performed by Segel and Linz, won the Academy Award but the real showstopper is "Life's a Happy Song" (written by Bret McKenzie) performed at the beginning and reprised for the finale. "Pictures in My Head" (by Jeannie Lurie, Aris Archontis, and Chen Neeman), also resonates strongly.

A region-free disc, The Muppets on Blu-ray looks and sounds great. It's especially nice to see the Muppets themselves (and their often custom-made universe) with such rich color and in such detail as to appreciate the craftsmanship of their designs. The film is presented in 1080p with a 1.78:1 aspect ratio. Audio includes 7.1 DTS-MA in English and French, an English DVS 2.0 Dolby Digital option, and a Spanish 5.1 Dolby Digital one, along with optional English SDH, Spanish, and French subtitles. For the record, the DVD is Region 1 and is 16:9 enhanced.

Supplements include gimmicky featurettes, most in HD, that have the Muppets in character, including a short behind-the-scenes documentary, deleted scenes, "screen tests," a blooper reel, trailers (Muppet spoofs of other movies), an audio commentary track (with Segel, Bobin, and Stoller), a "read-through" with the Muppets, and an extended version of Cooper's rap number.

Far better than one might have expected, The Muppets is one of last year's best surprises and a can't-miss title on Blu-ray. A DVD Talk Collector Series title.