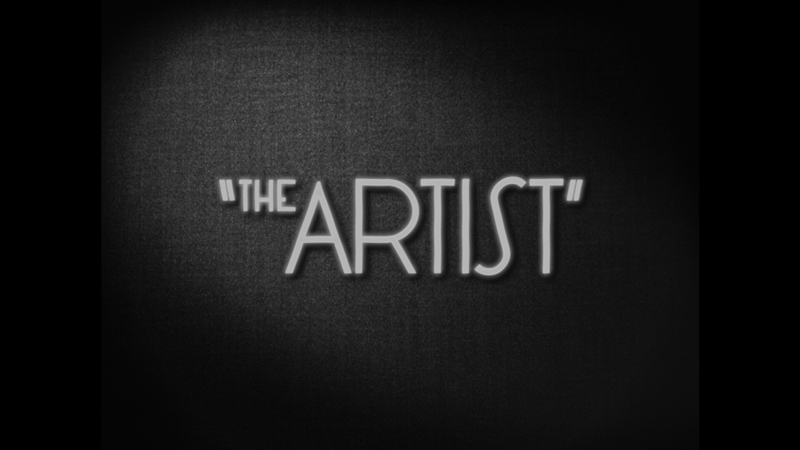 
The Movie
Flipping over the slipcover on this release reveals a pile of plaudits, from several "best movie of the year" declarations to 28 major award wins, including five Academy Awards, seven BAFTAs, three Golden Globes and more. It's unlikely that any film in the past year has been feted quite as highly and frequently as The Artist. But then, that's to be expected. When you make a movie that puts filmmaking up on a pedestal and blows loving kisses at it for 100 minutes, its very form a tribute to the industry, you can be sure that, if it's half good, the award voters in that industry will eat it up. Thankfully, it is an impressive achievement, but it's difficult to say it's as good as the mantle of praise its been blessed with would indicate.

At its essence, The Artist is about the power and beauty of movie making, but more immediately it's the story of George (Jean Dujardins) a top actor in the age of silent films. He's at the top of his game, but the game is about to change, as his studio (led by John Goodman) goes all-in on the new technology of "talkies," where instead of dialogue cards, the audience will actually be able to hear the actor speak their lines. He's not interested in this new world of sound, but the people are, as evidenced by the rise of Peppy Miller (the stunning Bérénice Bejo), a striking ingenue who rides the new sound of movies to the top. The only thing the two have in common is a chance meeting when George was on top, and Peppy strived to get there.

George's struggles in this scary new world are far too reminiscent of the entertainment studios' reaction to the growth of the internet, as he attempts to first ignore it and then combat it the same old way, which makes a story about the 1930s far more relevant than one might imagine. As he spirals down, losing work and friends, as well as part of his sanity, it would be easy to dismiss this as simple melodrama, but Dujardins makes you feel for George through his expressive performance, while Bejo (who happens to be writer/director Michel Hazanavicius' wife) exudes such warmth and charm that if she is pulling for George, that you feel you should too. 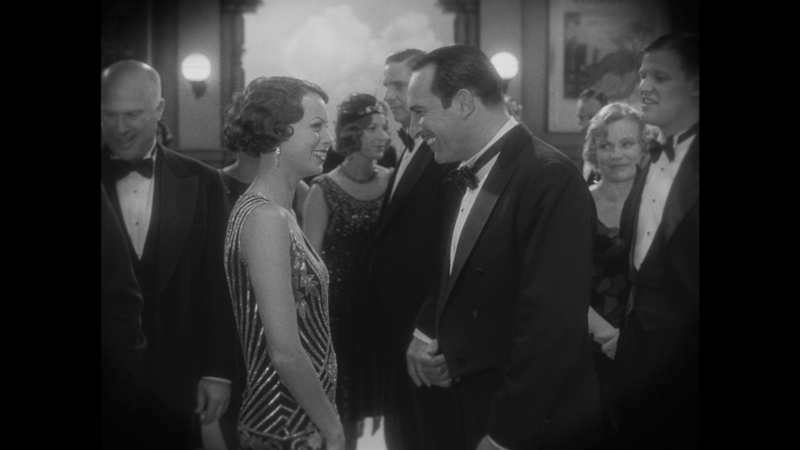 Though the story of the fall and rise of George Valentin is an entertaining one, this could have been just another game of inside-baseball for the movie industry if it wasn't for the film's grand gimmick, presenting the story of the demise of the silent film as a silent film. Wallpapering the film in evocative musical score (probably the most important part of the entire production outside of Dujardin's face) and reining in the potentially over-the-top acting, while replicating the aspect ratio, lack of color and hallmarks of the era, makes for a novel film that surprisingly watchable in today's age of the bombastic movie presentation. There are some moments in The Artist that would slot in perfectly in any old Buster Keaton film, yet it doesn't feel old or hackneyed, thanks largely to the work (and charm) of the two leads. (One also can't forget the fine use of Uggie, a Jack Russell terrier who gets plenty of screentime and brings a lot of heart to George's dark world.)

Unfortunately, it feels like too much of what makes The Artist so exceptional is in the craftsmanship rather than in the quality of the actual product as a movie. Hazanavicius and company do an outstanding job of capturing the look and feel of the time, and replicating an era-appropriate silent film to a nearly fetishistic degree, but the story can get a bit stuck in place, especially in the final third of the film, where it seems like things get a bit drawn out in service of hammering home George's downward slide. Perhaps I don't have the attention span required to truly enjoy a silent film, but then many of the best comedies of the era checked in at just 70 minutes, so maybe this is just padded out a bit.

Without giving away too much, part of the problem might be in how the gimmick is handled over the course of the film. The ending of the film, which is directly tied into the way the film was made, just felt disappointing, which is a pretty big problem considering it's the payoff to a film-long theme. While what happens makes perfect sense in the course of the story, and is pretty clever, it goes on a few beats too long, dampening its effect. An earlier cut to black would have made what what is now an amusing wrap-up, into an emotional knock-out punch, delivering on a promise that gets compromised a few times on its way to the finale. To put it in a hopefully spoiler-free way, if you can't go all the way, why bother starting the journey? 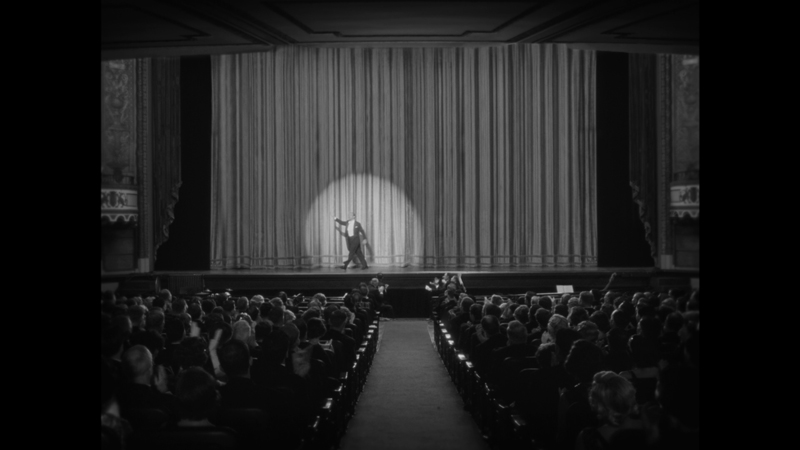 The Disc
A one-disc release in a standard-width Blu-Ray keepcase, this package is wrapped in an attractive slipcase covered in mirrored foil, with an opening, velcro-held front showing scenes from the film (while the actual cover in the case also is foil-enhanced.) The Blu-Ray features an animated menu offering options to watch the film, select scenes, adjust the set-up and check out the extras. There are no audio options, while subtitles are available in English SDH and Spanish.

The Quality
The 1080p, AVC-encoded transfer presents the 1.33:1 film quite well, making it look like the best-preserved old black-and-white film you've ever seen (though the Janus transfer of Carnival of Souls would give it a run for its money.) Every frame is loaded with detail (the street scenes especially) giving appropriate treatment to the impressive cinematography, gorgeous settings and detailed costumes, thanks to a rather high level of fine detail. The thing that the transfer does best is present the feel of an old movie, while maintaining the clarity of a modern film, with vignettes and collages that look fresh yet aged.

You'd think at this point, they'd have this sound thing down, but I couldn't hear a word of dialogue said. (I'm sorry. I had to. The opportunity doesn't present itself often.) Anyway, the DTS-HD Master Audio 5.1 track presents the film's score with impressive strength, but it doesn't do a lot in terms of the surround speakers. The clarity of the audio and the range, bringing the low-end into play, makes for a well-rendered presentation, but something approximating a live orchestra performance, filling out the soundfield boldly, would have been appreciated. There are a few little surprises along the way, but overall it's about quality, not quantity (or in this case, volume.)

The Extras
A quick blooper reel (running a bit over two minutes) is evidence that sound is a pretty big deal after all, as these screw-ups are hard to understand without hearing what was screwed up.

Hazanavicius, the majority of the cast and film historian Wade Major bring their thoughts on the film and the history of film to "The Artist: The Making of an American Romance," a nearly 22-minute look at the making of the film and the films that inspired it. It's quite cool to hear from Goodman, Malcolm McDowell and James Cromwell on the topic of silent film, as well as to see color footage from the set.

A post-screening Q&A with much of the cast and some of the crew (sadly, Goodman is not on hand) is hosted by California public-radio station KCRW's Matt Holzman, and spends almost 45 minutes exploring the making of the film, including the casting and the power of pizza, as well as some introspective discussion of silent films versus modern films, with Cromwell coming off as especially impressive. Anyone interested in film should give it a look.

After the two larger pieces, "Hollywood as a Character: The Locations of The Artist" is quite a bit shorter at just five minutes long, but it's also more focused, sticking to the places in Los Angeles where the film was shot. There's more of a production element in "The Artisans Behind The Artist," a set of four featurettes totaling over 11 minutes in all, looking at the film's design, cinematography, costumes and music (which repeats some content from the other extras.) The thing that stands out most is a bit disappointing, as there are clips from what looks like a Q&A with some of the production team in the same location as the one on this disc. It would have been nice to include that session as well for the detail geeks among us.

Wrapping things up are a few promos for other films, as well as an UltraViolet download of the film. 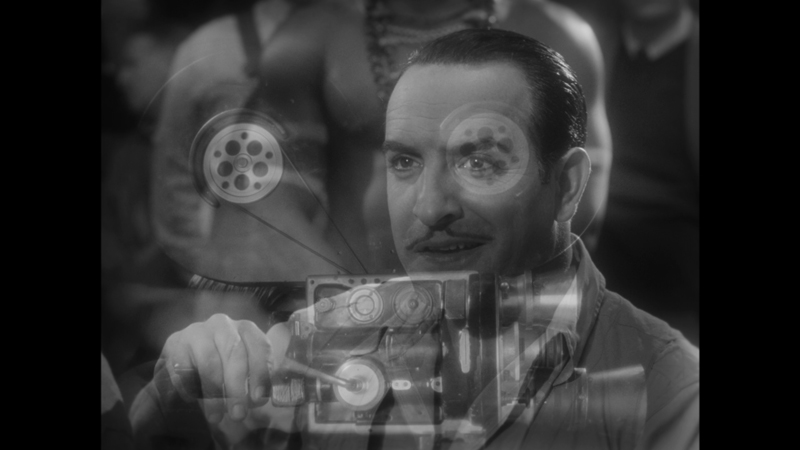 The Bottom Line
It would be incredibly difficult for a film to live up to the hype that The Artist's many awards brings with them, and though it gives it a good fight and delivers an interesting concept, in the end, it's more of a grand, entertaining, expertly-made novelty or experiment than a great all-around movie. This Blu-Ray presents the film gorgeously, and tosses in a nice selection of genuinely interesting bonus features though, making it well worth your time to check it out, whether you like silent films or not.