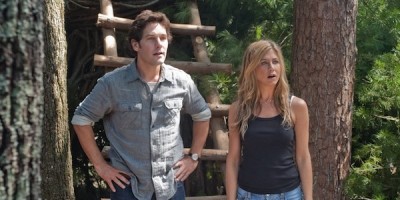 Third acts are a tough nut to crack in broad, raucous comedies. "A film going nowhere in particular," Joe Adamson wrote, "feels pretty sheepish about itself by the time it doesn't get there." He was writing about the Marx Brothers, but it's a dilemma that continues to plague mainstream comedy filmmakers to this day; a film can coast for a good, long while on funny ideas and inspired improvisations and the charm of its players, as David Wain's Wanderlust does, but the conventions of studio filmmaking and the expectations of a general audience mean that, incongruent as they may be with the free-wheeling nature of what has come before, we must have a conflict and a climax and a resolution, preferably a happy one. Would you believe that Wanderlust introduces an evil real estate agent halfway through? And breaks up the protagonists so that they can realize how much they really love each other? And reveals that a seemingly sympathetic character is actually a terrible person? You would, if you'd ever seen a movie before.

But before it shits the bed in its last half hour, Wanderlust is a legitimately funny and rather timely yuppie-panic comedy (a film that, in its best moments, recalls the Citizen Kane of the sub-sub-genre, Albert Brooks's magnificent Lost in America). Paul Rudd and Jennifer Aniston play George and Linda, a New York couple who take the apartment ownership leap (moment of recognition for New Yorkers: when they walk into the microscopic one-room dwelling and marvel, "Look at all this space!") mere days before George loses his high-paying job and Linda blows the chance to sell her documentary to HBO. Desperate and out of money, they move to Atlanta to stay with George's brother (co-writer Ken Marino). But on the way, they stop for the night at a rural bed and breakfast run by a happy-go-lucky commune. When things go south quickly in Atlanta, they decide to head back to the sticks and give communal living a try.

Much of this material works, for a variety of reasons. First and foremost, Wain and Marino adopt exactly the right attitude towards the assorted hippies and vegans that become George and Linda's housemates; they're working a very delicate line here, where they're certainly laughing at them (this is not a with them situation), but doing so without the cruelty that would immediately turn us off. Sure, they say and do ridiculous things--Seth, the non-leader (he insists there is no leader), says of sleeping in the rain, "I drink the nourishment that God is feeding us through her cloud teets"--but we also get the appeal of their way of life, and they are treated, for the most part, with affection.

The writing is also smart, unafraid of goofy detours and diversions, and there's real wit in the dialogue (I liked their realtor's insistence that their apartment was not a studio but a "micro-loft," or Rudd's argument with Alan Alda over the misuse of "literally"). And the performers are altogether engaging. Rudd and Anison have worked together quite a bit previously (they co-starred in The Object of My Affection, and he was a semi-regular on Friends), and their ease and comfort with each other is palpable in their on-screen relationship; he's also got some winning comic moments, like a spectacularly peculiar monologue into a mirror as he's psyching himself up for his first free-love experience, or the brilliant moment when that experience is proposed by the insanely attractive Malin Akerman (Wain's camera holds on Rudd's face... and holds... and holds). Aniston has some good moments as well, though she mostly plays straight woman--which is honorable and necessary--and even the supporting players are well-constructed: Marino's smug and vulgar, self-satisfied asshole, Michaela Watkins as his deeply unhappy and highly medicated wife ("I have mixed feelings about being a parent," she mumbles at the end of one scene, apropos of nothing), Kerri Kenney-Silver as their first point of communal contact (playing a very funny and very specific kind of unaware social awkwardness), and Lauren Ambrose, whose playing of her childbirth scene is a thing of utterly insane comic brilliance. (There are also a pair of barely-related appearances by Wain and his Stella/The State co-stars Michael Showalter and Michael Ian Black that may very well be the film's comic high points.)

There's so much of Wanderlust that is so good, in fact, that it is genuinely dispiriting to watch it sinking into a morass of inflated climaxes and truths told and lessons learned in its closing scenes. It's all so shopworn and perfunctory that it's hard not to suspect the interference of studio types (the picture was pushed back from more than one release date last year). Wanderlust has great comedy scenes, but its uninspired and perfunctory dénouement prevents it from being a great comedy.