Forgiveness of Blood, The 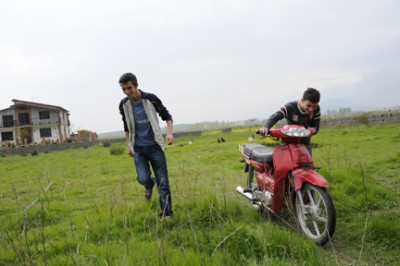 Joshua Marston's first feature, Maria Full of Grace, was the story of a Colombian girl who works as a drug mule. It was shot in subtitled Spanish, in spite of the fact that writer/director Marston hails from Beverly Hills. After it met with worldwide acclaim, robust box office, and awards recognition, one might think that the earnest filmmaker would choose to take it easy the next time around, to make something a little more accessible or blatantly commercial. One would be wrong. His new picture, The Forgiveness of Blood, takes place in northern Albania, and (as with his previous effort) it's not one of those films where the location is arbitrary, where Hollywood storytelling conventions are honored, or where everyone somehow mysteriously speaks English. It's a grim and difficult tale of old vendettas and even older customs. It's a powerful film, and a challenging one as well.

The focus is on a single Albanian family, living a modest rural life. Patriarch Mark (Refet Abazi) makes his living operating a horse-drawn bread cart, making deliveries in their village and in the nearby city. His route utilizes a shortcut through land his family once owned, which is now controlled by Sokol (Veton Osmani). Sokol tries to block the road, first with stones, then with intimidation, then with the threat of violence. An altercation with between Sokol, Mark, and Mark's brother (Luan Jaha) gets out of control, and Sokol is stabbed to death.

Because the story is told through the eyes of Mark's teenaged children, Nik (Tristan Halilaj) and Rudina (Sindi Lacej), the event in question occurs off-screen--though we see the tensions leading up to it, in scene-setting sequences early on (like an uneasy encounter between the families at a bar, where Sokol sneers, "You must be tired from moving the stones on my land"), the altercation is kept carefully away from their eyes--and ours. (This also serves to create some doubt as to what actually occurred.) Though they part company in that particular respect, Marston's film recalls the recent Iranian parable A Separation, another story of a domestic dispute that keeps getting further out of hand, partially due to the traditions of the land, partially due to the hard-headedness of the participants.

The brother is arrested. The father is not, but he must go into hiding, lest the death be avenged; his family, meanwhile, is forced to stay within the walls of their home. Nik is in particular danger--he would seem the most likely casualty of the blood feud, so he is forced to disappear from school (and from the life of his new girlfriend), and ends up going a little bit stir crazy during the self-exile. As a young woman, Rudina is on safer ground, and ends up taking over the bread route out of necessity, though she soon reveals a savvy head for business.

Marston's directorial style is intimate yet uninvolved; he's an observer, taking it all in, but from a bit of a distance. His aloof approach, and refusal to engage in easy exposition, can be frustrating (it takes entirely too long to piece together, from context clues, what this "besa" is that seems so important). But his anthropological eye and unromantic immersion is ultimately rewarding. In the extraordinary and pressing closing shots, we realize with some shock how much this experience had hardened both of our protagonists--how it's slowly drained them of their innocence, as the sins of the fathers are visited upon their children with an even greater expediency and immediacy than normal.