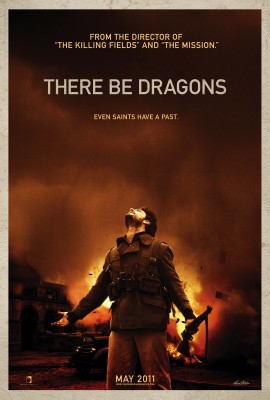 A Spanish journalist is tasked with writing about the life of Josemaría Escrivá, a Spanish priest who founded Catholic organization Opus Dei, in There Be Dragons, a film that approaches its Spanish Civil War and canonization subject matter a bit too stiffly. The film tries hard to cover its themes of duplicity and forgiveness with an even hand, but struggles under their weight. Director Roland Joffé, best known for The Mission and The Killing Fields, keeps the plot moving forward, but There Be Dragons is never particularly engaging.

Robert (Dougray Scott), the Spanish journalist, looks to his estranged father, Manolo (Wes Bentley), for help on his book about the possible canonization of Escrivá (Charlie Cox). Manolo grew up with Escrivá, and their friendship is explored through flashbacks set in the several decades before the Spanish Civil War. Manolo and Escrivá begin seminary together and their relationship shifts between that of close pals and one of contentious disagreement. Manolo grows cynical about his work and serves as a fascist spy inside a communist regiment during the war. Escrivá continues on as a priest, and starts a group that seeks holiness in all facets of life.

There Be Dragons quickly contrasts the paths of Manolo and Escrivá to make its case about forgiveness conquering all. Manolo falls for a Hungarian mercenary, Ildiko (Olga Kurylenko), and struggles to steal her affections from leftist leader Oriol (Rodrigo Santoro). He quickly becomes sympathetic to the cause, and inhabits the same violent lifestyle he once condemned. Escrivá's work comes at a dangerous time for priests, as the Spanish Civil War pitted anti-Catholic communists against a religious fascist sect, and his title put him at risk of being the victim of violence.

Although the events surrounding the story are quite turbulent, There Be Dragons feels tempered. Escrivá is basically a one-note character; all good deeds with no moral failings. That makes him untouchable and uninteresting. Escrivá eventually flees Spain and does his work elsewhere, but There Be Dragons never reaches inside the character to analyze his motivations and doubts. Manolo faces greater internal strife, and has to kill to survive. Although the movie is mostly about Escrivá, it is Manolo who loves, gets his heart broken and temporarily loses his humanity.

There Be Dragons is adequately shot and acted, and director Joffé's filming style is confident but not flashy. There are a few decent battle scenes, and the film benefits from some lavish costumes and sets. Despite the solid production values, something about There Be Dragons feels less than cinematic. Maybe it is the half-hazard manner in which the story unspools or the unchallenging portrayal of Escrivá. There Be Dragons does not push the faith it dissects upon viewers, but it does not skimp on championing the power of forgiveness and the resolve of the human spirit. Under all the postulating about Escrivá and his sanctity there is an interesting story that There Be Dragons never quite finds.

Fox delivers a mostly solid transfer for There Be Dragons, with a healthy bitrate on a dual-layer disc. The 2.35:1/1080p/AVC-encoded transfer is nicely detailed and supports the attractive cinematography from Gabriel Beristain. Colors are rich, fabrics are nicely textured and the transfer supports the chaos of war and beauty of Spain. Blacks are solid but crush slightly in some scenes, and I noticed a bit of aliasing on buildings and in trees. Edge enhancement and noise reduction are not an issue, but highlights look ever so slightly dingy in spots.

The 5.1 DTS-HD Master Audio soundtrack packs quite a punch. The wartime scenes are appropriately weighty, with aggressive LFE response and action effects that roll through the surround and rear speakers. Range is excellent, and quiet dialogue is balanced expertly with the more aggressive effects. The score is layered appropriately with the dialogue and effects, and the track is more immersive and aggressive than expected. English SDH and Spanish subtitles are included.

Only two bonus features are included: Facing Your Dragons: Inspiring Testimony from Wes Bentley (3:57/HD) is a short piece in which Bentley talks about his connection to Manolo and the process of portraying his character. Fox also includes some deleted scenes (30:54/HD) that add little to the final film.

The Spanish Civil War, Opus Dei and the recent canonization of Josemaría Escrivá are interesting topics dully explored in There Be Dragons. Set amid the messy conflict between fascists and communists, There Be Dragons contrasts Escrivá's life in the priesthood with longtime friend Manolo's work as a spy during the war. There Be Dragons gives Escrivá little depth, and its themes of betrayal and redemption are not subtle. There is an interesting story here, but There Be Dragons is never fully engaging. Rent It.