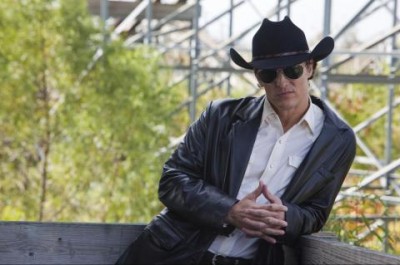 The opening titles are simple but accurate: "William Friedkin's Film of Tracy Letts' Killer Joe." And make no mistake--William Friedkin has made a film of it, but this is undeniably "Tracy Letts' Killer Joe." Adapted from the Pulitzer Prize winner's first play, it is a dark, twisted, chilling piece of work, and with this writer, that's saying something. It is also Friedkin's second film adaptation of a Letts play, after 2006's harrowing (and underseen) Bug. These are easily the two best pictures the filmmaker has made since his early-'70s heyday; he'd be wise to continue hitching his wagon to this particular writer.

It begins with fierce rain, crackling thunder, the frenzied barking of a chained-up pit bull. Chris (Emile Hirsch) is pounding on the doors of the family trailer home; inside, his father Ansel (Thomas Haden Church) and sister Dottie (Juno Temple) live with Ansel's second wife Sharla (Gina Gershon). Chris is in deep trouble; he owes money to local gangster Digger (Marc Macauley), far more than he can ever pay, so he's come up with a plan. Angry at his mother for stealing some drugs (which got him into the financial trouble), he discovers that little Dottie is the beneficiary of their mother's hefty insurance policy. No one would really miss her, Chris reasons to his father. If they have her killed, Dottie'll collect that insurance money, and they'll split it up.

The man Chris wants for the job is Joe Cooper (Matthew McConaughey). "Killer Joe's a professional," Chris insists. "He'll do this right." Joe is in a particularly advantageous position for a contract killer to be in, since it's a moonlighting gig; his day job is as a detective for the Dallas Police Department.

Joe's first appearance is beautifully prepared, a movie star entrance if I've ever seen one: all giant close-ups, his tight leather gloves, his cowboy boots, the badge and gun on his hip, the big black cowboy hat atop his head. McConaughey, an actor whom I've seldom admired, is astonishingly good in the role. He seems to be easing out of the romantic ingénue phase of his career, and not a moment too soon; last year's The Lincoln Lawyer allowed him to indulge slightly in the sleaziness that always seemed lurking under the surface of his vanilla leading man roles, and Killer Joe finds him not only embracing that quality, but taking that sucker out on the highway and seeing what it can do. He gives Joe a stillness, an understated menace at the center of his quiet line readings (a perfect one, entirely free of context: "No. No he was not all right. He set his genitals on fire"). This is a cold, icy fucker, and McConaughey's brutal portrayal of him is a revelation.

The ensemble around him is impressive as well. Gershon plays Sharla's trashiness without overplaying it, while Church contributes a comic performance that is infinitely funnier in its refusal to reach for effect. Hirsch makes for a good dirtbag in the early scenes, but he gets a bit too bug-eyed later on; we catch him trying too hard. But the showcase actor (aside from McConaughey) is Juno Temple, whose big, spooky, unpredictable work as Dottie is infinitely intriguing and entertaining. You never know whether she's coming or going, which makes her "date" with Joe all the more unnerving.

Director Friedkin and screenwriter Letts have opened up the play a fair amount--unlike Bug, where they kept the single setting and squeezed it like a vice. But Killer Joe doesn't feel falsely or arbitrarily expanded, the way film adaptations of plays often do, and when they reach the memorable and deeply disturbing climax, they don't step foot outside of that trashy trailer home. Anyone who has seen (or read) the play will appreciate the deliberateness with which Friedkin frames--literally and figuratively--the notorious chicken leg, and how he slowly and methodically builds the three-handed dialogue between Joe, Ansel, and Sharla. It's a tough sequence to watch, the movie going absolutely batshit insane with bad behavior and unrepentant, bloody brutality, but there are moments that sift in the blackest of black humor. This is dark, difficult material, and as the cast finally sits down for a dysfunctional "family dinner," the audience is frazzled, knowing this thing could go absolutely anywhere. My stomach, for one, was all tied up in knots, and it's rather remarkable, how Friedkin manages to never lose control of a story that goes this far off the rails. Many people will find it ugly, hateful, and vile. But those who have the constitution for it will find it thrillingly audacious.