Universal // Unrated // March 6, 2012
List Price: $14.98 [Buy now and save at Amazon]
Review by Tyler Foster | posted March 13, 2012 | E-mail the Author
Note: I have to point out that DVDTalk's Jamie S. Rich wrote up the Criterion Collection's Blu-Ray release of Charade last year, and I think his review's better than mine, although newcomers may want to skip the quote at the beginning of the review if they don't want a big reveal spoiled. 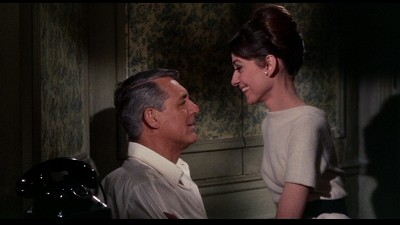 Having grown increasingly tired of her busy, no-show businessman husband Charles, Regina Lampert (Audrey Hepburn) returns to Paris from a solo vacation ready to file for divorce, only to discover someone has turned her into a widow instead. The French police inspector in charge of her case (Jacques Marin) suspects she knows something about Charles' four passports and the $250,000 Charles gained from selling all of he and Regina's worldly possessions, but she doesn't, and things only get worse when three of Charles' slimy war buddies (James Coburn, George Kennedy, Ned Glass) and a CIA agent (Walter Matthau) all show up looking for the money too. Only the developing relationship between Regina and new acquaintance Peter Joshua (Cary Grant) helps to relieve some of the tension...until it looks like he may not be who he says he is either.

With equal measure of wit and thrills, Charade is a wonderful burst of twisty fun that's perfectly summed up by those spinning arrows in the opening credits. Not only does Cary Grant's man of mystery go through several identities and loyalties throughout the film, all while repeatedly (but not too insistently) brushing off Regina's advances, but the film deftly segues between light, frothy romance and dark tension, without either mood stumbling over the other one, thanks to the powerhouse cast and excellent direction by Stanley Donen.

The film is built around the chemistry between Hepburn and Grant, and they certainly have plenty of it. Fans of rapid-fire dialogue will be over the moon during the pair's constant playful banter, which starts the moment they meet (while Regina is still on vacation), and doesn't stop until the last line of the film. Grant was reportedly concerned that he'd look creepy courting someone so much younger than him, so Donen and screenwriter Peter Stone gave all the courting to Hepburn, whose starry-eyed infatuation is just the right match for Grant's laid-back, slightly weary amusement. 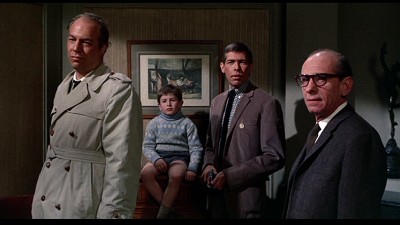 What's particularly clever of Donen -- and what keeps the movie consistent -- is his knowledge that the audience will like Grant and Hepburn together regardless of whatever lie Grant's been caught telling next: "the man's the same, even if the name isn't."

The three villains make for a nice tonal blend as well. Kennedy is Herman Scobie, a brutish man complete with a hook hand and a scowl that never goes away. Coburn is Tex Panthollow, a charismatic but intensely creepy man who corners Regina in a phone booth and drops lit matches into her lap. Glass, last but not least, is Leopold Gideon, whose Woody Allen glasses and small stature hide his wicked sense of humor. It's an unusual but extremely memorable rogues gallery that has the unique position of simply occupying the hotel rooms next to Regina: they need the money, and she needs to know they're watching, and they all end up doing more talking than running from one another (although Grant and Kennedy have a nice rooftop fight that is simultaneously more and less violent than one might expect). They're also not left out of the film's witty dialogue (I particularly like Tex's bitter comment, "...and you fell for it, like an egg from a tall chicken!")

In 2002, Universal tried to remake Charade as The Truth About Charlie. Although I know at least a couple of people who will defend the stylistic merit of Demme's version, the original Charade isn't so much about the story or the characters, but about the tone, the mood, and the two stars and director who set it, and what the film captures isn't something that can be replicated all that easily. It's a romantic comedy with some stakes, a thriller with charm, and it's still as wonderfully entertaining now as it was when it was made. 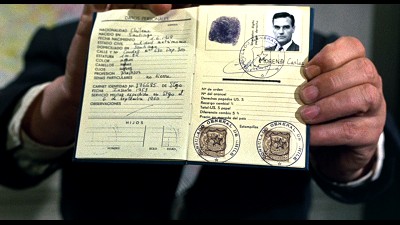 The DVD
As part of Universal's 100th Anniversary celebration, Charade gets their standard treatment: an attractive foil slipcover with banners on the top and bottom of the cover image (taken from the theatrical poster) noting the celebration. The front of the slip opens to reveal a little gallery and timeline, with an image of the aforementioned poster placed accordingly among the release dates of other important Universal features. A short summary and a couple of factoids about Charade are printed on the left side, and some about Universal in 1963 (the year Charade was released) are on the right. Underneath the slip, the same cover artwork is found without the "anniversary" branding, and the two back covers are entirely different. The disc comes in an eco-case (the kind that uses less plastic vs. big holes in the case), and there is an insert with a code for a digital copy and some other Universal promos related to their anniversary celebration.

The Video and Audio
I no longer own Universal's dual-sided DVD of The Truth About Charlie to compare, but I'm told it was a pretty dreadful-looking transfer, which is not surprising; Charade is a public domain title, and therefore subject to any number of mediocre and sub-par releases. However, it would not surprise me to hear that Universal simply asked Criterion if they could borrow the fantastic new high definition master they did for their Blu-Ray release of Charade as a source for this 1.85:1 anamorphic widescreen presentation, because I looked at that right before receiving this, and (formats aside), they look essentially the same. Detail is strong, given the soft lighting that Donen and his DP Charles Lang have selected to bathe their stars in, and I didn't notice any artifacts or edge halos, but it's the eye-popping, reference-quality color that really turns this nearly 50-year-old film into something that looks like it was filmed yesterday.

Compared to the picture, the film's English Dolby Digital 2.0 audio track is not nearly as impressive, but it gets the job done just fine. Dialogue is bright and vivid, and Henry Mancini's wonderful score is given fair treatment, but I can't say there's much depth to the mix, which occasionally exhibits a bit of haziness that shows its age. 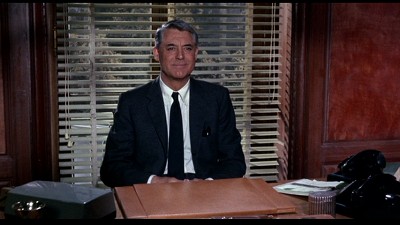 Still, I'm sure audiences would prefer a faithful 2.0 track over an unconvincing 5.1 remix. A French 2.0 audio track, French and Spanish subtitles, and English captions for the deaf and hard of hearing are also included.

The Extras
Given that the film is still actively being licensed to Criterion, it's no surprise (but still a bit of a disappointment) that Universal has not elected to create any new film-specific extras for Charade. Instead, we get the pre-packaged featurettes "100 Years of Universal: The Carl Laemmle Era" (8:43) and "100 Years of Universal: The Lew Wasserman Era" (8:51). They're not terrible featurettes, but they're kinda glossy and simple, and ultimately the kind of content that ought to be on a "Universal 100" website, not every single one of Universal's new DVDs.

An original theatrical trailer for Charade is also included.

Conclusion
It may be surprising to know that this edition of Charade is Universal's first release of the film all by itself (their only other edition is the one on the flipside of Charlie). There is, of course, Criterion's release of the film, but the only extra on their disc is an audio commentary by director Stanley Donen and screenwriter Peter Stone. If you're not the kind of viewer who tends to listen to commentaries, this Universal release features a comparable standard-definition transfer and nice packaging. Highly recommended.