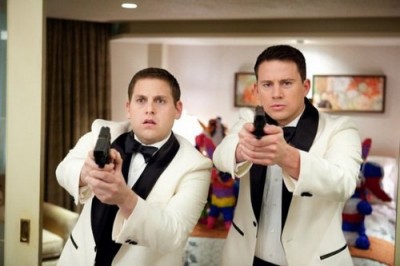 If it offered nothing else to be thankful for, one could applaud Phil Lord and Chris Miller's 21 Jump Street for giving us the most meta movie moment in recent memory. It comes early, when young cops Schmidt (Jonah Hill) and Jenko (Channing Tatum) are being reprimanded by their captain (Nick Offerman) for blowing an arrest by not reading the suspect his Miranda rights. (Jenko, not the brightest bulb, can't remember them: "They always cut away on TV before they finish 'em"). They're being reassigned, their boss tells them. "They're reviving a cancelled undercover police program from the '80s and reinventing it for a new generation," he explains, primarily because they're "completely out of ideas."

I've seldom heard an audience respond so warmly to a film's open admission of its own less-than-honorable reason for existence. Because the fact of the matter is, a 2012 feature film version of 21 Jump Street is indicative of a film industry desperate for familiar brands, convinced that leftover nostalgia for an '80s relic will propel audiences into seats. There's no reason that it should work--and indeed, had co-writers Hill and Michael Bacall (and directors Lord and Miller) taken the idea seriously (as seriously as, say, the original TV show took the rather fatuous central premise), this whole thing would be a disaster.

That, thankfully, is not the tack they took. 21 Jump Street treats the undercover-cops-in-high-school conceit with the silliness it deserves; it also pulls the neat trick of spoofing action movies while simultaneously functioning as one. The original show was about impersonating a high school student--the film is as much about impersonating a cop, reconciling the impressions of police work one has ingested from movies and TV shows (like Jump Street, even) with the less-than-glamorous reality of the job.

Granted, that's perhaps too close a reading of a film that includes a drug trip sequence where a character's head turns into an ice cream cone. 21 Jump Street is mostly just big, noisy, sly fun--a crowd-pleaser in the best sense. Hill and Tatum make a surprisingly winning comedy team, and the make-up of that team runs counter to expectation; it's not some sort of Abbott & Costello, handsome straight man/chubby funny guy combination, but one that finds beefcake Tatum every bit the comic match for his co-star. ("Chemistry's the one with the shapes n shit, right?"). He's funny and winning, primarily because Hill and Bacall's script pulls a clever turnabout: in this Glee-infested climate, artsy alt kid Hill gets popular, while muscular jock Tatum is an outcast.

The supporting cast is loaded with comic MVPs (the cast not only includes Offerman, but Rob Riggle, Chris Parnell, Jake M. Johnson, and not enough Ellie Kemper) and even a few faces from the original show. Ice Cube seems to have a ball playing the self-admitted "angry black captain," and Brie Larson, in what amounts to the romantic lead, is appealing.

Directors Lord and Miller come from the world of animation (their previous film was Cloudy with a Chance of Meatballs), and they load the picture up with terrific sight gags--there's a running series of explosion fake-outs that just sings, and the sight of the boys doing their pre-prom chores is priceless. What's more, their pacing is sharp as a tack; though the film runs a rather hefty 109 minutes, it never drags. It's mostly just very busy. The efficient opening barely takes any longer with the set-up than the trailers (they know what we're there for); the raucous house party scene packs more laughs into ten minutes than were found in the entirety of Project X.

Mostly, it's about effort. The makers of 21 Jump Street could have, I'm sure, easily grinded out a half-assed nostalgia effort, riffing on the TV show, doing some easy '80s gags, and called it a day. The fact that they instead took the opportunity to create a film with some actual wit and a genuine sense of fun is commendable. This is a picture that's far better than it probably had to be.